Login to add items to your list, keep track of your progress, and rate series!
Description
Are you a victim of unwanted spirit possession? Is there a ghost you need sent up and away...or down to burn for all eternity? If the answer is yes, then you need Muhyo and Rouji, experts in magic law. Serving justice to evil spirits is their speciality. 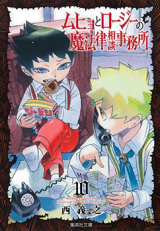 Note: You must be logged in to update information on this page.
Forum Posts Click to view the forum
Muhyo to Roujie, is anyone still scanlating it?
over 12 years ago

Very nice
by Yaoifangurl12
December 17th, 2019, 11:38pm
Rating: N/A
The art is not really that beautiful but the story line good.
Was this comment useful?  Yes

Very nice
by calstine
April 11th, 2017, 2:15am
Rating: 9.3  / 10.0
Muhyo to Rouji no Mahouritsu Soudan Jimusho is one of the (many) series I hold up as an example of why it's never a good idea to depend on rankings, comments or recommendations when picking out manga to read. Despite its so-so ratings, the lack of gushing comments, and the unimpressive number of people who're even aware that it exists, this is one of the better shounen supernatural titles out there, superior to plenty of higher-rated manga in the same genre.

Plot: Not what I'd term "brilliant," as there are no mind-boggling twists and the endpoint is fairly straightforward, but very satisfactory in the sense that Nishi Yoshiyuki has a clear idea of where he wants to go with the story and guides it unerringly in that direction. Not once does he introduce unnecessary spin-offs in an attempt to milk the cash cow -- which, for a Shounen Jump series, is one of the highest compliments I can give. The first three-and-a-half volumes follow an episodic format so as to introduce the reader to the world and the characters, but from the middle of the fourth volume onwards it takes off at a steady and apt pace until the main plot is over and done with.

World building: The refreshingly original concept of Magic Law in place of more typical methods of exorcism set the series firmly apart from others of its ilk. It's very creative and plenty of fun.

Characters: In the end, one of the things I loved the most about Muhyo to Rouji. Most of the significant characters have distinct personalities that don't conform to the usual shounen tropes, and each had a clear role to play in the plot; never did I find myself thinking "this character needn't have existed." The interpersonal relationships were also lovely: they're friends, family and a team. They help out with one another's work, provide emotional support when someone's down...and give each other a good talking-to when need be.

Action: In a welcome deviation from the standard shounen fight formula, all significant battles require equal amounts of strategy, skill and strength. So despite Muhyo's incredible talent and Rouji's vast reserves of power, other characters never felt superfluous: everyone pitched in with their own talents to help achieve victory.

Humour: The mangaka never aims for big laughs: instead, every volume has numerous instances of situational comedy worked in here and there -- and it worked like a charm to lighten the heavy atmosphere, especially later on. The character profiles, letters to the mangaka and Q&A sessions with the characters were inspired additions.

Ending: The only part of the series I didn't like, and the reason I can't give a higher rating. The penultimate volume dropped heavy hints that there would be a last, strongest opponent to come, but the finale didn't follow through on it at all. I think it'd have been better if those hints had been scrapped, because the rest of the story stood perfectly well on its own. As it is, Muhyo to Rouji ended with a huge "Will the future hold even more horrors?" hanging over the characters' - and the readers' - heads, which leaves you with an unnecessary sense of dread in the midst of an otherwise happy ending.

Conclusion: A very enjoyable ride. Recommended whether or not you're a fan of action shounen, as long as you enjoy the supernatural genre and don't expect a "super mature" (a la sex and heavy tragedy) reading experience.

Really fun read
by Daedalus
February 1st, 2008, 10:17pm
Rating: N/A
I'm only 3 volumes into this via the official American Translations but this is a really fun and great series. At 1st, it's easy to dislike Muhyo who is a very odd choice for protagonist..he's short, bizarre (I stop short of saying outright ugly) and he seems waaay overpowered. That said, he's also an interesting character and represents an interesting organization with the Executors. Roji's the gateway character for us readers and over the 1st 3 volumes becomes an interesting (if not constantly scared) character in his own right. All in all I think the artwork rocks..it's kind of a maurice sendak feel, the creatures are very disturbing for a kid's book and the situations/ storylines are really great set=pieces. I'm giving it an 8 because I'm still wanting more..I want to get a sense that this executor and rule of law for ghosts has a real architecture and logic too it...Naruto has spoiled me in fully developed worlds and I'd like to see Muhyo gain it as well. Likewise, for the love of god,,,of all the books turned into anime..this one screams anime adaptation..it's easy--why in the hell hasn't it happened yet?
Was this comment useful?  Yes

Nice
by Saexel
January 24th, 2008, 2:21pm
Rating: 9.0  / 10.0
I like it - So far I've only read the first two volumes but so far so good though I don't know how much the plot will develop later. Though some people may dislike the art I really like it. It's refreshing and a kind in which is distinguishable in comparison to other manga.

Good
by barbapapa
January 1st, 2007, 10:18am
Rating: 7.0  / 10.0
Refreshing Jump series. The first volume was random missions, but the following ones hint to more advanced storylines. So I can't really give my final judgement, and will probably edit this comment later on, but I'm enjoying it for now.

has its charm...
by Anonymous
August 17th, 2006, 1:08am
Rating: N/A
"...nonstop laughs and heartpounding action...". not really. there are better manga to look for that. but nonetheless, this is a good manga, though i can predict that a number of people here are gonna complain about the artwork.............
Was this comment useful?  Yes

Muhyo and Roji
by Mumba
August 14th, 2006, 12:54pm
Rating: N/A
very interesting start. i am looking forward to it.
Was this comment useful?  Yes