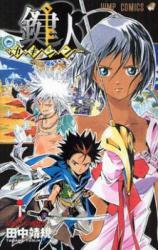 the way it ends makes u regret beginning it
by moomoo8
December 28th, 2009, 2:31am
Rating: 7.0  / 10.0
Like everyone said the oneshot was great! I began to read the actual manga because of this and well its not so great... I like the originality so i kept reading, but the ending is just disappointing because basically nothing happens.... for that reason i recommend just reading the oneshot its great. The series is tolerable but the way it abruptly ended just makes it a complete waste of time.
Was this comment useful?  Yes

Bwaahhaha~~~
by pinUp
December 3rd, 2009, 9:57am
Rating: 1.0  / 10.0
Bhwahahaha,i'am really glad this series only last 17 chapters , from the start i knew this series won't last long,why did the author makes this difference with the oneshot, ugly manga IMO
Was this comment useful?  Yes

AMAZING oneshot, terrible series
by Conquestor
November 7th, 2009, 1:06pm
Rating: 6.0  / 10.0
The one shot for this series was an amazing drama-esque story about a slave/experiment running away from an empire. The series adaptation completely changed the story, pacing, characters, and mood for the worse, and added completely different character designs (As much as I like catgirls, this story has no place for them). I'd definitely recommend reading the one shot, but you can skip the series.

What was he thinking!?
by nomated23
August 31st, 2009, 10:09am
Rating: 5.0  / 10.0
Well was really looking forward to this manga after i read the oneshot but that said i was disappointed with the transition from a oneshot to a series. The story has become utterly cliched and its just not exciting to read. The humor is painful, and the cahracters dont have any depth to them. also the action scenes are not as good a they could be. With a start like this i don't see the manga getting better in the future but who knows there might be a suprise in there. i give this a rating of five because of the orignality of the stroy but besides that there's nothing to keep you reading this one.
Was this comment useful?  Yes

*sigh Plz STOP COMPARING WITH THE ONESHOT. Thank you
by kirabook
August 11th, 2009, 3:46pm
Rating: 8.0  / 10.0
I really wish people wouldn't compare this series to the oneshot so much. So what if he changed the main character a little. It happens. Oneshots are oneshots, series are series. Seriously.

Anyway, I like it. It's pretty original. Probably completely orirginal because the only characters I know who fights with keys are in Kingdom Hearts games. lol. Looking forward to more chapters!

Unlike some of the other reviewers here, I actually enjoyed it a lot more; it's not uncommon for mangaka to make drastic changes (though I was really disappointed about the monkey. Seriously, WTF was with the dolphin?)so while I was a bit surprised, that didn't really have an effect on my overall enjoyment of the series thus far.

The artwork is pretty, the plot is interesting but the dolphin was wack. That's my opinion and that ain't gonna change.
Was this comment useful?  Yes

People are blind
by teniki
August 6th, 2009, 12:10am
Rating: 8.0  / 10.0
The one-shot was full of cliches. The fact that you guys even like the one-shot proves that most of the people who rated this poorly has bad taste. Monkey on shoulder is cliche and so is the pretty boy. The pretty boy also had the country girl personality by trying to save money to reach a better destination or place than the one she was born/raised in. Example can be found in the manga Shiki and many others.

Of course if you just like cliches like many shoujo fans or fans of copycat shounen manga then avoid reading this.

That aside, many jokes and scenes have an empty feeling to it. The characters need working on and may improve when the manga continues. Until then this manga gets an 8 due to originality and art.

Good manga. Not a bad manga.
by Daxisheart
August 5th, 2009, 10:47pm
Rating: 9.3  / 10.0
Guess what? It's a good manga. Three chapters are out, and
1) art is consistent. The background is done very nice, and some scenes are pretty epic. You can clearly discern which character's which. Shonenisque art, but still good. I like it.
2: Characters are okay. Only about three chapters are out, yet I some characters are pretty fun. Hell, there's even character development in those three chapters.
3: Plot is okay. It's paced alright, for the most part.

Guess what? I'M RATING THE MANGA. Did I say that I'm rating the oneshot? No, I didn't, cause I didn't read the oneshot, and I'm not rating the oneshot, I'm rating the manga for what it is, not comparing it. And what is this manga? It's a good manga so far with sorta believable characters and good art, and did not deserve those bunch of very bad using ratings cause it's compared with something it's not.

being stoic (don't know if this is the right description) is better expressed by the oneshot character (oh, btw he's much cuter and cooler than the latter)..between the monkey and the dolphin, hmm..i still like the monkey better..i understand if they want to balance the protagonist's overall "character" by adding a cutey sidekick..but for me, if the two of them squint their eyes, twitch their eyebrows, or make unpleasant faces in sync is more hilarious.

still, i like the plot so i can't brush off the series easily so i'm going to watch over it for little bit more and see how it develops.
Was this comment useful?  Yes