Login to add items to your list, keep track of your progress, and rate series!
Description
Hirose Goushi has a huge sister complex. So huge, he moves from his home town to Tokyo to attend Myouzen University in order to escape it!
Three years later, Goushi's little sister Noa shows up and informs him that she's taking the Myouzen University entrance exam and that she will be moving in if she passed. Little does Goushi know, she has a similarly large (if not larger) brother complex. 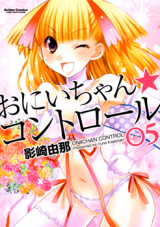 Ending:
Spoiler (mouse over to view)
Morals wins over love. They love each other but just like most of incest genre, doing it is wrong blabla bla bla so they do not it.
Was this comment useful?  Yes

However, just like others have mentioned... The lack of actual s*x and "crossing the line" is supremely disappointing. There's SO DAMN MUCH TEASING and nudity/ecchi scenes, but there's no actual crossing the line, just do it you impotent fck. Ravage her like there's no tomorrow, every day, she's begging for it. I know I would in that situation, there ain't no way I would be able to keep my hands off her with such splendid cockteasing and blatant shows of romantic affection. At least go for the "they had s*x" ending where we get to see that YES, they crossed the line. I get that we can't have them in a relationship in the name of comedy or whatever since the entire setting is about their dubious relationship, but at least give the readers the satisfaction of knowing what happened later on. The ending even seems to imply that they never actually got it on and just lived together for the rest of their lives or something like that, though that's just a guess based on the words/joke at the end. Quite sad that it couldn't have at least ended with them being affectionate and a mindset that said "screw the laws, we can't get married but we sure as hell can be together like a couple", since it's a manga and all. I don't know what the author wanted to do with this if it their relationship was going to get more distant/platonic at the very end.

Ending...
by theLettuceGarden04
September 3rd, 2016, 1:19am
Rating: 9.0  / 10.0
I love this series! As an incest fan, I would read pretty much anything related to bro-sis romances. Well this ain't a romance, but entertaining nevertheless. The male lead is urgh, he's such a wimp. If I was him, I would screw her til dawn, gosh. The ending...

Spoiler (mouse over to view)
Wish they screwed each other. Why didn't they :( stupid onii-chan. Why do mangas do this kind of ending? I hate ambiguous endings like this.


And oh, the masochist guys is hot~ Kinda wished Noa and him got together instead, haha.
Was this comment useful?  Yes

Cute!
by hotarusasaki
October 15th, 2014, 9:18pm
Rating: 7.0  / 10.0
My view on ecchi is rather low and I generally think of it as all about boobs and people acting vulgar but this is just so cute! The younger sister is just adorable and I love how she keeps giving her all to try hook in the one she loves. The older brother is quite adorable in his shyness too! I just simply love all the characters and it's just so hilarious and fun to read. It's such a cute light read.
Was this comment useful?  Yes

Strange enjoyment
by Rajiaffiance
July 25th, 2013, 5:19am
Rating: N/A
Oniichan control is actually very enjoyable on a strange level, we got two yandere characters, a unbearable weak MC who need to fuck his sister already, solid story, a nice plot, comedy is thrown and at the right moments, so yea I change my judgement.

I hope the stalker hooks up with his sister (the teacher). They're both perverts and perfect for each other (and the theme of this story). But more in a "I can shock more ppl than you can" kind of way (like the ending in 'Art of Seduction').

Otherwise, I like the story; Noa is awesome (I only wish I had her shamelessness and resourcefulness) and I wish she'd like the teacher's cute brother (although he is messed up, so is everyone else in this manga).

On another note, I'd like to see heroines like Noa in shoujo manga. Usually, in shoujo manga where they deal with forbidden love, 80% is just the heroine wangsting about their love for the teacher/brother/whoever and passively accepting that nothing is going to change. Noa actually DOES something about it. She makes a boring story interesting because she doesn't just accept other people's opinions when forced upon her and decides for herself.

People who have an issue with the story when the title CLEARLY tells you what it's about: Either don't read or accept that this is FICTION and have fun with it.

Meh
by Verix
March 12th, 2012, 8:06am
Rating: 6.0  / 10.0
The thing with manga like this is that they're never really going anywhere. It's always more of the same. It's fun for a little while but it gets dull and you get bored really fast. Can't recommend.
Was this comment useful?  Yes

Guilty Pleasure
by Seijurou
December 11th, 2011, 11:21pm
Rating: N/A
A funny, sexy, mature read that is well worth it. The artwork is pretty good as well. Read on to find out something surprising about the imouto (little sister) . . .

Fans of Ayu Mayu, Hatsukoi Limited., Aki-Sora, and A Wish of My Onee-Chan should not be disappointed.

I couldn't take it.
by Leos Klein
October 4th, 2011, 7:02am
Rating: N/A
Absolute degeneracy at its finest. The brother is a true pervert who can only get it up for his sister yet runs around trying to act otherwise hoping the sister doesn't find out.
While the sister who already knows this is basically the same but she is psychotic and would even go as far as trying to cut someone if they try to make a move on her brother. I don't even have to mention she is a stalker to the extreme.

Basically the whole story is the brother chastising himself and trying to act as if he doesn't want to bone his sister while the sister wants him to but she won't make the first move as she takes pleasure in making him fall in to degeneracy.
Was this comment useful?  Yes