Login to add items to your list, keep track of your progress, and rate series!
Description
Maico is a charming young woman who also happens to be an android. Her creator built her to revitalize the flagging ratings for her radio station, as well as to probe the intricacies and weaknesses of the male libido. Maico quickly becomes entangled in a very human love triangle, not to mention the scandal and intrigue surrounding the station, its competitors, and the hordes of adoring fans that this sexy new personality attracts. 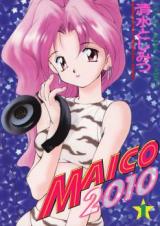 Mixed feelings
by nightshade31
April 29th, 2012, 6:15am
Rating: 6.0  / 10.0
It's an enjoyable read if you don't take this manga too seriously. Sometimes it feels like the story progressed on it's own without bothering to explain to the readers what happened. e.g. It felt like there was one missing chapter between the end of volume 2 and the beginning of volume 3.

As for the romance development it feels kinda weird,
Spoiler (mouse over to view)
Maico slapped Matsuo for kissing Masudamasu, but she forgave Matsuo pretending to be Akai's girlfriend without actually knowing that they were pretending to be a couple (maybe spying them for the whole day made her figured that out but it was never implied in the manga). Also Matsuo barely appeared in the last chapter, which makes you wonder what was that all about.

What happened in the the ending was kinda expected for me because of what was mentioned earlier midway in the series. It's not like it is a sad ending, but it's kinda like a disappointing open ended type of ending.

As for some other quirks I noticed in the series,
Spoiler (mouse over to view)
The antagonist -whatever his name was, was devastated when some guy committed suicide due to the accident in the studio, but he seems to have no trouble getting innocent people involved in his revenge, maybe the trauma had broke him and he no longer consider human life as something valuable.

It's weird that only the antagonist knows about the machine breaking down that lead to the suicide incident, the people in the studio would have known about it as well. And being the inventor Masudamasu would have been informed about it as well. Unless in his mad rage the antagonist killed everyone in the studio before going after Masudamasu and her sister.

The main problem that can lead to the disaster is actually the bug in the OS that causes the hardware to malfunction. So it's not just Maico but all hardware with the OS can cause the disaster. Yet knowing that, the antagonist is obsessed to kill Maico to solve the problem.
Was this comment useful?  Yes

That end...
by brunoais
July 15th, 2010, 12:10pm
Rating: 9.0  / 10.0
Something's not right with the end. It seems like there's a need for, at least, one more chapter, something that shows what happened after
Spoiler (highlight to view)
she goes to the network.
The rest of the manga is well made with a good story ad good quality ecchi. Like comedy? Like ecchi? If you answered Yes to both than this manga is for you!
Was this comment useful?  Yes