Kanade has an exceptionally acute sense of smell which allows him to detect even the faintest aromas in the air around him. Together with his French cousin Anais, he follows those scents all the way to the heart of the deepest and darkest mysteries.

Latest Release(s)
c.1 by Sakura-Crisis over 14 years ago
Search for all releases of this series 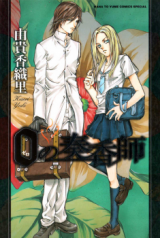 All that perfume would make me sick.
by jojalee
August 20th, 2017, 6:37am
Rating: 7.0  / 10.0
It's a shame she never wrapped this one up properly but I suppose Yuki-sensei had plenty of other stories to work on. Pretty cool concept, Kaori Yuki always has interesting stories that are very reminiscent of old Fairy Tales.
Was this comment useful?  Yes

This story had enormous potential to be a great series - I mean, it's about a gifted perfumist with a nose like a dog and his tough female cousin solving murder mysteries! It doesn't get much better than that. Like the mangaka's other works, this had a fascinatingly dark atmosphere and the potential romance was promising, too (Kanade and Anais are not blood-related, so it has the added bonus of avoiding fauxcest angst). On top of that, Kanade and Anais are complex characters and I could easily envision reading a good long series where we'd get to know their pasts and relationship better.

Sadly, the real letdown here is the length. Considering its three chapters were episodic in nature, I didn't expect to get an ending that's tied in a bow, but it quite simply... ends. The hints of possible romance never bore fruit, either. It's really a shame. Still worth a read (it's really quite an interesting story), but don't expect 100% satisfaction.
Was this comment useful?  Yes

-.-'
by annstefani
June 11th, 2012, 2:22am
Rating: 7.0  / 10.0
I read this a long time ago and was waiting for the next chapter to come out, I just found out it was only 3 chapters long -sigh- I agree with everyone that it would've been great if it was longer. The story has potential for more and was interesting, I especially loved learning about the things that was weaved into the story of the manga like the Proust phenomenon/effect and olfactory paralysis etc. the author did her homework for which I'm grateful. I wanted to know more about the two MCs and see them fleshed out more. A little bit more romance wouldn't hurt either, but it could do without as well. The mystery was enough to keep my interest till the end and made me want more. Although the flow from chapter to chapter felt a bit episodic to me (like a compilation of one-shots), I still enjoyed it.

tres original....
by wpf
November 15th, 2011, 2:14am
Rating: N/A
For the first time, I didn't mind there not being any romance - the plot is THAT original and creative to keep me hooked!
The artwork is amazing - that's Yuki Kaori for you, despite the occasional disproportionate head/body issue, however, overall, brilliant.
Pity it's only 1 volume - there was so much more to work with. I highly recommend for anyone who's just read one too many of the same, predictable mysteries.

.
It really isn't a manga like others. Why not a full 10/10 : like everybody says, it could have been more developed, it's such a waist :s.
Was this comment useful?  Yes

Aw, no more?
by sandyatthebeach1
November 29th, 2010, 4:27pm
Rating: N/A
So much potential! A very interesting plot, and really beautiful art. Sort of dark, too, which is cool. I wish this could have continued, it would've been awesome! And a little romance wouldn't hurt, either.

Great Story...
by astroasis
August 31st, 2010, 6:52pm
Rating: 8.0  / 10.0
I'd also like to see more of this series. Shame it's only the one volume! The artwork is great, the concept is original, the characters are likable... There's nothing here NOT to like. I think in the third chapter, the series was really starting to shine. What a shame that was the last chapter! I wish this had been made into a longer series. I also would've loved to see a romantic sub-plot thrown in there

so short =[
by emmirose
June 18th, 2010, 3:58am
Rating: 8.0  / 10.0
In summary, it reminded me of Godchild: mysterious and dark... just less morbid (^^;; still love it) and with a more original element: perfume. It seems to be an odd choice to make, but she spun a beautiful tale by using our sense of smell to further engage readers.

I agree with Trussardi; this series would have been more captivating as a longer story. I would have loved to see more of the main characters' lives and relationships. However, each short story had something unique and clever added. Like perfume, one element is uncovered after the first element, and a new one comes out after the second. =P Each layer depends on the other layers, and I love that about the mangaka's work. She created so much depth in each story this way, despite the fact that every one was so brief.

If nothing else, Kaori Yuki's artwork is so beautiful! ^-^
Was this comment useful?  Yes

arg
by zombiefetishlove
January 10th, 2010, 2:40pm
Rating: N/A
where did the romance go?! i was looking forward to the guy and his cousin, they would have made a great couple! darn, but this is an enjoyable read. 7/10
Was this comment useful?  Yes