Login to add items to your list, keep track of your progress, and rate series!
Description
Read some slice of Asuka-chan's normal life. And see how interesting some daily activites of a cute high schooler girl can be. 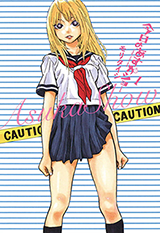 Note: You must be logged in to update information on this page.
Forum Posts Click to view the forum
Kyou no Asuka Show to End in 3 Chapters
over 8 years ago

If you're feeling down, this will do the trick
by aroptua
March 5th, 2017, 12:51pm
Rating: 8.0  / 10.0
One of the more uplifting manga out there. The ecchi is undeniably there but it's done in a way that's relevant to the story which doesn't revolve around eroticism as much as you'd expect.
I wouldn't go so far as to call it deep but there are certainly some messages in there but the most prevailing one would be to keep your chin up, be hopeful for the coming day and do your best.
Was this comment useful?  Yes

a cute, and a bit sexy, manga.
Was this comment useful?  Yes

Today's Asuka Show is a very cute manga.
The art is nice.
And it seems as though the mangaka is trying hard to come up with interesting situations for the ecchi. And it's working, if I may say so myself.
Asuka is very cute- being the center of the manga.
The situations she gets into are silly, but nontheless, she makes them adorable.

The storyline is just that- the situations Asuka gets into.
If you're looking for your everyday super-duper girl falls for guy sort of thing, it's the wrong manga.

Asuka might give off a dumb impression at first and through out, but in the end, she's a hardworking and positive girl who happens to have a nice, ecchi figure

Another seemingly prominent character besides Asuka, is Asuka's father. A caring father with a cynical bone?
So far, he's likeable. ^^

I'm very sad it's over... I really enjoyed following Asuka-chan in her daily life.
She's such an honest, caring girl who tended to get into ecchi situtations. It was great.
The ecchi isn't over the top (at least for me) and the combination of ecchi and cute was perfect.

I would've loved to see it continue, but alas, all good things come to an end.
The final chapter wrapped things up nicely, especially for an episodic manga. We got no conclusion at all, because there cannot be one, but it was a nice closure to the series.