Login to add items to your list, keep track of your progress, and rate series!
Description
In the casual days of the spring of his third year in middle school, Mitsuru Hibino meets transfer student Kouzou Issha, who develops his special power. Issha commands Hibino to use his lethal “power” to “correct the errors of this world”.
Their first step is to “kill those who drive while using their cell phones”. While getting their hands dirty with what society considers “crime”, these boys use their “power” for their “ideal justice”. 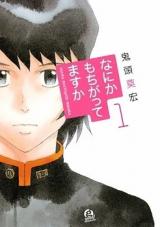 Note: You must be logged in to update information on this page.
Forum Posts Click to view the forum
Nanika Mochigatte Masuka to End
over 7 years ago

good ride but disappointing destination
by whitespade
June 4th, 2017, 12:08am
Rating: 8.7  / 10.0
first thing, the art is wispy and the kids look pretty similar to each other. however its not too hard since they call each other names every other sentence.

second, don't expect much in the end, it is quite underwhelming and dissatisfying.

However, I do like the weak willed mc and the sociopathic second mc, and the shenanigans they go through but some may really hate the weakness just so you know. also the conversations about morality and life are interesting, and appropriately full of angst and edginess of someone in puberty. nothing profound, just the thinking of someone who only have a hammer thus see everything as nails, but that's the level you expect from kids and internet commenters thus you don't feel its ridiculous.

Disappointing
by yamaken-dono
June 24th, 2013, 8:31am
Rating: 1.0  / 10.0
This is the fourth work of Kitoh that I've read (fifth if you count Zansho), and it's by far the most uninspired. I think he's lost touch with how to write tragic and psychopathic characters, or maybe rehashing it for the nth time takes away authenticity.

I find the ease with which Hibino can murder a stranger disgusting and unconvincing. It was lazy and lacked depth and sensitivity and a complete betrayal of everything Bokurano did right. As if being passive and led around by Issha or Issha's flimsy and bogus justification excused anything.

It's like a Death Note wannabe except Death Note was never about morality and never expected us to sympathize with Light. And Kira never killed people who "drive while using their phones."
Was this comment useful?  Yes

The ESP aspect plus Issha's seemingly twisted goals have got me hooked. Mitsuru and Issha's interactions are intriguing--the seriousness of what they're trying to do, Mitsuru and Issha's mentality, and the occasional glimmer of how normal or human they are.

I'm going to stalk some of Kitoh Mohiro's other works while I wait for more chapter updates.

Moral ambiguity is Kitoh's specialty
by pichuloo
March 17th, 2011, 1:49pm
Rating: 10.0  / 10.0
While the first chapter was more of a character introduction, you will be definitely captivated by the end of chapter 2, where the moral dilemma of the main character will start to unfold.

The plot is very straight-forward, the main character Hibino is commanded by the mysterious transfer student to use his ESP powers in order to make the world a better place, by getting rid of the useless ones in society.

I'm a big fan of Kitoh Mohiro and as far as this new series is concerned, this one deserves a 10 for now, since he definitely knows how to write stimulating stories with a powerful premise.