Login to add items to your list, keep track of your progress, and rate series!
Description
From Phantom Scans

Kyoichi's elite high school and the delinquent school next door are separated by only a fence. One day by the fence, Kyoichi meets Chiba, a fearsome student known for speaking with his fists......a school story of star-crossed lovers. 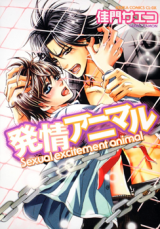 My reaction
by Himeowchama
April 9th, 2017, 2:49am
Rating: 1.0  / 10.0
Was like
→ when they shared meals together
↓when seme tried to rape uke
↑when seme stopped bc uke was afraid
↓when they tried to have sex between a fence

Yep yep the story made sense
Was this comment useful?  Yes

PS: Did you figure out all 3 warnings mean the same thing? You're too smart, just skip this series.
Was this comment useful?  Yes

So uncomfortable it's funny
by Nyokichan
February 3rd, 2015, 12:48pm
Rating: 7.0  / 10.0
Dude go around the fence!! Is what I kept thinking the whole time. And I understand why the student council was freaking out. There are students having sex on the lawn where clearly everyone from both schools can see. Also can you imagine being at school and accidentally leaning on that fence? So unsanitary! But it was still sort of cute and funny so I'll give it some stars.
Was this comment useful?  Yes

Still laughing
by Pari
June 17th, 2014, 3:17pm
Rating: N/A
Kinky-chan.. I distinctly remember my friends at school talking about an episode of BIG BROTHER where two people had sex through a fence. I watched an episode then, and yes, indeed, it is entirely possible. People are weird.

This manga was super weird, too. I don't get how the protagonists didn't think about just meeting outside of school. Or not having public sex while others looked at them from inside the school building.. Or.. I don't even know where to start.
Was this comment useful?  Yes

My gawd...why?
by Kinky-Chan
February 6th, 2014, 6:30am
Rating: 8.0  / 10.0
Okay, so I don't think so logical explanation might be needed when you read this. I mean, how can someone tear down a fence with their bare hands?! Then there's this sex between the fence. So I take it that as long as the hole is bigger than their lower part, it is possible to have sex between the fences. It's kinda funny when you think about it. And don't they know that there's this thing known as "meeting outside of the school"? Then again, common sense doesn't apply in this manga. Okay. I get it.

Well...I won't say it's a very nice story, it's just...funny in a way. It's not like reading Royal Prince, where it's much more classy and darker. Even so, you might as well just enjoy this retarded manga.

I had a great fun
by Lilyanna08
October 22nd, 2013, 3:43pm
Rating: N/A
My advice : if you want to read ready yourself for:
1. a yaoi version of "beauty and the beast"
2. set in dimension where fence-sex is totally possible
3. metal fences can be ripped with bare hands
4. the moment when words like: " that's why we can only meet at this fence" are said, you have to stop, go back one page, read again then start laughing
5. even in this dimension for a fence-sex to be possible the uke has to seriously stick out his lover half however more than 50% of his words during that times are: "no" or "don't"
6. I'm pretty certain that in this dimension beds do not exist

Summing up to enjoy this one you have to take it as a parody xD
Was this comment useful?  Yes

Um?
by varianthart
July 25th, 2013, 11:55pm
Rating: 3.0  / 10.0
This is entirely brainless. The characters are very one-dimensional. The story is cliche and boring. It is really just smut, but it's not even doing that well. The whole premise is ridiculous from the start. They're not in prison, they're in high school. If they want to see each other, they could speak a few words and meet after school. That is not exactly a heart wrenching situation, even if the characters weren't too unrealistic and flat to be relatable.
Was this comment useful?  Yes

Love It
by angeline80
May 28th, 2010, 5:43am
Rating: 10.0  / 10.0
I really love this manga. The feeling, the emotion is so great. It make me sad at beginning because they cant be together but at last its really great to see them happiness. Its a great manga.
Was this comment useful?  Yes