Login to add items to your list, keep track of your progress, and rate series!
Description
The story revolves around Takumi Tsuzuki, a boy who lives with his older "sister" Otome, although the two have no blood ties between them. Otome manages a run-down confectionery store called Stray Cats. One day, Otome picks up a mysterious beautiful girl off the streets. 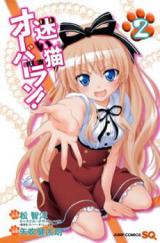 as expected from Yabuki-sensei's moe
by MitratamaOSIS
September 13th, 2010, 9:51pm
Rating: 10.0  / 10.0
It's a good romance, harem, ecchi series. the random plot can be read light-hearted. It's good for those who's seeking for some light reading to flee from daily stress. I'm one of them, so it's perfect. the combination of ecchi harem with Yabuki-sensei is the best. It's not good if you are reading this while you're seeking a manga with more plot and action though.
Was this comment useful?  Yes

Another To-Love-Ru
by SomePerson
August 15th, 2010, 9:13pm
Rating: 4.0  / 10.0
That's really all it is. I've read through two volumes already and every chapter feels like it's a filler. I don't see any specific direction that the "plot" is heading to (if there even is any). Every chapter is just the everyday shenanigans that the club does. It's also riddled with endless cliches as well.

A good thing to read if you're bored, but if you're actually looking for something with quality, don't look here.
Was this comment useful?  Yes

Generic and uninspired...but not as bad as the anime
by Kevadu
May 13th, 2010, 12:10pm
Rating: 4.0  / 10.0
The problem with this manga is that all of the characters are completley unispired stereotypes. You have a tsundere childhood friend, a spoiled rich girl, and a quiet mysterious girl. Yeah, never seen that before...

Of course sometimes you can have stereotypical characters at the beginning who grow and develop in interesting ways...but I haven't seen a hint of that here. True it's still early in the series, but the characters are so deeply entrenched in their respective stereotypes I don't even see *how* they could develop. Unenomori has got to be one of the most irritating characters I have ever encountered in manga, and that's saying at lot. The author has taking the spoiled rich girl archetype to such an absurd extreme that the end result is neither believable nor likeable. Fumino isn't much better as the violent tsundere and her constant 'die twice' nonsense. Nozomi is at least inoffensive, but that's because she barely even has a personality. I can hardly believe this is based on a *novel*. The writing just bad, all it has going for it is some fan service.

Still, for all of its flaws the manga version is still a lot better than the anime, which is just plain terrible.
Was this comment useful?  Yes

entertaining
by intemango
March 29th, 2010, 2:52am
Rating: N/A
Yep. This new series doesn't give me as many bad vibes as TLR, partly because the setting seems less stupid (which makes the protagonist seem less pathetic), and because the characters possess a little bit more common sense (though still predictable). The first 3 chapters introduce you to the main heroines and, to put bluntly, feel quite rushed (each girl a chapter and all). I don't know when the main plot will wear out and this will degenerate into tripping and groping every 3 panels like TLR, and am certainly not looking forward to that. Though the plot right now is not exactly what I'd call original either.

That said, it's still entertaining and this is one of the artists I'm most fond of. Like Bakuman (from his mentor), the series has great artwork. It's definitely too bad that he's still doing ecchi series. Nothing wrong with a good ecchi, but at the same time he could be working on another masterpiece instead, and preferably not a generic run-of-the-mill shounen.
Was this comment useful?  Yes

A Best Selling Novel into a Manga also ....ANIME!!
by crazyjap22
January 7th, 2010, 5:36pm
Rating: 10.0  / 10.0
I haven't read the novel but according to blogs I read on Japanese websites it looks like it's a really popular novel and because it was so popular they made it into a manga and not only a manga but a manga drawn by Yabuki Kentaro-sensei (Favorite Mangaka XD). Like the last two post before me the reason why it's in the same world as To Love-ru is because Yabuki-sensei is drawing it for the author, Tomohiro Matsu-sensei so they were like To Love-ru was ecchi too plus its finished and Yabuki-sensei needs something to work on and obviously he accepted it so why not bring in some characters in for thanks (That's my thoughts though XP). At least we get to see some familiar faces in a new story and maybe the author might change up the story just to give the To Love-ru characters a main role (That would be great!) I hope to see Kotegawa Yui in the story (Favorite Character XP) Not only is it a novel and a manga it's also going to become an anime series. That's something to look forward too!

after to love ru, we get this manga!
by Trejon
January 5th, 2010, 12:14am
Rating: 10.0  / 10.0
wow, this manga its in the same universe as to love ru, we might even expect some character development in to love ru as a side filler in a corner of the page or something, like rito having a double date with haruna and lala, im really expecting a lot from this series, hope it dosnt have to much fillers like to love ru did.
as for the story, its something new that i havent readed in others mangas... good work!
cant wait for next chapter!
Was this comment useful?  Yes

same mangaka (To-LOVE-Ru)
by aznluck
January 1st, 2010, 12:44am
Rating: N/A
i would like to say from reading the 1st chapter that it in the same town as "To-LOVE-Ru Trouble" universe but different story. i read some of his (mangaka: YABUKI Kentaro) other works (manga) so i expect great future chapter