Takamura Uru takes her mother’s remarriage as an opportunity to strike out on her own and begin a part time job. Filled with the thought of “If only I could make someone happy…”, she begins working at Café Bohneur, a shop famous for cakes; but the employees, Ichirou-kun and Shindou-san, turn out to be incredibly unsociable. These two, though frightening at first glance, begin to change something inside of her. This is the start of a romance about Uru’s search for happiness. 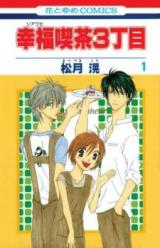 Mindless entertainment, not much excitement
by MermaidAiera
October 27th, 2019, 12:37pm
Rating: 6.0  / 10.0
I didn't dislike this manga, but if you're looking for something exciting then this isn't it. It's very much a slice of life comedy that centers around a repeating formula of jokes, and the plot takes a solid 60 chapters to appear. The opportunities for plot/character development are shot down immediately in the earlier chapters, making it feel redundant to read after a while. The plot/drama is interesting enough when it finally comes into play, but it feels like it should have come in a lot earlier to offer more development of the end of the story which felt a bit lazy/rushed.

That said, there are definitely a lot of things that are praiseworthy about this manga. I don't find it overrated despite disagreeing with the high ratings from a personal perspective. The artwork improves significantly as you read on which was really enjoyable to see. The characters are also well developed in their personalities/backstories, which makes them more memorable and likable. I think the high ratings for this manga are for that reason; It's definitely a nice read to relax to and get a good laugh out of. With a calming setting and feel good atmosphere before the plot comes in, it's very lighthearted and holds a lot of promise.

Tl;dr - If you're looking for something to take you away from reality for a while and make you feel good, this will serve as the perfect distraction. If you're here for some juicy drama/excitement, you'll probably drop it before you make it to any of the plot, which is a bit underwhelming and takes ages to come into play.

Really funny especially with the Gags.
by Mafino
August 2nd, 2016, 3:26am
Rating: N/A
I have read this manga once again and again. The gags never get old. Especially with Takamura Uru's denseness. It's so funny to see her being called 'She's my daughter' by many middle-aged men to claim her for their son(?). I especially love protagonist's younger cousin.

In order to enjoy the manga without boredom; you have to focus on each panel. Concentrate, and imagine it happening around you. Now my mouth is filled with a laughing bomb.

It's funny protagonist tripped into the center of a love polygon, too. I feel bad for Nishikawa Ichirou at the end though as this is why I hate reverse harem manga sometimes. This needs a sequel.
Was this comment useful?  Yes

Start good
by kiriee
April 23rd, 2016, 5:13am
Rating: 8.0  / 10.0
It start with good story and character but after volume 8 or so it became kind of mehh, it is not bad it just drag too long with the author introducing too many character that actually not used too much. Also after awhile the author keep hinting bad thing and introducing new antagonist but it was done really badly, because how it resolve so quickly, it make the whole thing looks lame and not as big as the author want it to looks.

I also doesn't like the slow romance at all it's feel so forced it is sooo slow and suddenly going at full speed and then suddenly poof its over. Honestly if you want slow romance I would recommend Taiyou no Ie, this one done really badly, but regardless it is still fun manga to read.
Was this comment useful?  Yes

I absolutely had a wonderful read in the start
by tipz
June 25th, 2014, 3:44am
Rating: 5.0  / 10.0
I was totally into it.. But as it dragged on I found myself spread reading to get it over with.. Was expecting a better ending.
Spoiler (mouse over to view)
there was a nice build up.. From when the girl left home and found a good job with two guys... And her being so unladylike asked for good potential.. Then she started meeting others.. Got to know everyone better and fit in well.. But the love rival to the guy she worked with was her cousin first??? Very not cool in my books and just gross&#128552;. I felt it took way way too long for their love to be realized and although I thought the way the guy loves the cafe and baking was sexy.. I think here could have been a lot more for him to then what he was placed at.. I expected even a nice kiss in the end which was a bummer it didn't happen..

Actually loved the artistry of the characters

Good setup but got boring very quickly
by jeffreymgibson
March 25th, 2014, 8:50pm
Rating: N/A
I dropped it after a while because it was too much repetition, and the actual romantic content was almost non existent. I think this titled was probably aimed at younger girls (12-13) and for someone a little older like myself, this title just doesn't cut it.

That's the bad thing about shoujo, you can't really go by the description or the series tags. You never know what your getting or for what age group until you start reading the story.
Was this comment useful?  Yes

CLICHE
by drifting
July 24th, 2013, 3:03pm
Rating: 7.0  / 10.0
A simple, sweet manga if you're looking for a nice cliche where everyone falls in love with the protagonist and everyone has one or two interesting character quirks to spice things up. It's like every other manga out there, but there's technically nothing wrong with it (besides everything being overdone) so I couldn't give it a score lower than a 7. The characters are likable...2D but likable. I got to the 7th volume before I gave up, so it is worth a look. Don't force yourself to finish it though.

Cute.
by flowinmyboat
November 18th, 2012, 7:35pm
Rating: 6.0  / 10.0
It's cute but it wasn't my cup of tea though. I thought it was unnecessarily long and the plot went way off from where it started. That is to say, some of the stuff that happened later kinda came out of nowhere to me. The "plot" appeared too late (I would seriously say the main conflict starts at chap. 51) for my liking and the ending left more questions than it answered. Also, most conflicts were so predictable and episodic, I had to skip them.

This manga would have been a lot better as a simple comedic love-polygon type story.

Cute, but way too long
by Saons
September 2nd, 2012, 1:16pm
Rating: 7.0  / 10.0
Picked this up a long time ago and only just finished it (though I skipped quite a bit). It's comedic and adorable, your typical shoujo; but be warned it's undesirably lengthy and will likely bore you at times.
Was this comment useful?  Yes

YES.
by dreamit.
August 3rd, 2012, 11:12pm
Rating: 9.0  / 10.0
This manga was really good! It was light, cute but definitely not too fluffy or over-dramatic. The main characters aren't whiny or annoying at all, they were all very strong and independent. I especially love Uru. Despite her innocent smile, she is quite the strong character, she's not like other shoujo girls who rely on the guy to solve everything. She does things herself and she figures out ways to solve things without causing trouble to the people around her. It's a light heart-felt manga but it's definitely worth a read. You'll fall in love with all the characters and their character development.

One thing:
Spoiler (mouse over to view)
I wish there was more romance. I mean, it was cute and all but it was so slow and the ending wasn't satisfying enough for me. I woulda been happy if they kissed in the end when he comes back or something. AND OMG ICHIROU!! Ugh.. it's hard when the main character gets close to both guys and both guys care for her equally but she has to choose one but she doesn't choose the one who makes it the most clear how much he cares for her. and it's just heartbreaking...

Gets Boring
by MightyMaeve
June 5th, 2012, 9:47am
Rating: 4.0  / 10.0
Although repetive with very shallow conflicts that were all easily resoved each chapter, it was still sweet and likable for the first five volumes or so. I started to get bored even by that point, though, so when then scanlation quality for the volumes that were unfinished by TP went downhill fast, it wasn't worth the struggle to read it.
Was this comment useful?  Yes