Login to add items to your list, keep track of your progress, and rate series!
Description
This could be any girl. Imagine being a heroine of a love story. Hatori also believed that one day she would get married to her childhood friend, Rita.

But that's not how the world works! This is a hilarious comedy that honestly paints a painful unrequited love story of this young girl! 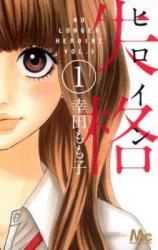 Note: You must be logged in to update information on this page.
Forum Posts Click to view the forum
This could turn out to be good & unique but only if
over 7 years ago
mmm so where is it going...
over 8 years ago

IDK what to say
by .Chi-chan
November 14th, 2018, 2:20am
Rating: 5.0  / 10.0
I do remember laughing so hard in this manga WAYYYY back 2014 while it was still updating, and I do remember shipping Hatori with Rita all throughout the story(even if she and Hiromitsu were already together) because idk, Hatori was so funny and I used to love male leads who regrets leaving the main heroine and chasing them in the end. I like those kind of dramas so just hearing that it ended the way I wanted it to,(I stopped at chapter 20 something when it was still updating) I was so happy. Now, 4 years later, I decided to pick this again and read the continuing chapters. Now I'm really seeing this story in a new direction, but in a more detestable road. I started falling for Hiromutsu even when I didn't want too, he was just! So! Perfect! And! Mature! And! Understanding! He's the perfect boyfriend everyone could ask for!!!!!!!! He realizes his flaws and mistakes AND HE MAKES UP FOR IT. HE WAS SOOOO UNDERSTANDING AND MATURE OMFG HATORI YOU DON'T DESERVE HIM! I was bawling my eyes out just a while ago because I was really mad when Hatori chose stupid, indecisive Rita in the end LIKE OKAY FINE. HIROMITSU IS MINE. I also like Hatori's friend. Urghhh!!! Hiromutsu and Nakajima are the only characters I like in this story now. i used to like this but now, idk what anymore.

Maybe this story is for everyone--in a couple of chapters. But will not on the final chapters.

annoying cast of characters
by xdeLiiRiOus
July 31st, 2018, 4:01pm
Rating: 1.0  / 10.0
This manga started out with so much potential. I absolutely loved the premise of it. But then Rita killed it. His character is so pathetically wishy-washy and annoying and indecisive and inconsiderate and selfish and etc. etc. I don't know what in the world makes Hatori attracted to him. Is it because he's her childhood friend? I could not, for the life of me, understand why she is so obsessed with him. I actually stuck it out for Hiromitsu.

Spoiler (mouse over to view)
But the author dealt him a losing hand. Actually I felt conned. I don't recall a single moment that made Rita a redeeming character. This author really lead you to believe that Hiromitsu was the one, up until the last few chapters where she magically decided she still liked Rita afterall. Ugh. Puke.

Hiromitsu is definitely the only good thing in this manga. I'm so annoyed.

I like it
by hirukayuki01
September 30th, 2017, 10:43am
Rating: 7.0  / 10.0
Seriously I'm one of the many people like the reviews who decided to stop reading it, but not exactly because I didn't. Well yeah maybe I was kind of disappointed because the ending wasn't the ending I was wishing for. What could possibly happen with just a few chapters relating right?? But some really did happen! Anyway, I suggest to just pull through from the middle and try to finish it. You might like it ^^
Was this comment useful?  Yes

Ugh...
by wallyakazukin
July 12th, 2015, 6:51pm
Rating: 5.0  / 10.0
The premise is good. The idea alone of rival heroine easily capture my attention. But what happen after , like 10 chapters? It turned out very, I said, very badly. Both Hatori and Rita (the main charas) are so annoying. They keep swaying and swaying, especially Hatori. I stay just because Hiromitsu and Nakajima (they're side chars, yet best chars in this manga, I think). I stopped at chapter 23. Can't stand Hatori's stupidity ><
Was this comment useful?  Yes

started out so well....what happened?
by moonmystery
April 25th, 2015, 11:33pm
Rating: 5.0  / 10.0
Ugh...
Started out well... and then everything went downhill. The main girl is absolutely relatable and hilarious, but the main male lead just made everything uncomfortable for me. His indecisive manner and actions just pointed to his immaturity--i could not sympathize.

Spoiler (mouse over to view)
I fell in love with the storyline before the girl went all obsessive over the guy despite having a cool guy nearby. She was funny, but eventually she turned too desperate...

And why would she end up with Rita ??? ? That's so stupid. Rita seemed genuinely in love with Adachi up to a certain point of the manga. I understand that Rita's not perfect and stuff, but still..... I just UGH.

Quite good but too long
by Maihnfnbn
December 14th, 2014, 8:40am
Rating: N/A
I think it would have been better if it were to be shorter, the last half of the manga was quite tiring seeing Hatori and Hiromitsu, though I really hoped they get together.
And it would be so nice if Rita and that supporting character (forgot her name OTL) got together, cause after all seeing them went through such a journey, they really did have some kind of chemistry
Was this comment useful?  Yes

It's good
by moeanao
December 1st, 2014, 5:58am
Rating: N/A
It was nice to see a shoujo manga from the rival/bitch's POV. That's why this manga is good.
However, it's not amazing. Also the fact that they had to throw in a love triangle made it worse.
But it's an incredibly fun read.

Spoiler (mouse over to view)
I'm one of those who wanted her to end up with Rita all along so I'm very satisfied with the ending. I liked Hiromitsu as a character the most out of the cast but I just couldn't feel the love between him and Hatori. It felt forced.
Was this comment useful?  Yes

While on the other hand, I really loved it AFTER giving it a second read.
Yes I hated it at first but then again I understood another message.

It's basically a failure of a girl and a boy. A Different kind of showing character development.
Hatori had always been obsessed with Rita, so in the end, choosing him is inevitable.
It was also good for Hiromitsu since being with Hatori will only lead to a VERY UNHEALTHY relationship.

Hatori amuses me. The author is brilliant for making a Heroine like Hatori. It shows obviousness on how detestable, bitch, and just, addictive a person can be.

Another is that, Koda Momoko reversed the roles. Hatori is supposed to be the typical rival/antagonist in a shoujo manga. Then she ended up with the Main hero which is Rita.
BUT, consider this..... at the very end, *Spoiler* :
Read Hatori's last statements....Everyone is a heroine of their own.

All in all, maybe it's just not for everyone.
Was this comment useful?  Yes

Seriously engaging and dastardly hilarious art
by ishitagupta
September 30th, 2014, 3:22pm
Rating: 9.0  / 10.0
Hahah this is so entertaining! This girl is equal parts delusional and downright scheming and so so so relatable! She's also very brave... I know I would have loved to be her had I no chance to be the "lead heroine" as she puts it! Her chain of consciousness is always trailing off into fantasies and almost immediately she'll pull herself back to reality too only to start fretting and scheming about another line of attack! I can never get enough of her inner monologue!

And the expressions and loveliness of the art despite some overall immaturity in the handling of faces is so top notch and over the top exaggerated! Sigh... this is why I continue to read shoujo manga! To encounter gems like this every now and then!

Everyone is so devious yet predictable, it's delicious! Characters are fleshed out very well here and lol "secondary characters" or "supporting characters" as our Heroine would call them are also given quite interesting non stereotypical roles. I may not be super happy with some of the more cliche twists the story kept taking after a while, or the ending per se... but it was a very fun ride.

And also... a self aware hottie basketball player who voluntarily attends prep/cram school? And knows when to turn on the jock fan service mode to distract the heroine from her ennui? SERVE ME UP A PIECE OF THAT!

And did I just see the three leads from Strobe Edge in a panel there?! OH MY GOD!!! Shoujo manga going meta! I love IT!!!

Hahah and generally I'm allergic to maudlin outbursts and melodrama but there's so much comedic relief to take the burden off it as well! How was this not made into an anime?!
Was this comment useful?  Yes