Login to add items to your list, keep track of your progress, and rate series!
Description
There is something a bit twisted inside of the teenage girl Madoka. It comes out one day when she has to deal with a groper on a public train. He may be scarred for life by the time she's finally through with him but for her, at least, this encounter may only be the beginning. 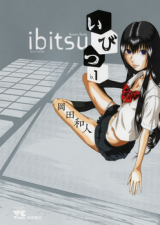 Note: You must be logged in to update information on this page.
Forum Posts Click to view the forum
Is this ever going to get completely scanlated?
over 7 years ago

very good
by Saintiemie
February 17th, 2021, 11:47pm
Rating: 10.0  / 10.0
One of the best manga I've read, Madoka and Kakiguchi's relationship is really unique, whenever I'm rereading this
Spoiler (mouse over to view)
I feel like I wanna cry, 'cause I'm remembering the ending

It was enjoyable BUT
by bakaweeb20k
January 16th, 2021, 6:58am
Rating: N/A
Spoiler (mouse over to view)
The plot throughout was one big build up, and the way they added in the horror that the doll was a voodoo doll in a way was a nice addition to spice it up. But, with the way that the relationship blossomed and they grew to trust each other and would always come back to each other no matter what gave me hope for a better ending than the one it had. Like so many other readers have said it seemed rushed, and unlike the character itself.
She was this close to seeing him again and then just blam character death.
A great way of ripping the reader's hearts out, but a huge let down for those truly invested in the story itself.
Was this comment useful?  Yes

This would have gotten a much higher (9.5+) score if

Spoiler (mouse over to view)
the ending wasn't such a lame lazy ass cop-out. Her death seemed inevitable but not snatched like that. It was just a pointless death of the main protagonist because of lazy ass writing. He just wanted her dead and had her killed in the most mundane (and cruel) way. Mind you, life can be like that.

In this instance had she survived and they both met it would have been a much better conclusion. I was rooting for them. I just wanted them to have a happy life together.

Someone should do a re-write of the ending.

This story will haunt me for quite some time.

Screwed up
by Kamugin
March 8th, 2018, 5:02pm
Rating: 7.0  / 10.0
Spoiler (mouse over to view)
An otherwise good manga ruined by a very very bad ending. I have read some manga and watched anime with bad endings but this one is particularly bad, a huge let down. The art is good, the pace is good, the characters are good, specially Madoka, but the ending is such a let down, like a kick in the balls when you are about to climax. I could give it a 9 out of 10, but because of the ending my final score is 7/10.

All's well that ends well
by Gandeloft
February 4th, 2018, 9:13pm
Rating: 9.0  / 10.0
I have read this a couple of months back.
I don't want to delve too much in to detail since it would require some time. I just want to say that how this story ended totally made me feel, undisputably so. I felt something strong, and the ending completely decided in the favor of the story. I was not even all that in to the story, like, 6/10, but the way it ended, made me bring its rating up to 9/10. At first, it was just based on the ending, the 9/10, but as it did make me think a lot more, I simply concluded that I was stupid for having intended to give it anything less. I think I should raise it to 10/10, but then that would be lying, since I failed to enjoy it as purely as that. I dislike ratings on manga and anime though, placing a strict value on art is invalid to begin with.
The initial 6/10, it is naturally based on nothing other than personal preference.
Most prominently, it was based on the fact that they had
Spoiler (mouse over to view)
never hugged each other.
That is very sad for me, and made me think not so well of the story because it seemed broken like that. But as I've said, the ending.. It made it obvious yet again how we humans are different. Just because the author didn't have the characters do the things I think that I would do if I had a deep affection with another, it doesn't mean that the author accidentally made for the feel of their relationship to be such. After all, I don't even know how it would go with me, I have only fantasy.

Tragic love comedy that could have been so nice, but in the end ...
by Dickegrobe
December 30th, 2017, 3:51am
Rating: N/A
To me, Ibitsu starts out as a love story of two broken souls ... and then the author fucks it all up. But first things first.

If you have read Sundome by the same author (and liked it), you'll most likely also read Ibitsu at some point and will find a lot of parallels or similarities.

The art is quite enjoyable. Apart from Kakeguchi (male lead), who is drawn in a comically simplified and distorted manner most of the time, this manga goes for a simple, but somewhat realistic style. While most of the faces consist of a few simple lines (strokes? whatever) when shown from a certain distance, there is exceptional attention to detail in closeups -- especially when it comes to Madoka's (female lead) body. There is so much detail and it's frickin realistic ... man, I wish they'd make hentai like that (not the wobbly giant tits bullshit and/or genitalia drawn by people who apparently don't know much about human physiology), but I digress. Anyway, art-wise this one looks pretty much like Sundome.

As for the story, well, that's another thing.

Both leads are brought together by some train groping incident. Madoka is groped by an unknown person in the train and Kakeguchi is (falsely?!*) accused.
Spoiler (mouse over to view)
* The way it is shown, you don't get to see who actually did it, but it looks pretty much as if it was someone else and Kakeguchi was just close when the train suddenly brakes ... and Madoka mistakenly catches him as perpetrator. Also, he is introduced as being way too feared of (real life) women and by no means bold enough to just try to finger bang a girl on the train. I'm not sure I remember everything right, but at some later time -- I think -- it is suggested that he might have been the one after all. That seemed inconsistent and left me a little confused. Figure it out yourself.
However, as Madoka -- through another ... erm ... incident -- gets an idea that Kakeguchi might be just as broken as her (or: kind of complementary to her), she takes an interest in him and forces herself into his home and life. And there starts our strong-female-lead-weak-male-lead super erotic love comedy. Now, if this was anything like Sundome, you'd expect some really heavy blows to the gut and heavy foreshadowing of tragic things to come -- you'll get both. There will be bonerising sex play (doesn't matter if you're not into the stuff that is shown -- it's still frickin hot!). There will be a villain, there will be ... other stuff. There will be danger. There will be laughter. There will be tragedy.

However, as both leads come closer to each other, you'll find yourself hoping that everything works out in the end. And it really could. The story would allow for a happy ending (after encountering quite a few obstacles).
Spoiler (mouse over to view)
After some heavily foreshadowed tragic climax, where the only school friend of Madoka -- who is/was in sexual relationship with the teacher that harasses and abuses Madoka (punch) -- turns batshit crazy out of jealousy (punch punch punch) and splashes acid into Madoka's face (at this point you were expecting something like that ... worse maybe), there is a clean way out of all this mess: Said friend and the teacher are taken into custody or something like that (the point is: the danger is averted). And everything COULD end in a nice way.

But here the author goes for another route: Time jump. Kakeguchi turned crazy, too, caring for a doll modelled after Madoka as if it was her (he's been a ... doll-guy all this time and made that doll when Madoka and him lived together). Madoka accidentally hears of some crazy doll-guy and knows it is him. She attempts to find him. So, for the sake of an even heavier punch, it is made very clear that whatever was between the two leads has become love and that they long for each other more than they could bear. On her way to find Kakeguchi, Madoka gets killed by some former class"mate"-turned-tramp. That's it. Fuck you very much!

While in Sundome the tragic ending had at least some meaning and led to a bitter sweet epiloque, here it seems pointless ... as if the author just wanted to fuck their audience, hard and not in a nice way.

Female Dom, male sub
by Jerberus
July 27th, 2017, 9:12pm
Rating: 5.0  / 10.0
If you're a Male Dom, then this isn't the manga for you.
If you're a Female Dom, or a male sub, then this might just be the manga for you.
The substitute teacher is one of the slimiest man that ever was.
AXED ENDING. Boom. Situation done. Finito. End.
Nana to Kaoru is more to my liking because NtK has a Male Dom/female sub and is a much happier manga.
P.S.: Xiximaro (user who posted the below comment) is referring to the last chapter.