Login to add items to your list, keep track of your progress, and rate series!
Description
Students are trained in the Infinite Stratos academy to pilot the weapon system IS (Infinite Stratos). Although it is believed that only females have the ability to operate the IS, there is one man who can. His name is Orimura Ichika. 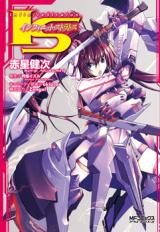 Note: You must be logged in to update information on this page.
Forum Posts Click to view the forum
IS romance
over 8 years ago
Infinite Stratos To End In September
over 10 years ago

Objetively speaking.
by Rhadaze
May 17th, 2013, 1:21pm
Rating: 7.0  / 10.0
-- ART: The Art was great. Sometimes inconsistent, but overall great.
Battle scenes were bad. It's like they tried to make it as intense as an anime and nothing was ever clear. I got to the point where I gave up on trying to figure out what I was seeing and just quickly eyed over the pages reading the dialogs until the battle stoped.

-- Setting: The setting was good. It reminded me a lot of freezing. The characters premisses were also great. They had very interesting and distinctive personalities, specially because they were from different countries and backgrounds, which helped enrih their special traits a lot. But... it only starts off well...

- Development: The development sucks. There's no building up to climaxes or any important situations. Setting and Character potential are lost in this mess. It's like when a little kid tries to tell a story but ends up saying every single thing too fast and forgets half the stuff they wanted to say to begin with.

For example, one of the girls would tell the character something important about their lives and I would think "Why are you even telling him that? You barely even know him", and I barely even knew them to begin with, which made me care much much less for whatever the hell they went through in their past.

I mean, in freezing, 40 episodes build enough expectation to make me REALLY pissed off about Satella's family when they bring the shit up.
Here, they condensed 125 episodes worth of story in only 25, it got rushed as hell.

When the side character DID know each other, it was because half the cast were childhood friends. Whaaat? This is the kind of forced situation created to explain whatever the mangaka needs to explain, which is only acceptable in oneshots, since the mangaka has only so many pages to draw interest.

Maybe they tried to do too much and ended up not doing anything? With all the premises thrown in the story, after reading it, I only remember the petty romance dramas.

Spoiler (mouse over to view)
He got kidnaped, so what?
She's a bastard child, so what?
Parents got divorced, so what?
Sister's attitude and shit broke family up, so what?
Got disowned by parents, so what?
Failed military experiment, so what?
legendary sister retires for mysterious reasons, so what?

Nothing ever got done with any of it.

Decent
by Caliburn
March 31st, 2013, 1:01am
Rating: 7.0  / 10.0
It's a good manga, though it's kinda hard to feel for the characters. The girls all have semi-dark pasts, but they don't seem affected. Heck,
Spoiler (mouse over to view)
Ichika was kidnapped as a kid
, but you don't see any trace of trauma on him! It's a good manga, though, if you can endure through the usual harem mish-mash.
Was this comment useful?  Yes

I did not get anything
by tehe-kun
July 23rd, 2012, 6:47pm
Rating: N/A
I did not get anything while reading this. Funny or exciting or sad. I do not get it all in the early chapters. Maybe I'll try to continue later, and hopefully just find something interesting.. .let's hope

Just read the Light Novels.
by Jandalman
June 19th, 2012, 8:07pm
Rating: 5.0  / 10.0
Or the anime. Both are far superior than this slow as manga. All the light novels released so far have been fully translated at Baka-Tsuki. The anime is pretty darn good too. This manga on the other hand takes forever to be released (by both publishers and scanlators, though I don't blame the scanlators as much.) The art style is slightly of somehow and the story is exactly the same as the anime and LN. So just use those two mediums rather than read this.
Was this comment useful?  Yes

SSDD
by Lightbrand
June 16th, 2012, 2:41pm
Rating: 7.0  / 10.0
Really for stories like this, I'm sure what's intersting for us readers is to find out what wacky ways will the author use to get a "typical nice guy" into a harem of beautiful ladies.

In Love Hina we have guy taking care of girl dorm.
In Sekirei we have guys fighting with female robots.
In To-love-ru we have guy attracting all the girls for the sole reason that he's nice.

Here we have guy enrolled to an all-girl school because he's like every other self-insert fantasy story, "special" that he gets to operate a suit that only girls can.

With that being the only "interesting" portion of the story gone. You can pretty much guess what the rest of the story will be about.
Was this comment useful?  Yes

Sounds like a hotbed for awesomeness right? In the grand scheme of things, its very awesome.

The problem is that the character are boring, cliche and flat. Other than referencing national foods and the occasional national rivalry quips, the multinational aspect of the characters are completely and utterly lost. Instead the girls fall back into typical anime tropes. The childhood friend. The ice queen. The rich girl. Etc.

That said, the art is pretty good, but can be a bit confusing once the mecha suits come on.

Good setting, lackluster characters
by fli136
July 28th, 2011, 1:31am
Rating: N/A
I like the sci-fi mecha stuff, which is very intriguing, but the characters are a bit cliched. I mean the entire cast consists of:
-Dense main character in a girls school
-Childhood friend who's a tomboy/tsundere
-2nd Childhood friend (I have to admit, this actually caught me by surprise) who enters with a cooking promise
-Tsundere drill hair class president
-and a pretty boy (Whom I suspect is actually a girl that also falls for the main character)
Basically, nothing I haven't seen before
Was this comment useful?  Yes

encourage creators of "infinite stratos"
by kamiro-sama06
March 24th, 2011, 9:20am
Rating: N/A
hello, at first the series is great, has everything and is fun, has a lot of potential to lift a second season, the plot so far is good
for me is just beginning, so there are some who speak for
not be so picky, you are not that
strive and work hard to make a good job
artistic, because the anime and manga is an art.
among all the series is very good I want to congratulate
Izuru YUMIZURU for their hard work, and Kenji AKABOSHI
if great job, congratulations to both and continue to
so please do not Parn the series in 12 episodes as I said
before has much potential.
well thanks for your attention and wish them well

PS: I like that the authors of
"infinite stratos" read this

mecha and harem soup
by meosnelsity
March 13th, 2011, 12:44pm
Rating: 7.5  / 10.0
human gundam? gundam human? Well... whatever this is... I think it's alright. Anime sounds better than manga, though. The setting itself is quiet interesting one, but harem polygon is mediocre... I recommend it if you want some refresh in your harem collection.

the greatest !!
by spmsmichelle
February 9th, 2011, 8:27pm
Rating: N/A
i love this anime 'cauz it really makes me feel excited

and i download every episode for this anime !!!
i really want to what will happen next

the greatest anime in this season