Login to add items to your list, keep track of your progress, and rate series!
Description
Fushimi Inari has a hopeless crush on her classmate Tanbabashi. One day, while trying to interact with him, she accidentally humiliates him in front of the whole class. He refuses to accept her apologies, and, to make matters worse, she discovers that he probably has a crush on their incredibly cute classmate Sumizome.

She has all these things in mind when she is summoned by Uka-no-Mitama-no-kami, a pale fox goddess. In return for rescuing a little fox-spirit creature before school that day, the goddess offers to grant a single wish of Inari's. Without thinking, she blurts out that she wants... More...
Fushimi Inari has a hopeless crush on her classmate Tanbabashi. One day, while trying to interact with him, she accidentally humiliates him in front of the whole class. He refuses to accept her apologies, and, to make matters worse, she discovers that he probably has a crush on their incredibly cute classmate Sumizome.

She has all these things in mind when she is summoned by Uka-no-Mitama-no-kami, a pale fox goddess. In return for rescuing a little fox-spirit creature before school that day, the goddess offers to grant a single wish of Inari's. Without thinking, she blurts out that she wants to be Sumizome. As one might expect, this wish does not go nearly as well as Inari had hoped, and the kindly goddess breaks a goddess-rule to give Inari the ability to change herself back. Now, Inari can change her own shape at will, and using her new skill is very tempting as she keeps trying to win Tanbabashi's heart. But if Inari flaunts her ability, both she and the goddess might end up in trouble with Amaterasu! Less... 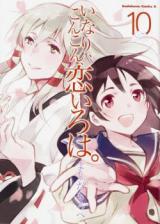 Review
by LiTCHT
November 20th, 2021, 12:55pm
Rating: 3.0  / 10.0
There are 2 types of characters, one is bad nd one is good. Characters in this manga are literally dumb. Their actions are so forced just for plot progression. There's no depth in them and act without any valid reason at the dumbest way possible. Plot's not bad but the bumb actions of rhe characters make it really bad.
Was this comment useful?  Yes

nice
by shanden123
July 25th, 2017, 1:10pm
Rating: N/A
this was really nice, i hesitated for years because i don't like girl protagonist, But this was different. I thought she would keep transforming just to get the guy but that was all wrong. the ending left me bittersweet.
Was this comment useful?  Yes

Very underrated
by sinxer
August 14th, 2016, 1:53am
Rating: 8.5  / 10.0
Very underrated, what starts out as a fairly cliche plot turns out not to be. I do love a manga with little to no loose ends and it left me with a bitter sweet after taste, I'd most definitely recommend this for everyone.
Was this comment useful?  Yes

Meh
by mandaras007
November 18th, 2015, 7:53am
Rating: N/A
Typical misunderstand between characters cause complicated relationship and unnecessary confusing shit. If you just take the misunderstand part out, this story would disappear. Also, there're lot of annoying side characters.

On the other hand, the both couples are cute, so if you you just read it for what it is, it could provide you some sweet time. Not recommend for those can't handle shoujo stuff though.

Sweet ending
by Charis
August 20th, 2015, 8:58am
Rating: 9.0  / 10.0
This is a good series. Wouldn't say the best but one of the nice series out there imo.
I only just returned to reading the series today when I realised it was complete, but based on my memory this series is nice and calm with just enough excitement in the story.
The author did a really great job of ending the series. It was sad and sweet and it didn't make me wish for an alternate ending plot. Really enjoyed it.
Spoiler (mouse over to view)
Although, I do wish for more side stories about the Inari's brother and Uka after the ending, and for the author to also include Uka's brother in them. It would make a really good side story to the ending. Fingers crossed.
Gave it 9/10 because its was one of the good series in my list but in the past I did get this series confused with Gingitsune. Foxes, gods, and girls with slightly similar powers.
If you're looking for a nice story with great character relationships, this is definitely one of the good ones.
Was this comment useful?  Yes

This is the man
by Lawlietlove
June 4th, 2015, 1:41am
Rating: 10.0  / 10.0
This manga series is seriously amazing, it has the cutest pairs, best art, just the right amount of fantasy, light-hearted comedy, and seriously sad parts which have made me cry over 20 times. I love it to the core and my only wish is for the whole series to be updated and scanalated so I can read it all to the end<3
Was this comment useful?  Yes

Surprisingly very very nice :)
by Padawan
May 29th, 2014, 9:21am
Rating: 10.0  / 10.0
Reading the summary, I totally misunderstood what the story was going to be about. I'm glad I tried the anime though, because this series is surprisingly very nice and charming

Pretty funny too, especially them gods acting all silly~
In a way its also a slice-of-life about Japanese Shinto gods lol.
Oh and it also has plenty amount of FEELS! lol. Which is actually quite nice and not the annoying type.

I only read the manga after I finished the anime though, and thank God I did because the manga is a WHOLE lot better than the anime (and the anime was already quite nice). Not to mention, the anime skips a LOT of stuff and changes much of what actually happened in the manga, like the locations and order of events. The anime was also way too short (10 episodes!) and ended way too early with what practically is a cliffhanger.

Highly recommended.
Inari is a sweet and adorable little girl, and Uka-sama is a lovely lady

Well Worth Reading
by powerdown
December 1st, 2013, 11:40am
Rating: 9.0  / 10.0
This manga relies on its characters than most stories rely on their plot and that's likely because every character here is special.

You will see characters be introduced, often as a hurdle to 'overcome' and later you and Inari realize that -- just maybe -- that the person you were both writing-off had feelings, too. Within this story you will read of sorcery and sociology, hopefully answering taboos that exist only to crush one's spirit. Is it taboo because you're in love, mustn't you correct the mistakes made in the name of love? What if they won't love me back?

Inari attempts to solve these questions by using other peoples answers, often gaining confidence through someone else in more ways than one. But the more she adopts another's facade she knows less of from whom that confidence is coming from.
Was this comment useful?  Yes

Lovely
by KendricO
May 4th, 2013, 3:11am
Rating: N/A
When I first saw the synopsis of this series, I thought "Oh great, another child-turned-super hero manga." But as I read each chapter, I became more and more immersed in the heartwarming little girl known as Inari. Each character stand out in their own way, although the story mainly focuses on Inari and Uka's problems. In fact, USING her power seems to create more problems than it solves...

Suffice to say, I find this manga a gem and an adorable read.
Was this comment useful?  Yes