Something is rotten in Okinawa...the floating stench of death hangs over the island..What is it? A strange, legged fish appears on the scene...so begins Tadashi and Kaori's spiral into the horror (and stench) of the sea.

*Includes two bonus stories called
• The Sad Tale of the Principal Post in vol 1.
• The Enigma of the Amigara Fault in vol 2. 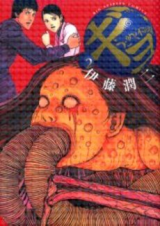 Note: You must be logged in to update information on this page.
Forum Posts Click to view the forum
Gyo Horror Manga Gets Anime
over 11 years ago

Entertaining and Fun
by falconmaster3000
May 19th, 2020, 8:26pm
Rating: 7.0  / 10.0
A fresh and unique story focusing mostly on body horror. The plot is lacking at times but the art is spectacular as usual and the body horror and dehumanization are done extremely well. Nothing is straight out scary or shocking, but there is a sense of unease and disgust. Often times the manga seems campy which makes it very endearing.

The truly scary and unsettling is the bonus story at the end. Junji Ito truly shines there, and it is honestly spectacularly horrifying. The ending is a punch in the stomach from human nature.
Was this comment useful?  Yes

UGHHHH!!
by Acradnxy
November 10th, 2019, 1:50am
Rating: N/A
As I already wrote in Junji Ito's Uzumaki, I'm not into body gore, but this one is full of it, yet I still read it because of my friend (the other friend who is Japanese said that it's really really good). And stupid me want to believe my friends ended up reading it.The first few chapters got me, I desperately wanted to know how this happened.

Spoiler (mouse over to view)
Ito-sensei gave us a case solved in here through the MC's uncle whose name I forgot (I forgot all of the characters name except Kaori): it because of the WW II, scientist wanted to make a deadly fart that can make the enemies died by smelling it, and those poor fishes were the victims of the experiment. HAHAHAHAHA!!! Hillarious. I mean it

Then after that here starts the body gore:
Spoiler (mouse over to view)
Kaori was turned into somekind of disastrous thing by her bf uncle like the cover above. Pipes through her anus and mouth. And I really did almost PUKE by this "creativity"
I skipped so many pages because of the body gore.

Though in manga I can't smell anything, but I think I can smell something smelly whenever I read this manga. Well done, Ito-sensei. You can make me smell something through your manga. Also, the ending is suck.

Painfully disturbing
by meniel
September 7th, 2017, 4:30am
Rating: 8.5  / 10.0
A very good horror read. Wonderfully drawn, oddly invented but above all perfectly paced. At first the scenery is just bizarre, but then the situation turns worrying, and then tragic, and eventually straight out apocalyptic. The story is always evolving, and when you think it can't get worse, it does. I'm not a fan of pseudo-science in manga because it tends to be pretty lame most of the time but it didn't sound bad in this one (especially considered that experiments on bad smells to use in war have been really made). There are some unrealistic elements that make the story look a bit fake, like

Spoiler (mouse over to view)
what did Tadashi's uncle do all the time? How was he able to afford a secretary? What happened to Tadashi's parents and why doesn't he care about them? What the heck had the circus
to do with, well, everything? Why was it even there in the first place?

but they are minor ones and not much relevant to the plot. Clearly the characters aren't the main focus of the manga and that's okay. They are given just as much characterization as they need but they do not drive the story, it's actually the fear and the mysteries that make you go on reading. Some of the mysteries are explained later while others, less practical and more existential, are not. That's okay too I think, the main questions are given an answer and for the others the reader can come up with their own interpretation.

GOOD READ and dat bonus chapter tho...
by villager_no2
March 20th, 2017, 12:38am
Rating: 9.5  / 10.0
the main story was good and all... but the bonus chapter tho, especially the second one, it was seriously terrifying in it's own way, the feeling of discomfort after reading that one is still haunt me to this day XD ...damn, the mangaka is a genius

This manga is extremely unique in the idea of being possessed...by robots. The concept (both in terms of artwork and details) is very different, but consistent...which is what I love the most. It really satisfy the horror genre and is pretty disturbing.

The plot is pretty good; people are genuinely afraid and are pretty terrified of what's going on around them. The ugliness of the expressions (of fear and horror) makes it very realistic so one could almost relate to their fear. The plot answers basic questions but more questions continue to arise about how one would live with this kind of chaos as we see the MC surviving all of this madness.

Oh gosh...
by Morrelan
April 21st, 2016, 4:34pm
Rating: 9.0  / 10.0
These characters, good lord. It's hard not to giggle at Tadashi every now and then, he really is ridiculous. Half the time I was rooting for him to be infected.
Aside from that, this is a pretty interesting series, kept me hooked. It wasn't scary or even
gross, I thought the designs for the critters were pretty cool (and kinda funny in the later half of the story).

Definitely recommend it, fun little read. And the bonus stories were neat as well.
Was this comment useful?  Yes

yuck
by kari+
November 19th, 2015, 10:17pm
Rating: N/A
not mutch to say since the rest of other people comments can exsplain. As for me. Oh god. I notice this manga at bookstore. Shiver and make me want to throw up. reading this but wanted to see how it ended....since it a short story...twisted. ending story was just ahhhhhh. guess this why i stay away from genre like this. shiver yuck. disturbing....
Was this comment useful?  Yes

bugs crawling on my skin
by whitespade
August 3rd, 2014, 5:37pm
Rating: 9.3  / 10.0
reading this, i can feel various bugs skittering across my hand, my nape, my back, scratching my scalp and biting me till i itch. this is the effect of junji ito's manga, with the other wordly beautiful character juxtaposed with hellishly ugly creatures wreaking havoc to their world. there is no real horror or mystery or plot, just endless slimes and tentacles and boils and pus and all the ugly and wretched things rendered in high detailed to increase the queasy and gag factor to the readers.

truly a work of art to elevate your disgust to perfection.
Was this comment useful?  Yes

Surprising...
by elementalblood
April 18th, 2012, 7:05am
Rating: 7.0  / 10.0
I actually kind of liked this one. Well, I really liked it but to read it you have to be in a certain mood and enjoy this kind of story. But really, to get the most out of it, you have to have a black humour streak and take this one a little more lightly than most horror series. Because, I mean really, fish with legs scuttling around like a bug? I can imagine my mother screaming "Get it away from me!!!" and that's what did it for me

If you start thinking of it humourously, this series is quite awesome ^_^
Was this comment useful?  Yes