Login to add items to your list, keep track of your progress, and rate series!
Description
From Omari's Sister:

"Pika Ichi" is the story of two painfully shy teens who love yakuza movies. An incident at school pushes them over the edge, and they decide to drop their mousiness in order to dispense some "justice." 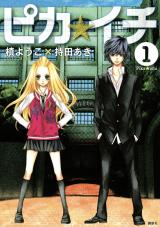 Fantastic at the beginning
by darcy3
June 6th, 2020, 8:33am
Rating: 9.0  / 10.0
Fantastic beginning of the series. I would highly recommend chs 1-12. After that it gets dicey.
Great series for those who want to read a shoujo yet still want some action scenes. The action has real weight and the characters are at risk for real harm and danger. That's something you don't find often in a shoujo series.

Pros
- Really fun character cast. Hanako is a little bit generic shoujo MC but she is still likeable. I loveee Tarou and the one-sided crush dynamic/being shy adds a nice layer to the story. Really fun sidekick characters like Manaka and Maboru. But hands down best character- Dr. Murase
- The yakuza movie backstory aspect was original and gave the characters some depth
- Dougen was a great twisted villain and his backstory was interesting (until they f'd it up)
- Humor was always well executed

It bothers me that shoujo series often have the potential to be really great and they don't go for it. Often times they setup for interesting developments and then backtrack or retcon when it is going into a more dark or series direction. I'm not sure why it's industry standard not to allow a villain who is evil.
This series is very similar to Arisa, and it was executed in a similar way. A great setup at the beginning and interesting potential, but lost out due to making the material more tame.
Was this comment useful?  Yes

Gah, so much potential ruined...
by SangMo
June 19th, 2018, 2:53pm
Rating: 7.0  / 10.0
Spoiler (mouse over to view)
Not only does the main bad guy basically gets forgiven for all the terrible things he started (like having a bunch of people beat the main girl half to death), the main guy and girl don't even get together even though it was obvious they loved each other.
Was this comment useful?  Yes

Fell Short... First few chapters a good though!
by mikomu
November 2nd, 2017, 1:33pm
Rating: 5.0  / 10.0
The first chapters were really gripping and fun, but as the series dragged on it felt like the author had no clue where to go with it. The series is over-dramatic, predictable, and the story becomes bland. The premise was interesting, but it fell short in the later chapters.

The main character is literally a Mary Sue. She has little faults and spends the whole manga fighting for justice in the school system. There is little to no character development. Which is a shame...especially for Naoji's character. He could have really been an interesting character if the author didn't make him so one-dimensional and unfeeling.

The whole story just feels like Hanako vs. Naoji and the the others. They don't go into depth with a lot of the characters. Even the main guy Tarou gets little to no development. Only thing I can say about him is that he's in love with Hanako and will fight anyone who harms her.

The art is good. That's really the only redeeming point for me. This manga should have ended at the 2nd or 3rd volume. It's literally 5 volumes of filler fluff.
Was this comment useful?  Yes

Interesting yet disappointing
by Linnoit
September 30th, 2014, 10:29am
Rating: 6.5  / 10.0
I really like the plot and the characteristics of the main characters, very unique, it's not like your typical clique shoujo. The story progression towards the end is really interesting and gets you really hype up. However, I personally think that the ending ruins it all.
Spoiler (mouse over to view)
I think that everything isn't well explained, especially the last chapter. It's rather rush and messy. All of the sudden one student "rebelled" and they seem to just ignore his rebellion and brush it off with Hanako's "confession". Then the story suddenly ends with a suggestion of building an university beside the highschool and the gang graduated(?) One can easily see how confused I am through this spoiler haha.

alright...
by scarlet warrior
April 30th, 2014, 1:56pm
Rating: N/A
The manga was good for me..although the story sounded so stupid to me..
I liked the two main characters..but I hated the ending..it felt like there was no romance...(just a little)
and the chapters contents were not interesting at all..
Was this comment useful?  Yes

First Chapters compared to latest
by Shift+Ctrl
February 28th, 2014, 8:33am
Rating: N/A
So the series really didn't turn out to be good for some during the first chapters. A lot would say it's not good and the plot line is so out there and the romance is nowhere to go, but when you actually read further, your interest increases although I must agree that the romance is a bit lacking, but since it is centered on a fight for justice, I can live with it. ALTHOUGH I REALLY AM DYING TO SEE WHAT'LL HAPPEN NEXT WITH TAROU AND HANAKO.
But over all, it's a great one

Great...for the first couple of chapters
by ayanechan
August 31st, 2013, 4:03am
Rating: N/A
Boy did this manga have heart. Sure, the first chapter was slow but once it got into the storyline it was awesome. It was like the Tsukushi Makino that never was--or really the one who never continued to stand up against the bullies at her school. That's what this story was like, two unseen people trying to make a difference in a prestigious school that had lost its way. It was only until it introduced the "bad guy has super problems we can totally solve" that it tumbled. It was a weak plot that should have--if ever--been introduced far later into the storyline where it would have held a bit more weight. How disappointing this turned out to be, but never-the-less its well worth a shot.
Was this comment useful?  Yes

Give it a chance! Its actually pretty good
by Ariaofthesong
June 17th, 2013, 9:01am
Rating: 9.0  / 10.0
I actually really liked it. Its very well done, and though many say the plot sucks, it doesnt. At first you think; "Ahh, here's some villiany dude who wants to destroy things for no reason and the main characters are going to kick his ass". But, and this is a giant but, thats not how it is.

The antagonist, who in my eyes isnt really a villain, has his reasons for what he does. Although he does what he does in terrible ways, he seems like a pretty honest person (behind that cold exterior). The more I read the more I understand that he is just a young boy trying desperatly not to drown in his own emotions. His loneliness and burdens overwhelm him. In the end, I think he just wants to be seen for himself and be free. And the great thing is... The two protags are learning this and they can't continue to regard him in the same way they had. Slowly, they begin to see that they need to help him first. I can't wait for more scans.

Spoiler: You can't help but feel bad for the guy. His own parents force him to wear handcuffs (which nobody notices) so that he can't escape and his mother makes him "relearn" kindergarten. The whole thing is heartbreaking.
Was this comment useful?  Yes

You can't take it seriously.
by Jeshia
June 26th, 2012, 5:44pm
Rating: 5.4  / 10.0
It's not a bad series, by any means. But what happened in the case of this manga is that the author began with a semi-ridiculous comedy/parody and transformed it into this whole family/school drama that you can't quite take seriously. And all the characters are cliche no matter how you look at it, so the only redeeming factor of this manga is the humor.

It's a bit fluffy, even for my tastes (with all the talk of "justice" and whatnot), and the all the characters (with the possible exception of Dougen) could use a nice smattering of reality into their faces. Or at least, stop trying to act so serious. The plot, which moves at a relatively rapid pace is one part predictable, two parts ridiculous, one part "dramatic." I'm still not sure whether the manga-ka wants the reader to take the so-called drama seriously, but my hunch is that she does, which is a shame. As a whole, the story is put together quite sloppily with what seems like little thought into one sequence of events before plunging into another, sprinkled with cliches and ridiculous yakuza scenes. The balance of drama and comedy (which is I think what she was going for) is poorly executed at best. One minute we have a snapshot of an obviously power-obsessed, reputation-obsessed, and otherwise creepy overbearing family (that is threatening to literally destroy people) and next we have a ridiculous yakuza scene, complete with all the cheesy dialogue.

I really don't know what to say. The way I read it, and the way I recommend people to read it, is lightly. Take all the drama with a grain of salt and laugh it off, because all the situations are so ridiculous. Give the "aww" scenes a little smile and the parody scenes (that can really not be taken any other way) a little chuckle. You do that and this manga is enjoyable.

It's humor. Badly executed at times, and with more drama than many would appreciate in the genre, but it's funny. I gave it a few chuckles, but I'm pretty sure I was just laughing at the ridiculousness of the entire thing, despite the premise being somewhat, and I use the word liberally, original. The cliches the manga-ka threw in are beginning to stack on top of each other, but at least we have a character that is intended to literally be omniscient, the doctor.

My recommendation, to sum it up, is to read it like a comedy. Fast, with little thought, and when you have time to burn. Laugh at the obviously fabricated amounts of drama (it's way too..... far-fetched (that's a nice word) to be real), and enjoy the admittedly ludicrous (and terrible) plotline. And yes, there are actually is one. But it IS funny.

Iffy
by 1122shadows
December 14th, 2011, 11:03am
Rating: 8.0  / 10.0
There's a lot of interesting things about the story that I really like but the story just isn't captivating though. She's cute and he's hot, but their romance isn't moving since this is more about fighting for justice etc, etc....The imagine transformation was good, that's always fun to read about. The female lead is strong and intelligent, also a good thing. Bullying was a factor, so I'll give it some points for that. But even with all these things going for it, I was kind of bored.