Login to add items to your list, keep track of your progress, and rate series!
Description
It was the roaring 20's, and the country was Japan. Bluecat, or Aoneko, is a debonaire aristocrat with too much money and leisure time. Along with his servant boy Tigerman, he dabbles in private detective work much to the chagrin of the real police detective Mr. Bee-Prince (Hachiouji). Bluecat is handsome--and yes, he knows it--witty, polite, and popular among the rich. However, his deviant libido, as well as his own attractive nature, often land him in danger.


Status
in Country of Origin
6 Volumes (On hiatus) 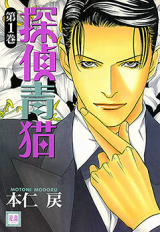 Note: You must be logged in to update information on this page.
Forum Posts Click to view the forum
Who do you prefer as Bluecat's lover? (may contain spoilers up to volume 5)
over 11 years ago

Elegant, Eccentric, Erotic, Emotional
by swak305
August 29th, 2012, 6:35pm
Rating: 10.0  / 10.0
I have a fondness for plots that aren't straightforward, ones that demand thinking with the big head ... and this manga has been a joy to spend time with. The Motoni-sensei universe is mind-bending at times, but never, ever dull. I applaud the hard work that went into interpreting such a layered series; some of it is truly inspired, although some people don't like the translation. I have to say that, at first, I had trouble with the transliterated names, i.e., Mr. Bee-Prince. I didn't understand why the Japanese names couldn't be preserved, with their significance as a descriptive sidebar. But the transliterated names in this context not only add a comedic, theatrical touch ... they help the reader understand the important of names as a descriptor ... yet another layer to this wonderful work. The stories get better with every volume. And the layer of wacky eroticism puts me in mind of Akedan, for some weird reason.

7/10 stars
by Anonymous
July 25th, 2012, 1:19am
Rating: N/A
At the very beginning I didn't favor it too much and thought it was bit...random (or maybe that's because I was reading it at 3 am...) But, after a while I really started to like Bluecat -the more-or-less main character of the story- and decided to stick through with it till the end because it's rare for me to find a main character that I don't hate and find annoying.
But, at one point it started to go into the past (I think...) and it was really...just, everywhere. The only story I liked about Bluecats past is the one with Glassbat, I thought it was the cutest story ever! I'd be cool if the author made another manga about little Bluecat and Glassbat

couldn't get into it.
by Izumi Morihara
February 24th, 2011, 1:51am
Rating: N/A
I simply could not get into it. For multiple reasons, bad music, migrain, the thought of Peter Griffin exlaiming his hatred for the Godfather because 'it insist upon itself'.... I also found the lack of cell shading to be... distracting, for lack of a better word.
Was this comment useful?  Yes

The only hang-up is that the dialogue can sometimes be a little - er - hard to understand? - but after the first few chapters you get used to the flow of things, and even the surreal situations start to make a deviant sort of sense. (Like Aitilye said, many of the characters are walking Freudian complexes - or other, more serious disorders from the DSM IV. I mean, seriously, someone get a shrink in there!)

Read this, even if you're not usually into yaoi. This manga is more a meditation on loss, absurdity and lust than it is a "gay manga" or anything else...

I actually feel kind of sad now that the scanlation's complete, because this manga has been part of my manga-reading life for many years now. Goodbye, Bluecat.

Do not go gentle into the good night.

Good but hard to read...
by brid
April 19th, 2008, 6:27pm
Rating: 8.0  / 10.0
If you like Motoni Modoru, you'll also like this series. If you don't, stay far away. There's plenty of over-the-top humor, some sexual violence, romantic relationships that are no where near cut-and-dried (your opinion of who Bluecat will end up--and there are a number of candidates--will change by the chapter), and lots of seemingly random plot developments.

That said, if you like that sort of stuff, you'll like it, but if you like an easier to follow, more developed story--and also dislike strange humor, you won't. Personally, I do like it--not all the time, mind you--but boy is this mangaka a unique read. There's no one else out there (who does yaoi) that's quite like this, so it makes for a unique, flying by the seat of your pants read, vs. the normal (and often dull) slice of life high school boys/buisness men in love storylines which seem to make up 90% of all yaoi. The world of Tantei Aoneko is its own crazy, unique place filled with crime, intrigue, and lust and the stories range from the absurd to the heartbreaking. As I said, it's not for every yaoi fan by a longshot, but many will quite like the uniqueness of Motoni Modoru's vision.

One final note, I don't like to pick on scanlation teams because they work hard and do it on a voluntary basis, but I must say, the translation for this isn't the best. Motoni Modoru really plays with language, so any translator trying to do one of her works really has a tough job, but the amount of engrish used in the scanlations really proves to be distracting at times. I think with a cleaner translation, I would've rated this series a bit higher.
Was this comment useful?  Yes

umm...
by candyloop
February 19th, 2007, 5:51am
Rating: 8.0  / 10.0
Sometimes I get the feeling Motoni Modoru tries to be too philosophical for her own good and sometimes she is just random. This series represent exactly that, sometimes it has very deep storyline that need to be thought over and sometimes it's complete wackiness. Starting from 5th volume the stories seems to make more sense and the plot is less “all over the place”.
Was this comment useful?  Yes