Login to add items to your list, keep track of your progress, and rate series!
Description
The everyday lives, games and hijinks of high-school girls at an all-girls school. 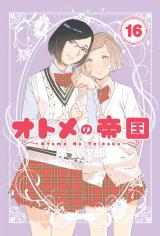 Short-chapter yuri ecchi SOL/comedy (and honest-to-god edge fest galore)
by Dickegrobe
April 19th, 2022, 2:13pm
Rating: 8.0  / 10.0
It's mainly very short episodic chapters of mostly light-hearted yuri SOL with a bit of comedy (or the other way round). Think Tsurezure Children, but not as 4-panel, a bit less comedy, slightly more mature, a bit raunchy and girls only. And it's hot, really.

The art is fantastic (mostly). Sure, in the beginning it may be a bit hard to tell the characters apart, but, boy, do they look gorgeous! Not your typical sticks with tits, no, they almost look like real people (very very very good-looking ones, of course).

As for story, weeeell, there isn't too much of that. Bunch of girls being quirky and/or falling in love, slow cooking, bit of more-of-the-same here and there (mostly done right). I wouldn't say that it misses anything in that regard. No, it's quite condensed if you will, mostly reduced to what matters. You never feel it lacks anything.

I have one complaint, though. Kaoru Yamada sucks.
Spoiler (mouse over to view)
Now, she can't be so bad, right? I mean, she is basically a joke, like, literally - she is about every dreamy rapey-feely cringe-shoujo prince trope stuffed into a single person. It's so over the top, you know right away she is nothing but comic relief. No problem with that, I agree ... buuuuut the thing is, nobody told the author. So he mistakes her for someone who could actually influence people, and very much so. She can be such a selfish manipulative bitch and wreak havoc like other people breathe. Not by accident but deliberately, and without the slightest care for anything or anybody beside herself. And she gets away with it, time and again. I really don't like that part.

the whole thing
by SAD_FIdelity
January 9th, 2021, 2:36pm
Rating: 8.0  / 10.0
I've seen many people's complaints about the manga being only about schoolgirls touching each other in a perverted manner, lacking any real plot or story; which is kind of almost exactly what it is - at least until volume 4(ish) onwards.
And I can't really blame anyone for just not wanting to read the whole thing because of how banal it might seem at first glance, something I might've been almost guilty of doing, too.
Comparing the first few volumes with the most recent ones makes it feel like you're comparing two completely different things, the theme, the characters, even the artstyle has evolved through the manga's 226 chapters (and counting) and almost 10 years of existance.
Personally I would say that this is not the type of manga for people that only read 2 or 3 chapters in order to tell if they've liked it or not (not that I think that's bad or anything, even I found myself almost giving up on reading it when I couldn't think of anything other than it being glorified ecchi!), and you'll have to read to a couple dozen 8 page long chapters until the characters start feeling way more like actual people and the relationships between them start feeling somewhat more realistic.

In conclusion, I think that, even after starting as just ecchi, Otome No Teikoku finally shines, after like 10 years of it's conception, as a slice of life-comedy-drama-yuri-romance-whatever manga about lesbian highschool girls.
Either that, or it's just that I fall in love way too easily with cute looking artstyles and lighthearted stories.

im bad at writing long stuff im sorry if i said the same thing thrice
Was this comment useful?  Yes

Slow start but good
by roydeer7
November 8th, 2016, 1:07pm
Rating: 7.0  / 10.0
As I said this manga starts slowly and if you dont know what your getting into than you would probably drop it but as i continued reading i started understanding the motivations and actions that the girls go through i realized with that the reason i started this manga is not the same as why i continue reading it.
Was this comment useful?  Yes

I love it!
by Tentacle
April 5th, 2016, 8:59am
Rating: 10.0  / 10.0
As a lesbian I truly enjoy this because of the realistic characters and the beautiful art! The girls just look so soft to touch and each and every one expression is very realistic and really makes the art pop out.
This sort of reminds me of Sakura Kiss, but less manga-cliché and more ecchi. I just adore how the girls are shown as perverted in a way that makes it come from them as characters and not from the author wanting to just draw exposed girls. And there are also quite a few adorable love stories among all these wonderful characters and the pointless (but funny) storylines of teenage girls.
Was this comment useful?  Yes

cute and fun
by kari+
February 3rd, 2016, 2:15pm
Rating: 9.0  / 10.0
Not one for these type of manga but it funny and cute! There character i rather have focus more on. just mini stories of each character and for eye candy shots i guess.

this is fun
by W5vWCqwBjSuA8dnA
April 12th, 2014, 4:40pm
Rating: 10.0  / 10.0
I usually don't like reading hentai/ecchi, but this one makes me laugh so hard; it's funny and easy-going, and with somewhat innocent characters. And the ecchi is drawn in a "cute" way, not all the way sexual. Maybe I like this manga because the ecchi makes me laugh instead of roll my eyes...
Was this comment useful?  Yes

Reviewers under me are just wrong :/
by DarrisonSaber
February 6th, 2014, 7:04pm
Rating: N/A
This is one heck of a perverted manga, bordering borderline h. No this is not realistic in any way possible; it's literally just girls wanna touch other girls every chapter! There's no story to this, it's simply eye candy. So if you enjoy eye candy, read this. If however, you enjoy a manga with depth, this is not right for you.
Was this comment useful?  Yes

very enjoyable
by yuno19
December 23rd, 2010, 7:23pm
Rating: 8.0  / 10.0
from the author of maka maka, this is less blatant manga which offers the same kind of enjoyability. reading this manga is like tracing highschool girl thought through their honest, or should i say, curious series of action. i think, the author is very talented in telling excitement in characters' psych within some bound of subtlety.
Was this comment useful?  Yes

Awesome
by akari_mizunashi
December 15th, 2010, 9:09pm
Rating: N/A
The art in this is seriously so cool. It looks like some really hip josei. That and the surprisingly realistic depiction of teenage female interaction (as in they actually look and act their age, not like 8-year olds with D-cups) make me have hope for the future of ecchi if Kishi sticks around a while longer.