Login to add items to your list, keep track of your progress, and rate series!
Description
This world is broken, so are humans. Shuu is one of them. He's a talented sniper who keeps a broken android, named Alice. Together they live like hermits and make living by exterminating caravan robbers, until one day the woman that Shuu saved invites him to live in a commune. 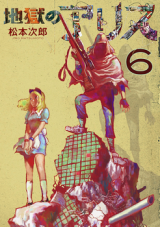 Harsh, trippy, and emotionally strong.
by apsyda
July 28th, 2020, 11:55am
Rating: 8.0  / 10.0
Matsumoto's apocalyptic world is a brutal one (as most are). Rape, murder, and mutilation is abound here.
If you are not comfortable with that you should not start reading.

If you can continue you're diving into a stark and semi-nihilistic work showcasing the effects of trauma of children, the breakdown of society on humanity, and the pains of growth.
The main character is a violent boy named Shuu that acts as a neurotic and unstable lone-wolf sniper baiting out raider bands and killing them from a distance.
The secondary cast is mainly carried by Eliza, a girl about Shuu's age with possibly an even harsher violent streak and a deep desire for affection. And Makilda, an woman in her 20s that acts, or tries to act, as a mother figure to the children that end up orphaned in the commune she runs.

From that starting point we end up with a conflict between well-intentioned but possibly not brilliantly led order against destructive but horrifically competent chaos.
Its not a pleasant read by any stretch of the word. Neither does it give an easy catharsis for the struggle. But its still very much worth the read.

Matsumoto's art is wonderful through this, as rough and dirty as the apocalypse itself but gorgeous all the same.
The humor that is present is as black as it is genuinely funny.

A hard and unyielding manga, its very much worth the trouble to get through.

Ridiculous
by teahknight
March 25th, 2019, 8:23am
Rating: 3.0  / 10.0
It's one big rape festival, sprinkled with violence, war and mentall illness. I think almost all female characters have been raped so far. I'm dropping this cuz the ratio between rape/ violence and the actual plot is getting ridiculous, even Berserk with it's penis shaped monsters didn't go that far. Too bad, cuz the art style is good and postapocalypse is one of my favourite generes.
Was this comment useful?  Yes

I began reading this in 2013 and the scanlation stopped. But it has restarted again from volume 4.
Was this comment useful?  Yes

More of Matsumoto's
by pmt7ar
April 30th, 2014, 2:07pm
Rating: 9.0  / 10.0
After finishing reading this, I can say I'm not disappointed at all. It screams Matsumoto Jiro everywhere. It has the brutal, cruel and nonsense vision of a soulless dystopia, some psychological issues and its quota of humor. It's a mix of Fressia and Wendy, but this time the characters are really lovable. Shu reminds me of Hiroshi.
There is one volume and a half consisting purely of a flashback of Shu's past, and it was I liked most.

It is now my second favorite Matsumoto manga, behind Fressia.
Was this comment useful?  Yes

Grade 'A' Material
by babel
May 10th, 2013, 7:46am
Rating: 10.0  / 10.0
This is dystopia done right....
A gritty art style which suits the story, believable characters, lots of violent action balanced with a little black humor. It has a sort of retro feel that reminds me of some of Leiji's stuff (which is about as high a compliment as I can give). Recommended adult read for those who like their manga hard-hitting but still slightly tongue-in-cheek.

Gritty n Satisfying
by Bitterkid
May 1st, 2013, 10:10pm
Rating: 9.0  / 10.0
This ones a real treat for those that love the whole post apocalyptic setting. Basically about a kid whose become a skilled sharpshooter and does whatever it takes to survive in the cruel world he was born in.

Finally one that sort of makes sense!
by RooftopSwordMaster
January 6th, 2013, 2:00am
Rating: 10.0  / 10.0
A lot, if not all of Matsumoto Jiro's works are a bit too complex psychologically. However I really love his artwork (the chicks he draws are all awesome) and creativity which makes up for his confusing story telling. And this manga actually makes sense and it has the potential to be freakin awesome! I will have my eyes on this one til its complete cause its really great so far. I just pray it doesn't mentally breakdown like a lot of his other works...
Was this comment useful?  Yes