Login to add items to your list, keep track of your progress, and rate series!
Description
Hilarious manhua (Taiwanese manga) about a girl to whom money means everything.

Dahasu Zuhn's father has just gotten into debt and now his son, Dahasu Zuhn, is in poverty. He meets a girl called Amei Jin who's super strong and has a reason to get money. Dahasu also attends the High School, Freedom High School where he can get in for free. He meets Jin at the school and learns that she needs money for a special reason. Now he is her slave because he owes her 20,000 yen. Whatever shall Zuhn do? 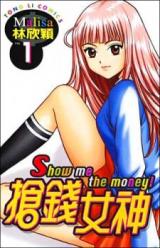 And, it really could have stood to be 50% longer.

I'm glad they didn't play on the used-to-be-rich card too strongly, the guy was relatively well adjusted and not wishy washy.

Solid
by zimzimbadabim
February 23rd, 2012, 2:38pm
Rating: 8.0  / 10.0
Good plot, good characters, and an ending that doesn't dissapoint. Not spectacular, but better than most. Yes, it has lots of cliche, but it uses it well. The story is it's own and doesn't copy anyone. I give it an 8.
Was this comment useful?  Yes

Cliche manga
by bull3thole
November 6th, 2011, 5:06pm
Rating: 6.0  / 10.0
Everything about it is cliche. There was 1 or 2 stuff that was funny in the manhua and that was it for me. There were moments in the manhua that was suppose to funny, but they were not because it was an overused plot. A insanely strong girl that is super strong for no apparent reason and a rich guy becoming poor. Even though it is an overused plot, its a decent manga to read for a change of pace.
Was this comment useful?  Yes

cliched but still good..
by otakuness
July 2nd, 2010, 6:19am
Rating: 7.0  / 10.0
you have the rich gone poor boy who doesnt really have any strong points but somehow acts as the mediator..
stingy, tsundere- like female lead who has unexplainable strength..
and the jealous seductive, spoiled sister- of some sort...
and there's your story.. just add some drama on the side and its there!!

actually it is quite boring but for some reason it reminds of the old times.. the old types of characters and its been a really long time since ive seen a girl that strong aside from Sunako of YamaNade... and the way she carried that car and spun it... you know those kind of girls... and its not that long too!!!

if your bored or your mind is tired from all the intellectual stuff give this a go!!

mediocre
by takitogr
July 25th, 2008, 1:58pm
Rating: 5.0  / 10.0
i had some laughs with this one...funny at parts but it feels too short,the story is rushed at the end too much and the plot in general is very generic
Was this comment useful?  Yes

Very amusing.
by elvisrules
July 11th, 2008, 7:46pm
Rating: 9.0  / 10.0
I tend not to like Comedy, but I loved this manhua and found it absolutely hilarious. Highly recommended!
(as has been previously mentioned, it is a pity that it is so short and that the ending was rushed, but it still a must read!)

short but good read
by tazman0208
February 26th, 2008, 12:21pm
Rating: 8.0  / 10.0
I really enjoyed this manga. Had a good, organised plot that fit perfectly with the length of 11 chapters. Unfortunately, for those who were expecting to see romance you will be disappointed. There is practically no romantic development between the two leads until the end of the story. Also, the comedy is quite weak, if not non-existent. The art style is quite good.
In conclusion, good storyline, good art, lacking in romance. In regards to the length I have no complaints as long as the story made sense and was concluded nicely with nothing left unresolved.
Was this comment useful?  Yes

Great manga, but many shortcomings
by Conquestor
February 18th, 2008, 6:14pm
Rating: 7.0  / 10.0
Excellent story/art, and direction. I won't even complain about the length, as it fits the story nicely. However, they have many un-resolved arcs, and the characters are simple stereotypes.
Was this comment useful?  Yes

I do think it would have been better with another 1 or 2 volumes to help flesh out the characters more, especially to really expand upon the romantic aspects of the two leads, but for what it had to work with I thought it did well.

I would definitely recommend this one to anyone who enjoys the "romantic comedy" genre.
Was this comment useful?  Yes

A few words about it's shortness... I agree - I want more, but in this case it's enough, because the plot is short by it's self. If it would be longer, that it won't be as interesting as it is now. But for me, autors should just add some more actions in plot=) What I'm talking about? I really want more! ^_^

So, we have very good, but short, manga, with really interesting and funny story. Certainly a good manga!
Was this comment useful?  Yes