Login to add items to your list, keep track of your progress, and rate series!
Description
High-school girl, Kanzaki Mitsuki, just got a new older brother, when her mother remarries a man with a son. Soon after, her new step father gets transferred overseas and her mother follows him there, leaving Mitsuki alone with her new step brother, Yuuya. Feeling abandoned by her mother, she stays distant from Yuuya, never really getting along very well with him nor even keeping a conversation with him, until one day.... 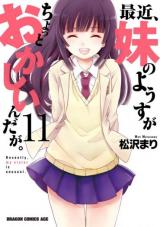 Note: You must be logged in to update information on this page.
Forum Posts Click to view the forum
Saikin, Imouto no Yosu ga Chotto Okaishiin Da Ga Gets Anime
over 9 years ago

inconsistent, annoying, I regret completing this one
by godfrey
August 10th, 2021, 6:03am
Rating: 3.0  / 10.0
i'm a completionist reader in general and don't usually regret reading through to the end even if a story is bad. in this case, I wish I'd dropped as soon as I started to get inklings that the author didn't have a plan (or they weren't allowed to pursue their plan by the editors or whatever). some interesting components utterly spoiled by bad execution.
Was this comment useful?  Yes

BAIT
by multiedge
April 8th, 2021, 11:47am
Rating: 1.0  / 10.0
what I hate the most is series that uses a particular subplot as a bait to attract readers.
For example, this one has incest tag, but nothing incest actually happens.
It's similar to most harems, but the MC ends up with only 1 girl.
I reallllly hate, bait genres. It's hard to look for a particular genre, weird, perverted or whatever, when the author only uses it to bait readers.
Was this comment useful?  Yes

But from there, as the series begins to wrap up and things get more serious, all the silly, pointless, embarrassing moments just stop happening entirely. While it was enjoyable watching the author spin the story—
Spoiler (mouse over to view)
the amount of retconning that went on in the last few volumes was egregious and one of the main reasons why I started to tire of the series
—the absence of those formerly routine ecchi situations really detract from the series.
Spoiler (mouse over to view)
With the exception, of course, of the occasional display of the MacGuffin—the TST. But even this is massively toned down in the final volumes; in one case we only see the heart meter.

Really, I think the author had a decent (but not stand-out) supernatural story, loaded it up with ecchi to help get it printed, and once it was getting optioned for a TV series dumped it all and tried to make it more "legitimate".
Spoiler (mouse over to view)
That in the last couple chapters, we even had the revelation that "Oh the heart meter will fill even if we don't have physical contact!" was a particularly weak way of getting out of the story.
Was this comment useful?  Yes

A horrible porno and nothing else
by residentgrigo
December 27th, 2013, 12:16pm
Rating: 2.0  / 10.0
How is this getting turned into an anime and that is also the sole reason i looked at the manga but i wish i didn´t. The setting is overused and creepy, the characters are just the worst and the art is bland and amateurish but if you want to read a series where the leading "lady" is raped by a half lesbian ghost every 10 pages while pissing herself once a chapter than this one is for you. If not don´t even start but manga by Dragon Age tend to be street trash in general so what did i expect. An explicit sex comedy about a ghost that is actually readable would be My Lovely Ghost KANA (7,5/10) and that Patrick Swayze movie is a decent watch too. Koi Kaze (8/10) further proves that a manga about incest can work just fine and Sensei o Mite Kudasai (7,5/10) would be an example that hentai doesn´t have to suck all the time or even be misogynistic. So stick to all of them and just walk way.
Update: The anime won the "audience price" for being one of the worst animes of 2014 by ANN so there is that too. This is shonen Borderline-H at it's worst.

Incest is wincest?
by imercenary
December 13th, 2012, 7:19am
Rating: 6.0  / 10.0
This is pretty strange story to read if you're in it for the romance. The description here isn't that great since after the first few chapters, the story is revealed to be "have romantic feelings for your brother-in-law under orders from a ghost or DIE." If you can get past the fact that the sister is being forced into the situation; this is a great story. If you can't; turn around and walk away. The entire romance IS forced as the ghost frequently possesses the girl into acting out ecchi scenes and that somehow causes her love meter for her brother to increase.
Was this comment useful?  Yes

After the 1st chapter, it's terrible!
by jeffreymgibson
April 12th, 2012, 10:50pm
Rating: N/A
When I read the description of this along with the 1st couple of chapters, I thought this would be good. However, it gets a duller after each chapter. It's one of those stories where the writer leads you on thinking something interesting is going to happen, but nothing ever actually happens. I think the manga has become flat out terrible and I can't understand how the heck it's getting an anime. If I were 12 or 13 I might like this better, but I'll never know.

Hmmmmmmm
by SOSAnimeBoy
January 13th, 2012, 11:50am
Rating: N/A
Not sure what to think of this one. Not a big fan of incest, so normally I wouldn't be that interested, but there's a curious twist here so it isn't like other Onichan-obsession manga. I'll have to see more chapters before I add a rating, but it's ok so far.
Was this comment useful?  Yes