Login to add items to your list, keep track of your progress, and rate series!
Description
When an aloof but kindly teenage boy named Tatsumi helps out someone who'd collapsed on the banks of a river close to his home, little does he realise that he'll soon be sharing the bathroom of his modest town house with Wakasa, a self-obsessed and playful merman. Impromptu visits from Wakasa's friends - all of whom are aquatic animals with human traits - while fun, don't exactly make things easier.

Welcome to Tatsumi's bathtub. It's getting a bit crowded. 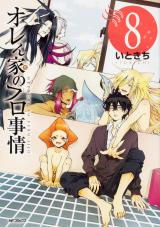 Unique, funny, cute
by calstine
June 27th, 2017, 4:49am
Rating: 8.0  / 10.0
The premise is unusual, so there are a lot more opportunities for humour than the typical "house-sharing with strangers" setup allows. And unlike the anime, which -- while nice enough considering its indubitably tiny budget -- skipped over a lot of establishing character moments, the manga takes it slow, so the gags are that much funnier (and the touching moments that much sweeter).

The characters aren't overdone stereotypes, which is quite a rarity in the gag genre. They don't behave that abnormally, but the sum total of their individual personality quirks never fails to transform everyday occurrences into silly shenanigans. The art is nice, too; pretty enough to earn the 'shoujo' tag, but goofy enough to suit a comedy manga.

The first volume is a bit awkward in terms of pacing and some of the jokes fall flat as the mangaka sets up the premise and introduces the majority of the cast, but after that the humorous aspect improves rapidly and the flow of the story becomes much smoother.

As for the "sexual allusions" the previous commenters are so hung up on: they involve the protagonist's brocon younger sister, feature in maybe three pages per volume, and are entirely ignorable. If you read shounen or seinen at all, you'll never even notice. I don't approve of it, obviously, but it's not a deal breaker by any stretch of the imagination.

super hilarious
by sareru
January 23rd, 2015, 12:53am
Rating: N/A
and so much fun oh god
i love the main characters and wakasa's friends so much, and i'm so sad the anime episodes are only 4 minutes each ;Ö;
i'd generally give it a 10 but since i didn't like how they're treating the little sis it's gonna be a 9

Ehhhhhh
by varianthart
September 18th, 2014, 6:17pm
Rating: N/A
It's ok, but keeps making sexual references about a small child, which I find entirely unnerving. Dropping it because there isn't really enough going on to make up for that.
Was this comment useful?  Yes

i love it
by ahappygoat
July 18th, 2014, 6:47pm
Rating: 10.0  / 10.0
so far, its cute and funny. but it doesnt seem to be shoujo at all (and honestly , lets please keep it that way. id hate to have some random female character show up suddenly and take away the attention from the merman and main character)

but really, so far its really cute and funny. i hope the rest gets scanlated very soon!
Was this comment useful?  Yes