Login to add items to your list, keep track of your progress, and rate series!
Description
Deimos was once a handsome god. He loved a beautiful goddess who returns his sentiments. The problem, well, she is his sister. For their crime against nature they were struck down out of Olympus. The brother is now a demon and the sister a rotting corpse at the bottom of the ocean. Deimos must choose between his sister and her living human incarnation. His sister is jealous. The girl is horrified and unsure of just what to make of her situation. 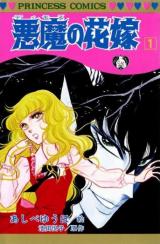 Note: You must be logged in to update information on this page.
Forum Posts Click to view the forum
why is no-one doing this great manga!?
over 11 years ago

Taking a myth to a whole new level
by cliff
March 14th, 2011, 11:15pm
Rating: 9.0  / 10.0
A beautiful god falls in love with his own sister. They were condemned by other gods and goddesses. Deimos became a demon while Venus bind a punishment. Venus was said to "reincarnate" so Deimos looked for her. It turned out there's a human who shared a similar face with Venus. The story is a compilation of stories about Deimos-Venus, human greed, jealousy (all that ugly but humane stuff), and also following the human form of Venus. It is classified as fantasy as well as horror. It's dark but it's beautiful too....

I read it but it wasn't completed. I'm dying to know the ending because this manga is such a complex manga. It combines myths with horror and psychological stuff - all the good stuff. It talks about karma as well as some other things. The drawing is kinda old and has those sparkly flowery background all the time but anyhow, the story about Deimos and Venus.... can't go wrong with it.
Was this comment useful?  Yes

wish there was more............
by blackknight
September 30th, 2010, 9:43pm
Rating: 8.0  / 10.0
I read all the available English volumes. They were really good. The art is nice, even though it's 70s. The main characters are well done. i like the fact that each part is totally different than the one before. I'd really like to find the rest of this one in Japanese. I anyone finds these in English, grab them while you can because they are hard to find.
Was this comment useful?  Yes

Pretty good
by zombiefetishlove
August 30th, 2010, 8:28pm
Rating: 9.0  / 10.0
(if you're wondering how i got my hands on the official english version,then check a used bookstore. got all volumes in mint condition^_^)

i really liked this. although it had some weird, stupid behavior
Spoiler (highlight to view)
a girl cuts her own ear off to prove that she didnt steal earrings...
. im not really sure how that works out, but okay. this was written in the 70s so i guess that can be forgiven.

other than that, this is basically a horror/tragedy episodic shojo where the only recurring characters seem the be the main ones. Deimos is evil, the girl is realistic enough, and the sister(venus) is sad and hopeful.
the romance moves really, really slowly. in 7 volumes i didnt see much change in the romance, but i feel that venus was really characterized nicely, and there seem to be no cliches. at ALL.

so, moving on to the episodes. there are few happy endings, and many unhappy/tragic ones. the art is lovely, and if you manage to track these down you should keep them.
Was this comment useful?  Yes

I wonder if it's still on print in Indonesia... I should have bought it back then, but I was too little and scared to read it ^_^

haha.. i feel the same way... 'pengantin demos', isn't it? i read this when i was in elementary school... though maybe i was too young and didn't really understand, this one is one of my fave mangas that time along with crystal dragon T_T i hit this page because now i'm in a-desperate-mode looking all over the places for this manga series... the indonesian translation one i mean... googling, online store even went to used bookshop... but it sold out... i think it's not only me who thought this manga will be a valuable collection.. XD
yeah i reaaaally regret that i didn't bought it back then.. (if u know some infos tell me 'kay? =3)

this is a classic horror-romance manga that worth enough to read, a to collect T__T

Edit :
well, finally.. i've got the manga..... really love these series and glad i could add it in my collection

sigh...
by fictionalscience
November 5th, 2007, 5:14am
Rating: N/A
I wonder if it's still on print in Indonesia... I should have bought it back then, but I was too little and scared to read it ^_^
Was this comment useful?  Yes