Nao and You are cousins. You began to live with Nao’s family after he was abandoned by his own mother. Ever since then, he is always together with Nao and Nao’s childhood friend, Haruki. Haruki enjoys spoiling Nao and even though You is stern with his words, he is always gentle to Nao too. As time goes by, Nao finds himself being attracted to You, and both You and Haruki finds themselves falling more and more in love with Nao. But one day, out of the blue, their love became something that cannot be conveyed? 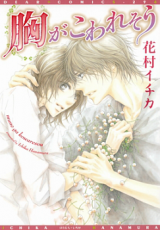 
Category Recommendations
Nibiiro no Hako no Naka de
Ishakoi - Isha no Koiwazurai
Kimi Iro Parasite
Shun-chan Kocchi Muite!
My Childhood Friend Is Too Provocative for Me

Melodramatic cuckening
by Baniita
January 12th, 2023, 2:55am
Rating: 6.0  / 10.0
I came here for some real heart-crushing, with a title like "My Chest (i.e. heart) Seems Like It Would Break", but all I got was dumb melodrama where the 'uke' is 'uke' personified to the point where he might as well be a dainty girl. rip. like he's some mary sue there. Everything was a cheap misunderstanding and it just felt all so... unnecessary lol.
So all the artificial angst is over a perceived one-sided love. bluh. weak. btw they're not even blood-related cousins, he's a step son lmao, so there's nothing to angst over!!!
It was a mistake to let us see Nao's POV so early lol.
Give me chest-crushing, excruciating pining after something seemingly unattainable or give me death. this ain't it.
Was this comment useful?  Yes

I though it’s ok but I was wrong
by WhiteIsBlack
October 23rd, 2019, 7:14am
Rating: 1.0  / 10.0
The beginning seems interesting and I was into the middle conflict but reaching the end, I quickly lost my excitement and side with those disliking and criticizing it. Even though the art is good, I don’t like the author and artist’s stories anymore. I don’t like the sex scene either.
Was this comment useful?  Yes

I cried my eyes out
by YanaseRyoko
November 29th, 2016, 7:11am
Rating: 10.0  / 10.0
I really love hanamura sensei. The art is beautiful and so delicate, you are gonna loved it, the story is really cliché but its really emotional and so sad actually you are gonna ended up with the heart broken bc haruki..
I'm gonna cry again, this one really got me like all the works made by hanamura sensei but I wish for more things.

The whole 'package'
by OmNom
October 19th, 2016, 12:25pm
Rating: N/A
This manga is a combination of one-dimensional characters, tedious melodrama and overall just an extremely bland story. If I have to be generous, the meaningless misunderstandings and vapid development here could be overlooked because they're circumstantial and not something permanent that the author can't try to improve on. What's more crucial though, is that the most detrimental issue I've discovered from her works is how monotonous and insipid her stories become from the way she presents them, and this is not something easily unlearned in a short amount of time for a storyteller. There's no climax building, no mood setting, every part of the plot just sort of appears chronologically in a weary fashion, as if the only purpose the manga serves is to report on an event that happened and not to actually invoke something that resembles an emotion out of the audience.
I'll probably still look around for the mangaka in the future if she does come up, and hopefully will be able to see improvement in her later works.
Was this comment useful?  Yes

Not my cup of tea
by Tentacle
June 17th, 2016, 1:33pm
Rating: 5.0  / 10.0
I gave this my all but after 4 chapters I almost wanted to give up. There is no suspense at all even though this story is centered around a huge misunderstanding. It's basically an overly dramatic farse with pretty art (that isn't to my taste though). I guess I can see how some people would find this highly enjoyable but personally I wouldn't recommend this to anyone I know.