Login to add items to your list, keep track of your progress, and rate series!
Description
From Tokyopop:
In the future, the most popular game in the world is Angelic Layer. Contestants must raise and train their own 'Angels' (or fighting dolls) to compete in tournaments. Enter Misaki Suzuhara, sixth grade Angelic Layer prodigy. With her speed-type angel, Hikaru, many people think Misaki stands a chance at winning the championship. She'll have a lot of help along the way, but the road to victory will be not be an easy route, especially for someone as young as Misaki. 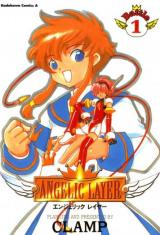 Okay...
by Okumatte
June 8th, 2011, 10:51am
Rating: 9.0  / 10.0
It was an okay series. It had a cute bit of fluff and a couple (mostly expected) twists. The only thing I think is weird is that the main character wins almost all her battles. I understand she's a prodigy, but her winning streak is well... too high for a beginner (in my opinion).
Overall, though, it was pretty good, but not for when you want to have an extremely deep story. It's light, cute, and fun
Was this comment useful?  Yes

Well...
by 0oKat~0
December 12th, 2010, 1:39am
Rating: 9.0  / 10.0
Truthfully, there really wasn't much depth in the entire series. Like Tsubasa and Chobits, this manga is also drawn by CLAMP, but the premise for this manga is a lot more kiddy-ish compared to the previous two. So don't expect deep, thought-provoking events to happen, because it doesn't.

But where this manga lacks in depth, the uniqueness of the storyline is what drew me in. I totally fell in love with the game that the entire plot basically revolves around~ =D The light fluff and puppy love is just too cute! For those in the mood for such things, I would recommend this. The anime is a lot better than the manga though.
Was this comment useful?  Yes

Spoiler (highlight to view)
Hikaru wins every battle but her first. it's awfully unrealistic and most disappointing.

I'm led to believe that the anime is a great deal better, though.

Not that deep
by Fareki
July 17th, 2009, 7:51pm
Rating: 8.0  / 10.0
This manga doesn't really have any deep meaning to it. It's like the others say: It's good clean fluff. It's cute and all, but when I read it, I was sort of in the mood for some really deep psychological stuff...or with shocking twists, like Tsubasa. I guess it depends on whether or not a person is in the mood for this stuff, or whether they like it or not.
Was this comment useful?  Yes

This is pretty cute
by squares
October 11th, 2008, 12:19am
Rating: N/A
A major thing for me in manga is the art. CLAMP is one of the authors/artists which I look at especially for this.
After looking at stuff like X and RG Veda, this is really a far, far step forward. It looks polished, and I suppose the themes are different, but dude, even Rayearth was looking better than the last two.
Anyhow, this series was adorable. The theme and art both were just too cute!
Was this comment useful?  Yes

WHAT?!
by yumemiru
May 13th, 2008, 8:45pm
Rating: 8.0  / 10.0
I DISAGREE. Definitely disagree. This manga was very interesting and the storyline was very inticing. Sure, it's not too deep and most of the twists can be predicted even before they happen, but it's still good.
This manga obviously isn't very thought-provoking, but it's nice and good fluff. I mean, everyone needs their breaks, and this manga would be it. It's done in the tradition of popular mangas like...Cardcaptors and other excelling female protagonists.

The art's same as other CLAMP mangas(Tsubasa ring a bell?), so I really doubt it looks that kiddy.

But I s'pose it's not for everyone, and you're entitled to your own opinion.
Was this comment useful?  Yes