Login to add items to your list, keep track of your progress, and rate series!
Description
Top reporter Tsuchiya writes a story that drives his friend to suicide, leaving his friend's son an orphan. The boy vanishes and Tsuchiya spends two years searching for him; while his own status as a reporter falls. When he finds the boy Fukuzawa he takes him in, without revealing his connection to the father, and tries to teach the lonely boy to rely on him. And perhaps to teach his own heart to rely on another as well... 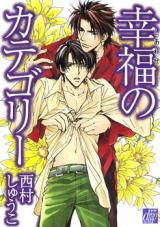 Oh the heartache!
by Namiya
July 9th, 2012, 3:21am
Rating: 10.0  / 10.0
This is a pretty good manga both story and character wise.
The plot has a somewhat serious, sad and dark touch.
Both the uke and the seme are good characters, they're likable and reasonable.
The uke is not one of those super strong ones but he isn't completely weak and ignorant either!
He has a difficult past and loves the seme a lot.
Spoiler (mouse over to view)
The reason why he went with the other guy and spent the night with him wasn't because he did it freely, as it's said in the manga, he was trained to do so, to be obedient to the guy, trained with pain and knifes and threats. Not everyone has the kind of strength to oppose that!
Feeling threatened like that, it's reasonable to go with the person and endure what they do to you.
Not like he didn't object! So NO, the uke is not pathetic and weak and freely cheating.
There's a lot of bitter-sweetness in this, and I really enjoyed the heartache!
I'd recommend this to anyone, especially people looking for a story that is not just super-happy rose-colored romance!
Was this comment useful?  Yes

Worth Reading; But Not As Impactful As It Could Be
by MightyMaeve
December 18th, 2009, 2:47am
Rating: 7.5  / 10.0
The basic story line was appealing, but the weaving of the tale fell apart at times. The art was darkly lined, bold and active which partly saved the straggling story. I really liked the two characters and would love to see her try this one again with her improved characterization and compelling relationships between individuals--both factors which were also straggling a bit behind in this story. My two favourite stories by this mangaka are 2005 & 2007 releases. She truly seems to improve with experience. This story is so good, it almost saves itself from its 'needs improvement' relaying.

not good
by mangafan321
October 12th, 2009, 9:58pm
Rating: 1.0  / 10.0
what a pathetic uke, he claims he wont cheat when on the last chapter he followed a man that would order him around and hed have sex with him whenever he wanted. he already cheated on his partner why is he claiming he will be faithful? what sucks is that he didnt even fight off the other guy he just went to bed with him all night long and didnt even try to fight him. its disgusting....
Was this comment useful?  Yes