Login to add items to your list, keep track of your progress, and rate series!
Description
Ten contestants agree to put their life on the line to have a chance of winning 50,000,000 yen. To win, they must survive 10 days inside the prison... 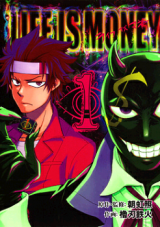 Derivative, preachy, poor translation...skip it
by MatrixM
April 27th, 2022, 3:01am
Rating: 4.0  / 10.0
This was obviously inspired by some of the manga created in Bakuman. But it's quite an amateur attempt.
There's only 10 days in the game which means character relationships, especially the roamnce, have to be incredibly rushed. There's lot of preachy talk about how the world works that doesn't actually make sense.
And the translation makes it so you can't really understand what they're saying about such things anyway.
It's a waste of time. I finished it ten years later cos i was curious how it ended.
Was this comment useful?  Yes

1. Awful psychological explanations:
I am a psychologist myself and all the psychological terms in this manga are either handled extremely superficial (again: it‘s a Shounen after all) or just plain wrong. The Stanford prison experiment is mentioned, however psychologists are not taking this one serious as it had many methodological failures. Reproducing this experiment showed that prisoners and guards did, in fact, cooperate with eachother. The mangaka should‘ve done some research….

2. logical errors:
E.g. some participants wear mouth masks to take away their sense of taste. And the people suddenly don‘t talk anymore… we all know since Covid that you can speak perfectly fine with a mask on. The characters in this manga who wear a mask don‘t do it, which doesn‘t make any sense.
Or one scene, where a character explains a psychological concept to another character by drawing on paper. The problem? The other one wears an eye mask…. obviously the drawings were meant for us readers, but in-story it‘s completely stupid to draw pictures for a blind person…

3. Translation is god awful
Ok, that‘s not the mangakas fault, but since there is no offical translation we have to read the version by someone who clearly doesn‘t speak english very well. Makes it hard to understand many dialogues in the manga.

5. no plot twist that’s worth mentioning

6. too much comedy for this kind of manga. It just doesn‘t mix well and feels off.

7. „romance“ between two characters develops within literally just 2 days, until they say „I love you“ to eachother. Give me a break.


Don‘t read it. One of the worst death game-manga I‘ve ever read.
2/10, 1 point for the artwork that is at least acceptable, and 1 point for the idea with the depraved senses. That‘s a cool idea. A story with this premise should be done by a mangaka who actually knows how to write a suspenseful, great story.

Dark look on emotions
by SageKage
June 24th, 2016, 7:28pm
Rating: N/A
Are you looking for an interesting, puzzling, mystery of a death game!? Don't read this.
This is like a psychologist's love story based on the most basic inner workings of a human mind. When I say basic I mean basic.
Dr. Frost might be a better psychologist's love story.
Only read if you are in a neutral or happy mood.
Not to many tricks or exciting ideas in this one.
The plot and character development are so mediocre you might even stop reading it after the first three chapters.
Was this comment useful?  Yes

Average In All the Wrong Ways
by DoujinHunter
September 20th, 2015, 8:18pm
Rating: 6.0  / 10.0
This is a very standard “game of death” story, with lots of overwrought facial expressions, typical backstories, and incoherent pseudophilosophical reasoning. The characters are unmemorable and the twists are cliché and have little impact. Overall a very average story.
Was this comment useful?  Yes

Kind of a waste of time
by YukiSaito
April 17th, 2015, 9:37am
Rating: N/A
At first the plot was simple: people are trapped in a place, each sense is taken away from them till they have none, and only when there are 5 people left or they reach 10 days are they released. The usual survival politics-I steal food for money, you kill someone behind their backs, etc. Everything was normal and okay. Until the ending. Don't be fooled by the art, though. The art held a humorous twinge while the plot was bloody.

Spoiler (mouse over to view)
Was it not obvious that the guy in specs was the one ordering everyone to be killed? He was the one playing with their emotions, their trust. Although I do admit it was a little surprising for the artist to be the accomplice, the 'psychologist' was the most suspicious. Towards the end, I was kinda hoping the main would die...like...yeah...and when the main and the female kissed, I skipped the page before that by accident, and got a huge shock. I skipped one page and they had declared their love for each other and kissed. Wooow, fast! (Though I was betting their relationship was more of the suspension bridge effect-since they're put in a life-or-death situation, with killings left and right, and some senses removed and all. In the end, it wasn't, though.)

Overall, you can read it if you have time to kill and no other manga on your hands. It's semi-interesting semi-not there yet.
Was this comment useful?  Yes

Had Great Potential.
by KitsuneFX
March 31st, 2013, 10:00am
Rating: N/A
I don't know if it's with the translation or with the manga itself, but I the story quite confusing and turbulent. There were a lot of plot holes along the way. There were also parts that I think the author forgot to explain. For example, (I repeat, it may be due to bad translation) it wasn't explained well that drawing "Spirit" from the dice roll eliminates all the previous accumulated restraints. I had to find that out as the story went on. It was also not well-explained as to why Shirakogawa was not disqualified after stabbing the main character. I thought infrared cameras were installed. That part was majorly confusing.

The pacing of the story was also too hurried. The author didn't take the story slowly when he should have either to further explain some things or set up the mood. As what 1Love said, the author failed to build up the tension and effectively make an impact as any other psychological manga should.

All aboard for a roller coaster ride
by lee_sona
December 29th, 2012, 9:55am
Rating: 10.0  / 10.0
After reading I must say that this manga continues with the emotional ups and downs through and through until the close of the story. The plot also keeps the reader guessing what will be next.

Spoiler (mouse over to view)
The manga concludes nicely with a definitive ending not to disappoint those who want a happy ending.

Read till End to comment
by Great
December 9th, 2012, 10:01pm
Rating: 9.0  / 10.0
Yeah, I just have to read it till the end before giving any comment.
Actually, this is the first comment for Manga that I give in the mangaupdates.com
Anyway, back to the manga itself, at the few first chapter, I even think this is a dark funny manga because of some of the wacky character. But going along near the end, this manga give me a roller coaster feeling. Going up, going down, circling around, etc.
And the most impact is the last two chapter really makes my heart beating faster and then even skip a few beat maybe. Thats because
Spoiler (mouse over to view)
I want a happy ending and yet so afraid if its gonna get bad or worse ending
Was this comment useful?  Yes

It takes a while...but eventually I liked it
by dedude
May 12th, 2012, 10:39am
Rating: N/A
The previous reviews say the mangaka didn't set the stage well in terms of tension and suspense. I agree, in the beginning the manga was a bit lacking in that area and the story centered on a positive, happy main character. But that's like only the first 5 chapters. I'm up to chapter 10 and very rarely does a manga make my heart beat as fast as this one. At this point the main character has seen enough bullshit in the game to throw away his happy-go-lucky attitude and from then on the manga takes on a more dark and twisted atmosphere.

So yeah I like it. Don't give up on this manga just because it starts out weak.
Was this comment useful?  Yes

I Like It!!
by oneswtgrl
March 17th, 2012, 4:34pm
Rating: N/A
It's funny to read, and I like wacky characters like these..makes it more interesting than reading same storylines like shoujo romance that are typical. Although, if this was to happen in real life, lol count me out, but give me the money!!
Was this comment useful?  Yes