Login to add items to your list, keep track of your progress, and rate series!
Description
Takeuchi Sachiko's Honey & Honey is a realistic look at an adult lesbian couple living in Japan; to be precise, it's autobiographical. The artwork is rough, but hopefully the plot (and the information the manga imparts) will be enough compensation for those who don't like that style of drawing. The first chapter introduces the two main characters, Sachiko and Masako, and depicts their first meeting. 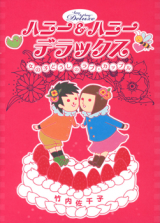 Slight misunderstanding below in comments?
by Iandaprix
March 25th, 2021, 1:56am
Rating: N/A
It seems from a comment below, there is some concern that the author isn't respectful of transgendered people. I think the commenter below believed that the author considers male-to-female people in the lesbian community to be male (based on some text in chapter 1 page 12). However, upon reading further that might be a contextual misunderstanding, maybe lost in translation.

Whether it's male-to-female or female-to-male is unspecified, but I think by context the author is referring to trans men. She is saying that female-to-male people are considered men by the lesbian world. She treats the subject in a very measured and accurate manner throughout the whole work, and there are no trans women featured at all in the whole book (but plenty of trans men), so I think my interpretation is correct. Although it's probably too late to change any hard feelings from the past, I hope people don't overlook this great manga because of the comments.

"transsexuals are seen as men in the bian world"

And though I understand that the views of the mangaka do not represent all of the LGBT+ community, LGBT+ solidarity means doing the T part justice as well.
Was this comment useful?  Yes

The best and most dignified portrait of homosexuality i ever saw in a manga
by residentgrigo
January 20th, 2015, 8:08am
Rating: 8.5  / 10.0
Japanese media usually fails me in the presentation of meaningful homosexuality but rarely a manga with such tags succeed to capture my attention. A lot of these are good in therms of narrative quality and not realism but this one did both ! The story is about two women and even if chapters are about the reality of living a (public) homosexual life in modern japan the focus is the slice of life aspect. This is a story about love and life first and not a about representing something or someone but the biographical and educational aspect are still top notch.
Some may have problems with the art style but i don´t. It looks very independent and while it doesn´t quite befit a japanese publication connoisseurs of international comics should dig it. While this is the highest rating i have given to story with one of the 4 "gay tags" on display or to a manga about LGBT themes i won´t go higher as superior international offerings like Alison Bechdel´s (yes that one) comic Fun Home: A Family Tragicomic exist and are the bar to be measured against. Let´s not forget Kevin Keller from Archie Comics while i am at it. Him i love too.

Educational: ★★★★ - solely educational/ highly instructive
The manga managed to teach me for example how the in japan officially nonexistent gay marriage can still "technically" be achieved, how gay pride is preceved by society and how it is executed. Furter how the transgender community in japan functions and last but not least what one can buy on amazon. Hint hint it´s sex toys but this is a good subject to adress in light of what the manga is about and this newfound knowledge even amused my co-workers to endless degrees when we looked up such reviews on amazon at work but i am getting off track.
All in all every question i had about homosexuality in japan was answered to my full satisfaction and i had the feeling that i understood what makes the author tick and what made her write this award winning biography.
Recommended to every international reader over the age of 12. Could someone please translate her other (biographical)manga as i feel that we are getting robbed of something meaningful and rare.

Ohhhh...
by YummiMookies
July 25th, 2011, 1:09am
Rating: 9.0  / 10.0
Fantastically cute and funny.
I also learned some new stuff reading this, too! -laughes-
The art is adorable and I like how she tells these anecdotes and stories that tie in with each particular theme.
Was this comment useful?  Yes

Cute n funny,better than plica
by BimboSilly
July 1st, 2008, 9:54pm
Rating: 10.0  / 10.0
When the first chapter was released, I was like wat horrible art but then, I noticed the daily humour in it. I now thnk the art suits the humour n lightness of the manga as well as giving an real view of adult lesbian couple, one of my fave yuri series

..It also clarifies a lot of things as well as make me nod in agreement..
Was this comment useful?  Yes

Sweet, adorable and sublime
by VampireBanana
May 23rd, 2008, 12:25pm
Rating: 10.0  / 10.0
Sweet, adorable and sublime. This is truly worth a read and heck... it's refreshing and interesting, compared to quite a bit of shoujo-ai/yuri I've encountered which're often chock full of stereotypes and obviously have been written by and intended for straight males/females. Stereotypes like how all lesbians are man-haters and must have been raped or treated poorly by males so they turned to females. Or how all straight males are brainless buffoons. Or how all best friends must turn gay and so forth. Thank goodness Honey & Honey is short on that and full of slice of life humor and lovin'.

The art may or may not be your style but I find it adds to the experience and style than detract from it. After all, I'm not sure how stylish and distinctive Honey & Honey would have been if it was full of shoujo sparklies and typical screentones.

It's always fun to find something interesting once in a while. And this is it.
Was this comment useful?  Yes