Login to add items to your list, keep track of your progress, and rate series!
Description
1) Ijimetaihodo Aishiteru
Takashi has been bullying Haruki since they were children. But he's an idiot, and Haruki always manipulates him. Will these two ever sort out their feelings for each other?

2) The Fox's Wedding
The Fox's Wedding- Tohru has just quit his job, broken up with his fiancee and moved back home. And it's all because of his supervisor, Hanao! But Hanao is more than he appears to be...

3) Foreign Culture Communication
A historical story! Commodore "Just call me Darling," is new to Japan and is given a young, beautiful and incredibly naive translator named Haneda Takayuki. Da... More...
1) Ijimetaihodo Aishiteru
Takashi has been bullying Haruki since they were children. But he's an idiot, and Haruki always manipulates him. Will these two ever sort out their feelings for each other?

2) The Fox's Wedding
The Fox's Wedding- Tohru has just quit his job, broken up with his fiancee and moved back home. And it's all because of his supervisor, Hanao! But Hanao is more than he appears to be...

3) Foreign Culture Communication
A historical story! Commodore "Just call me Darling," is new to Japan and is given a young, beautiful and incredibly naive translator named Haneda Takayuki. Darling is smitten with his "Honey", but will the culture differences be too much for them?

4) Little Lost Lamb
Kamiya Inoru's parents run a church and he helps out by listening to confessions. When classmate Shiba Youichi comes in and confesses that he's in love with his classmate, Kamiya, the priest substitute can't resist seeing how far Shiba will go for forgiveness...

5) Educational Affection
Student Ogawa has changed lately since his father remarried and he aquired a new stepbrother. Both basketball team coach Koga and school doctor Takamura are concerned about his home life, but when they find out what Ogawa's brother's been up to will Koga be able to keep his cool? Less... 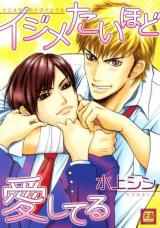 I like this manga
by WhiteIsBlack
March 3rd, 2020, 10:17pm
Rating: 8.0  / 10.0
The first chapter is hilarious and good. I think Takahashi rather teases Haruki than really bulling him, though teasing is part of bullying. I really like the ending and short extra where it turned reverse.
The second story was nice but because it’s my least favorite doesn’t mean it’s bad. I have words to describe it.
The third is sweet and wonderful. The couple calling each other lovey doves and affectionate names are sweet like they’re a couple.
The fourth has a theme, that is one of the seven deadly sins. Omg, using Virgin Mary statue as a toy is too much.
The last is something I knew before the revelation was true. I knew that the doctor was the stepbrother. Koga is such a sweet guy and caring for Ogawa.
I’m glad this manga is one of the only made by this author to have light toned theme with funny moments.

Hilarious!
by 801crazed
June 12th, 2015, 11:45pm
Rating: 8.0  / 10.0
the stories each had their weird and wtf moments but they were overalll pretty funny and cracky.
My favourite was probably the first one though, it was cute too.
Was this comment useful?  Yes

It's like a variety show, with emphasis on variety.
by LikaLaruku
February 28th, 2014, 11:24pm
Rating: 9.0  / 10.0
Ijimetaihodo Aishiteru: The childish Takahashi fancies himself to be a bully. Mom-like Haruki sees right through him & doesn't take him seriously. They have quietly developed a mutual crush on eachother, & when Takahashi sacrifices his health to save Haruki from a fall, the sexual tension between them grows & Haruki finally decides to indulge Takahashi's whimsy.
--------------------------------
The Fox's Wedding: Touru plans to marry the PR manager's daughter for a set life & to get over his gay crush on his boss, but his engagement is cut short when he's reminded of his childhood vow to marry a beauty from the Fox Clan. This story may be connected to another Mizukami manga called Kudan no Kuroneko.
--------------------------------
Foreign Culture Communication: An emassary from the west becomes smitten with a naive Japanese youth interested in learning about western culture. Seems to be inspired by "Sign of a World's Love" chapter from an older Shin Mizukami manga; Hagakure no Koi. Going by the fashion, it's early 19th century.
--------------------------------
Little Lost Lamb: It's a lot like a couple doing fantasy roleplay in priest/nun lingerie; an exhibitionist student meets a voyeuristic priest in the confessional every day after school. The taboo element makes it extra sexy while the sacrilege adds humor; never again will you hear "allow god to enter" without chuckling. The story also serves as an exquisite FU to various religions' intolerance of homosexuals, masturbation-shaming, & lust-shaming.

Responses to previous commentors.
1) DON'T skip the last chapter; there's nothing wrong with it.
2) I'm probably older than Yankee-chan & it suited my tastes just fine.

Not my cup of tea.
by Yankee-chan
October 31st, 2013, 7:18am
Rating: 6.0  / 10.0
Aside from the character design, that came up with overly cute characters, that had for my taste too many feminine aspects, the western-historical just put me off. It's a personal thing, so if you are okay with that, then the drawing style can probably be likeable. However -

The stories haven't been much better. The first one was okay, but the others just somehow have been over the top and unrealistic. As a mature reader there isn't much to say about them, aside from the feel, that the overly phyisical scenes and stereotyped smut scenes are probably to feed the taste of a younger audience. Maybe ... Lol.
Was this comment useful?  Yes

Chapter 4 made no sense XD Either the mangaka knows nothing about the Catholic Church or she has a weird sense of humor. The priest dad? and the nun mom? go out and leave their son? behind to take confessions?? XD What is that church? Like a bakery or something? Leaving their son taking care of the register? It was so unrealistic I just couldn't stop laughing all trough the chapter XD
It's not the first story from her that's weird in many ways, but maybe a less unreal scenario would have worked better on this chapter.
She really doesn't like Christianity 8X So anyone that has a problem or could feel offended by this type of subject should skip chapter 4.

SKIP the LAST story
by Euridice
April 24th, 2012, 1:15am
Rating: 9.0  / 10.0
over all this one is also a good read, as expected from mizukami sensei there is comedy, romance , and tears. very tasty indeed although they're just short manga but its still worth reading. but the last story is not that good, i don't even bother to read it twice i can't seem to find the excitement from the last story, its like its lacking something....
Was this comment useful?  Yes

Some of this is really good, some just not...
by streetwalker
October 23rd, 2011, 4:35pm
Rating: 9.0  / 10.0
I really like Mizukami Shin, she has original stories and he humor and smut at their best are some of her strong points too. The art is great as well and that goes for this book too. Plot-wise I liked the first three stories.The uke in the first one was delightful! It's nice to see something a bit different for a change... And the third story was so funny and really just heart-warming.. Commodore "Just call me Darling" - Priceless!

The rest, however, I had some issues with. The catholic church is nothing like it is portrayed here and, though I'm not a very religious person myself, I found this religion sex fantasy cheap and lame. The last story was also kinda awful. I just found the characters not at all sympathetic. It wasn't all bad but just left like a bit of a sour taste in my mouth. The first three were so great though that this still earns 9 points from me.

Mizukami-sensei is amazing as always!
by nekoshotachan
October 19th, 2011, 9:46am
Rating: N/A
I literally read ever manga by Mizukami-Sensei at least 10 times.Mizukami-Sensei's work is always amazing and her style is really beautiful. She is one my favorite sensei list for sure.
Was this comment useful?  Yes