Login to add items to your list, keep track of your progress, and rate series!
Description
From Intercross & Shoujo Crusade:

Daisuki Datta yo, Sensei...
A girl whom experienced unsuccessful "threads" of love with her teacher, encounters her fated person!?
A very kind, dramatic love!

Ushiro kara Niban-me no Kanojo
Yumi loves Sakura and her crush happens to be friends with a guy called Sakura! She only eyes for her sempai, not Sakura, but this changes when she was caught watching Sakura getting slapped by a girl and he called her a peeping tom. He even told her that she "should give up" on her crush, what does he mean by that...?

Daisuki Datta yo, Sensei...
A girl whom experienced unsuccessful "threads" of love with her teacher, encounters her fated person!?
A very kind, dramatic love!

Ushiro kara Niban-me no Kanojo
Yumi loves Sakura and her crush happens to be friends with a guy called Sakura! She only eyes for her sempai, not Sakura, but this changes when she was caught watching Sakura getting slapped by a girl and he called her a peeping tom. He even told her that she "should give up" on her crush, what does he mean by that...?

Toraware Beast (Captured Beast)
Gotou Shiori is known as the 'perfect lady' and looks 'experienced'. The truth is, she isn't as 'perfect' or 'experienced' as it seems! She has never had a boyfriend and is a major Otaku! One day she's at a bookshop and the creepy Otaku, Megumu Kajo, finds out her secret. To make sure he doesn't tell anyone that she is an Otaku too, she has to join the Drama Club. Less... 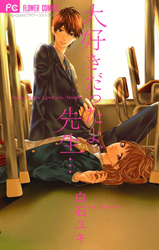 Quite Decent for a Teacher x Student Plot
by shi suisen
April 24th, 2017, 9:39am
Rating: 8.0  / 10.0
A teacher x student plot is one of the things I dislike but I still decided to give this manga a try. Personally, the plot was carried out rather well in this case; nothing too over the top and actually a much more realistic solution towards the whole forbidden teacher and student relationship plot.

Decent as it may be, the story still has a number of unrealistic points, such as his initial advances towards her (in the real world, when a male stranger waited for you at the bus stop all day long just for you to show up, that's not sweet or cute, it's downright creepy); and when he so quickly confessed that he loves her (that's way too reckless and thoughtless even for an adult). I suppose the quick pacing for the above points were due to the fact that this manga consists of two chapters only, so the plot has to move on a bit quickly.

Despite some of its bad points, it's still a rather sweet story and it's worth a try. The fact that the guy isn't a cold jerk nor the girl some annoying typical shoujo MC is already a plus point.

Just read it if you like the mangaka's art
by happygem
October 11th, 2015, 8:44pm
Rating: 7.5  / 10.0
Okay, so the story flowed well, but wao there is very little chance anything the guy did here will happen in reality, I love the art, fan of the mangaka, but the story was what the heck =.= all the way~
Was this comment useful?  Yes

blarghhhhhhhhhhhhh melodramatic w/o reason and w/o emotion or feeling
by sakuraraine
April 21st, 2015, 12:29am
Rating: 7.0  / 10.0
USUALLY I like melodramas. USUALLY I am pretty lenient on dramas / romances / shoujo ratings and reviews, and even student-teacher relationships which I tend to not like very much. They're my least favorite type of relationship. So I picked up this one because it had pretty stellar reviews, especially for a oneshot. But right from the start, I had this queasy feeling in my stomach that it was going to be super cliche and melodramatic, and I was right.

But this one was weird! It was super melodramatic, without making me feel like any of the characters were real or making me as a reader feel anything. Sure, it got more sweet towards the end, but I still couldn't shake the fact that the guy was super weird. Both characters suddenly, immediately fell in love with each other, but I didn't fall in love with any of the characters, and I didn't ship them at all. That's a no-no for me. The art is pretty, the storyline, although rushed, isn't bad. Usually I'd get a fluttery feeling in my chest if I read a manga about a cute mysterious stranger waiting for a girl in a bus stop. But no, the whole romantic feelings were killed by the characters' random dramaticness. It was just so unrealistic! I found myself going "WTF" over and over and over (not just once).

Sure, if it were longer, and if the guy wouldn't stop declaring his love for the girl right after he saw her for the first time ever, and then over and over after that at random times, maybe I'd think it was good. But the mangaka would have to scrap most of the panels and insert pages and pages of character and relationship development. I want to see the characters truly fall in love with each other, not just become moved by each other's declarations of love.

Unrealistic
by piranha
January 16th, 2015, 4:53pm
Rating: N/A
The characters are melodramatic and unrealistic. One guy, after seeing a girl for a few seconds, tells her the next time they meet that 'I couldn't forget about you all day long', like who says that to someone they don't even know the name of? And she wasn't even smiling or flirting at him!

The kicker is that he tells her
Spoiler (mouse over to view)
I really love you
the third freaking time he sees her!

And then BOOM
Spoiler (mouse over to view)
After her teacher who she was involved with got fired for being with her, the SECOND guy, who told her 'i really love you', turns out to be her NEXT teacher!
OMG ALL THE MELODRAMATIC CLICHENESS IS KILLING ME! DO NOT READ!

Probably the best romance in any shoujo ever
by Nirachu
October 9th, 2013, 12:36am
Rating: 8.0  / 10.0
Perfect pacing, beautiful characterisation, delicate artwork are all factors that make this manga great. However, what makes this manga truly marvelous is the portrayal of the two main leads. It's not often that you find such a strong, mature female lead and a kind, endearing male lead. The relationship that unfolds is really beautiful.
Was this comment useful?  Yes

Spoiler (mouse over to view)
I thought it will be another typical Student-teacher relationship where the girl fights for their relationship but no. This isn't one.Ito decided to choose the right choice. She ended it with Nakamura-Sensei resulting for her to bloom.The ending didn't disappoint...

I'll give this a 9 since I wish there was more

But all in all I really love this
Was this comment useful?  Yes

Melodramatic! But very sweet.
by BronteFan
November 28th, 2012, 11:28am
Rating: 8.0  / 10.0
Beautiful art, likeable characters, & decent, though cliche, plot, but it struck me as so melodramatic! There were several places in the manga where I was laughing when I wasn't supposed to. Of course, most manga in the "drama & romance" genre are quite melodramatic...Anyway, I still liked it. The most distinguishing thing about it is how gentle and caring the male lead is.

It's really adorable
by Saefiya
September 15th, 2012, 9:35pm
Rating: N/A
I think this was done perfectly and most realistically as a teacherxstudent romance. Most of the manga I've read, they continue to date secretly or the teacher just outright rejects the student at some point. But this was just too cute for words.

Oh and I really enjoyed the fact that it was the teacher who fell for her first (even if it was quick, it's sweet) and that they didn't see each other first in a school setting. But I don't see it as a love at first sight kind of thing, more of the 'I want to know more about you to see how I really feel' kind of deal.
Was this comment useful?  Yes

Too awesome!!!
by athinyuni89
August 7th, 2012, 11:18pm
Rating: N/A
I love this story, definitely one of the best student teacher story. I love the drawing (shiraishi sensei is awesome ^_*v), the plot is not cliche', male lead not a jerk but very sweet kind hearted man and female lead is a strong, beautiful girl with beautiful hair...

I give this best shot 10/10 for drawing and plot...v
Was this comment useful?  Yes

Really good
by Strobe
April 22nd, 2012, 9:12am
Rating: N/A
Although it was a while since I read it, I can still remembers that it was really good. The feelings really reaches the audience and the ending is very sweet. This is a must read for romance lovers. I am also a fan of studentxteacher mangas. Forbidden love in modern time. ^^ And also, the art is good.
Was this comment useful?  Yes