Login to add items to your list, keep track of your progress, and rate series!
Description
Gag manga about Kou, a young "elite" man, who has a policy of not being in debt to anyone. But he ends up owing his life to a strange girl who saves him. Nino, the girl who claims she's from Venus and lives under the bridge by the Arakawa river, demands that Kou become her lover. So the young man ends up living there too. 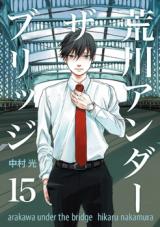 Meh.
by likalaruku1
June 7th, 2017, 11:06pm
Rating: N/A
It seemed interesting, & I was looking for a comedy, but after reading 1/4 of the first volume without so much as a single chuckle, I knew I wasn't going to get very far with this. Also, the female protagonist looks like a crossdresser, specifically Illumi from Hunter x Hunter with bleached hair.
Was this comment useful?  Yes

Nice, but Hard to read...?
by MelReinH
July 12th, 2013, 2:12pm
Rating: N/A
Getting into the manga was kind of hard. It's a gag manga, and I love them a lot (cuz they're so funny xD), but for some reason, I can't read much of this. I did good and read up to, like, chapter 200. The really interesting parts are... well... when it seems to show a "significant plot-line". Even then, the plot lasted like 3-4 chapters. Every other time, it's just random gag here, random gag there.

Lackluster
by blackmokona
July 27th, 2012, 12:01pm
Rating: 6.0  / 10.0
After Kou settles in, this manga lost all sense of direction. Just, I am not that hung up on plot, but a general something would be nice. It banks too much on readers falling in love with the characters, and I'm feeling nada for Kou and Nino. Their individual antics are cute, but after the first scenes, they have little chemistry together. Other characters had to be in there for them to shine. I enjoyed the wackiness for a while but it just keeps getting weirder. Jesus, work with the characters you already have, don't bring so many new ones into the cast. That really detracts from who readers may already love and the new ones smack of trying too hard anyway.
Was this comment useful?  Yes

Hillarious and Wacky
by cherrykookie
July 10th, 2011, 1:33am
Rating: 8.8  / 10.0
This is over the top crazy and freaking hilarious.
However, it lacks plot and mostly consists of comedy. The romance, the only hope of a plot, is very slow paced but adorable. The main couple is hilarious due to their clueless and naive (weird) personalities.

This is great for killing time and a good laugh, but if you're looking for something with a plot or don't like over the top nonsense humor then this probably isn't for you.
Was this comment useful?  Yes

80 percent funny, 20 percent heart
by Hell_Clues
May 24th, 2011, 5:38am
Rating: 8.5  / 10.0
Some super duper high society type is usually what women in shoujo manga want. In this manga though, all of that is stripped away. Such a character willfully abandons it all because a woman he has a compulsion to pay back wants him to. Leaving only these two people at their barest.

But it's okay cause its a funny manga right. I just wanted to point out that interesting set up. Usually people hate the whole average guy thing nowadays but the reason its important in the first place is because men like the idea of a women not using outside peripheral stuff like money or whatever to make her choice.

This manga manages to do that while using a guy that was born rich, earned it anyway, so he proved himself but still has nothing and the girl doesn't want that from him.

Well I've managed to not talk about the what most people will probably like about this manga. Which is the humour. It's funny, crazy, but still grounded to some extent. By that I mean the kappa character is just a guy in a suit ect. I think I've done a horrible job of getting people interested in this manga but it's really worth trying, check it out.

what the...?
by turnip head
April 3rd, 2011, 5:07am
Rating: 9.0  / 10.0
high iq? i really enjoy this story- does the fact that i liked it mean i'm unintelligent? hm. and because i enjoyed it i have low 'EQ'. i'm not going to even touch that one except to say insulting those who've enjoyed something you hadn't is ridiculous.

it *is* absurd. the story is about a pant-less man saved by a self-proclaimed Venusian living under a bridge. 'nough said. if you can stick with it, there are layers here- the only way a story with such an outrageous premise could do well in the seinen section.

:)
by x91
December 22nd, 2010, 4:30am
Rating: 8.0  / 10.0
There's a line between the lack of common sense and utter stupidity, and I don't exactly know if this series actually crosses into the latter at times haha. It is not as funny as other gag series such as Gintama but I enjoy it nonetheless.

I especially appreciate the managaka's philosophical viewpoint on modern society and human culture, and how she puts it into context using these oddball characters. They are original and interesting in their own way, and they work well together to form a lovable cast that keeps you smiling and/or laughing out loud when you read.

I recommend this series to anyone who can handle utter randomness and absurdness with a splash of humour. Oh, and not having any common sense would also help!
Was this comment useful?  Yes

cant read this while being serious
by cobalt_rain
November 12th, 2010, 10:05pm
Rating: 10.0  / 10.0
this is a total feel good gag manga with likable character an interesting and funny plot, and a cute romance.
you begin to love everyone under the bridge
this isn't some story thats really deep or that you can put under a microscope but for what it is
arakawa under the bridge is genius
Was this comment useful?  Yes

Common sense!
by greyeagle
September 13th, 2010, 3:02am
Rating: N/A
I often wonder why some people so easily accept the "common sense" that is set up by society. They hold tight to that common sense like it's their lifeline (so it looks like they wont be much different from others) then, from that position, all of them, holding tight to the rope, they laugh at people who would not live by society standards - in other words, "People without common sense".

Seems like they are the ones that are without a self to me. They are all afraid of losing their shape once their common sense is lost. Why dont they create their true selves in the first place?

Personally I admire those without common sense, those that always question why they have to go by rules of others. And this manga totally beats up the common sense that I really hate. So, it's a 10, it keeps me laughing all the way. Go, amazingly bravery characters!