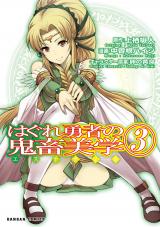 Story needs time to develop
by MitsukiKanou
February 18th, 2015, 12:38pm
Rating: N/A
I've read the translated light novels. The story only picked up and showed the depth of the characters after the revelations in volume 5. This is common in the fantasy genre that needs time for world building and time to slowly build backstory. Seriously, I think the anime was only the beginning arc of the story (LN volumes 1-3). Its no surprise that the manga that barely covers volume 1 cannot show enough depth.

I estimate that around a hundred chapters from now, will we see that there are several enemies, much more powerful than the MC. Call them level 100. However, in the genre of battle mangas, the author needs to show enemies one level at a time. If the MC immediately triumphs over the strongest person in the world, that wouldn't be fun. The story will end quickly! We wouldn't be able to savor the battles with mid-level characters, at level 30 or 50.

If you're sick of useless male MCs (common in harem and shounen romance), Akatsuki is a refreshing male lead. Like Keima of World God Only Knows, he truly cares for the girls and knows how to handle a harem. Like Issei of Highschool DxD, he is perverted, but can always be relied upon to save the world and the girls he loves.

I repeat, this is NOT a Gary Stu or pointlessly overpowered MC. The story simply starts at the midpoint, after he has already overcome powerlessness. I think the story's true theme is exploring what it means to be a true hero. In Akitsuki's actions, attitude, and principles (aesthetics), he'll demonstrate that.
Was this comment useful?  Yes

What I have seen of it
by ravensdark
October 21st, 2012, 4:29pm
Rating: N/A
This manga is a problem. The anime came out and I watched it and found it to be one of the best of the season. Unfortunately I have not read the manga seeing as only a small portion has been translated. The same goes for the LtNovel. What is available I have read but it is not much.

My comments. Most shows/mangas/stories/ect... that rely on large amounts of fan service to attract their audience tend to lack any real sort of storyline. While the main story does not seem to be very deep and the characters seem standard, there is a striking difference.

Most stories that attempt to mesh together multiple plot angles to flesh out the potential as well as extending the life of the story tend to seem very forced and they often will grate on my nerves. I just do not like it when an author tries to add in several opposing plots to a story, this usually ends up creating plot holes as well as contradictions that never get resolved.

This story on the other hand started out by doing it. It was written from the beginning to be several supposedly contradictory and opposing plots meshed together to start with. In doing it this way the story was fleshed out and because it was used from the first it turned out not to have all the contradictions that normally appear. Overall the anime was very well done and I am assuming that the manga and LtNovel were even better. I certainly would like to read them both and will be waiting for them.
Was this comment useful?  Yes

Anime was excellent!
by ChocoKun
September 24th, 2012, 12:59pm
Rating: 10.0  / 10.0
If u like super oped male leads in anime such as Kaze no Stigma, Legend of the Legendary Heroes, etc, then u will definitely like Hagure Yuusha. The main male lead is insanely strong and never breaks a sweat! Recommended 100% ;D
Was this comment useful?  Yes

As of Ch2, the Story makes no sense
by emkat
August 7th, 2012, 9:03pm
Rating: N/A
The translation is bad, and the story is convoluted, so you really have no idea what is going on. I can't really rate it, but I would say it's not worth reading. Maybe it will improve, but even the art is pretty sloppy with overindulgent fanservice.
Was this comment useful?  Yes