Login to add items to your list, keep track of your progress, and rate series!
Description
Fuwa Rito is an otaku wasting his time in a gal game appreciation circle. Ruri is a childhood friend who has a crush on him and is worried about his otaku ways. Trying to find out who he likes, she setups a group dating between her friends and the guys of this circle in a Maid Cafe. What she doesn't know is that certain big chested maid is about to enter the game! 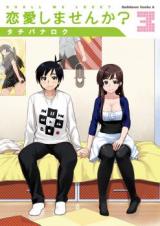 Not worth your time (probably)
by Hokkaidochai
October 30th, 2020, 7:18am
Rating: 5.0  / 10.0
This is a series which has an above 7 rating on this site and is viewed as an underrated work in reddit. I strongly disagree with the sentiment. It doesn't deserve any more attention than it has gotten. I admit, I haven't read that many manga(s) to confidently say that it's worse than most but I can say that it's certainly not one of the better reads out there.

If I had to summarize this series in one word it would be: 'pointless'. The MC is as bland as it gets, almost like the writer made him this bland on purpose. He does nothing to make you interested or invested in him, although in his backstory he makes a better impression. The series is held together for the most part by Ruri, his one-sided lover, and Fuwari, just because she's cute. The manager of the cafe she works in is a fun character too. I wish we could've seen more of her rather than the MC who just "exists" in the situation for the most part.

I guess I'm being too harsh with this work. The art is pretty good and there are no cheesy harem tropes which is a plus, but I have to say that the author wasted a lot of potential here. Throughout the first volume I kept thinking that it could redeem itself and the MC, and it truly could have, but it just fell flat in the second half. The main crux of this series, the backstory of Fuwari is shallow and overemphasized. It doesn't really feel all that important and deep. That's why I made an account to write all this, because I'm bothered by all those 8 and 9 (and 10) star reviews which misled me into getting my hopes up for something like this. Do read this if you have nothing else to do and just want some guilty pleasure, but it's probably not going to be worth it if you're this work's target audience (Seinen).
Was this comment useful?  Yes

Enjoyable but fairly unoriginal
by Theoneyedsnake
August 22nd, 2020, 3:04pm
Rating: 6.0  / 10.0
The manga as a whole was enjoyable. The art was decent, the characters weren’t bland, but the plot is just plain unoriginal.

Right off from the first chapter you just know who the main character picks. Like in almost every trope and stereotype, it’s almost always the new girl.
Was this comment useful?  Yes

Good story i liked it
by Reicochizuru
April 19th, 2020, 8:28am
Rating: 10.0  / 10.0
I am happy with the plot and a lovely ending but felt a somewhat a itch in heart for ruri her love for true for fuwa but all knows love is always complicated and full of hardships i am a great fan of this author his other work "mata kataomou" was the first one i read and this manga was my 2nd there i hope to see more works of tachibana roku good luck
Was this comment useful?  Yes

Worth reading
by jjm152
September 1st, 2016, 7:00am
Rating: 8.0  / 10.0
This is one of my favorite short romance titles. The artwork is wonderful, the characters are fun and engaging and the plot moves along at a brisk pace without any filler. Although there is some drama and a minor love triangle, it's not over done and the story is mostly about a pair of people coming to grips with their shared past and a hopeful future together.

It's sweet, well done and about the perfect length.
Was this comment useful?  Yes

It's fine I guess...
by plotrobert
April 29th, 2016, 12:52pm
Rating: 7.5  / 10.0
So I do think that this is above average overall, but there's a couple of glaring problems with the story. One of the biggest issues is, I know why the maid chick likes Fuwa but they don't set up a reason for him to like her other than "she has big tits". It just feels like they could have tried harder to establish an actual relationship between the two. I don't think they even had a legit conversation the entire time. Fuwa and Ruri had much better chemistry but I guess screw that since she doesn't have a huge rack I guess. They also rub that fact in her face constantly, by the end of the story I just felt bad for Ruri. She deserved better. It just feels like the author wanted us to feel this love between the main two leads but forgot to have them actually connect as people, it leaves you feeling that their love is just surface level.

The whole story could have just been done so much better. For example most of the side characters are practically useless. I don't know why stories like this have to completely ignore the other male characters, I was kind of hoping they would at least throw them a bone since they have the setup of a dating meetup.

Most Excellent Art and an Appropriately Short Plot
by DoujinHunter
September 20th, 2015, 8:20pm
Rating: 8.0  / 10.0
The high point of this series is by far the art, which is gorgeously sexy whenever it depicts the lead girls. Otherwise, it's very pedestrian in terms of plot (will they or won't they?), characters (tsundere loli, clumsy large proportioned woman, the crazy lesbian, the clueless guy), and themes (expressing love). The best thing to say about it is that it is very short for this type of series, which is good since it doesn't overstay its welcome and bad because it doesn't have an epilogue. The series made reference to the passage of time but the relative lack of content made those statements much less impactful when characters discussed the long time they had spent with each other towards the end.
Was this comment useful?  Yes

A semi-good misdirection piled on by industry cliches
by Lightbrand
April 6th, 2014, 2:01am
Rating: N/A
The author is clearly capable as he managed to pull off a deception one would not have ever expected a story of this caliber to have.

The basic premise is nothing but a yawn fest, but this little "twist", or rather "untwist" at the half way point of the story made the sole reason of reading this manga semi worth it (it's goes back to crap after the reveal, but at least it ended soon after.)

I'm surprised that nobody mentioned this little misdirection used by the mangaka, I can't be the only one to appreciate it in an otherwise horribly bland story.
Was this comment useful?  Yes

so abrupt
by bookawkee!
January 6th, 2014, 8:27am
Rating: N/A
The pacing was quite nice.the artwork suited the story well and the way the mangaka works each panel is very well done.the characters have more depth than I tjought they would have. (Well,everyone except the 2 male friends.) It couldve gone for at least a little bit more but it still ended in a good place.
Was this comment useful?  Yes

This could have gone on longer.
by JackGrover
October 11th, 2013, 4:21am
Rating: 8.0  / 10.0
This story could have actually gone on longer and still kept its appeal. There were times I was a little dissapointed with the drawings, but the story had some really good moments. It also had some cliche' moments, but that's why we like these "harem" style manga, right? It's a good story with a good back story. The back story could be expanded a little more but it worked well with this short 15 chapter story. I hope the mangaka will continue to develop these characters and I look forward to their future works.
Was this comment useful?  Yes

well, i'm same as hexogen
by reivatin
March 17th, 2013, 4:38am
Rating: 8.0  / 10.0
this not like good for nothing MC who got hooked coz he's lucky
there's a past who turn the table here, and that's why he become you said "idiot" when it come to girl
and yes, love triangle cannot consider as harem because from the start the MC have set their eyes on one heroine

give this manga more suitable review, with more chapter to read...