Login to add items to your list, keep track of your progress, and rate series!
Description
Eripha is the only girl in the garrison of the World Government's army that is protecting the city of Eldorado from terrorists. After being stationed there for three months she finally warms up to a boy in the same troop, Melka Dracea. But a sudden raid from the terrorists and a close encounter with the their leader changes their situation, drastically. 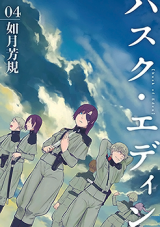 Note: You must be logged in to update information on this page.
Forum Posts Click to view the forum
Do the Named chracter in the description die?
over 7 years ago

Yup it's great.
by poncow5
February 18th, 2019, 7:33pm
Rating: 6.0  / 10.0
But sadly it got axed, the ending left u wondering what the heck is happened. Random character suddenly appear at the last chapter, it's purely chaos.
Was this comment useful?  Yes

This is definitely a work that doesn't pull its punches, and I cannot think of a single manga in recently memory that has a death count quite like this one. Husk of Eden doesn't play it safe; in fact, it plays it patently unsafe, with the amount of well-developed characters being killed off. No one has plot armor in this work. The brutality of war leaves none untouched. Everyone is susceptible to death.

And the best part? The survivors actually feel the consequences. There is real, tangible grieving in this manga! Real mourning! People don't simply write off someone's death, nor do they simply cry a bit and then resolve for REVENGE or whatever plot device people are writing about these days. They actually suffer through the sadness and the pain of losing someone, of losing comrades they have learned to like and trust, of the fear of their own impending death, of the guilt of remaining alive.

This, my friends, is a manga that makes these deaths mean something. It makes the consequences of war, the horror of dying, so real that I cannot do anything but applaud.

This series is a true gem, and reading it is, undoubtedly, worth it.

edit: Well, so, uh, that ending happened. Unfortunately, it seems as if the mangaka ran out of steam near the end of this, and the final chapters are rushed not only storywise but also artwise. (There are pages upon pages with no background art, reminds me of Iwaaki's Historie magazine chapters, honestly.) I have no idea what real-life circumstance could've happened to lead to this, but it is slightly disappointing for a series that had such a strong beginning. Regardless, the early chapters are good enough that I don't regret reading this at all. I hope the author manages to come back to this someday, because I really would love to see how this series would've concluded if given the ability.

Darker than I thought
by miraclewisher113
July 31st, 2013, 9:27pm
Rating: 8.0  / 10.0
I didn't think the story would be so dark, but I guess when you have terrorists and soldiers, you would expect these sort of things. I can't say too much yet because there are currently only 5 chapters, but I think it's interesting. A bit graphic, but nothing too bad. The art is clean, and the plot is presented well. The only thing is that I was really confused about who the main protagonist because
Spoiler (mouse over to view)
many of the characters introduced suddenly die...

Promising
by chrum
February 28th, 2013, 12:43pm
Rating: 10.0  / 10.0
Can't say much after only 2 chapters, but so far it looks as if it's going to be very good. The art is beautiful - i love the way the author balances shades and clear white/black. The characters are natural, main lead seems reserved and mysterious but also in a believable way.
I only fear that it might in the future be going more into magic and mystery, the same way No.6 was ruined for me.
I would give it a try. Reeaally.