Login to add items to your list, keep track of your progress, and rate series!
Description
18 years ago, a powerful monument was discovered on a mysterious island. The monument contained data only certain people could extract – who became students of the island’s school. By being able to extract the data, the students are able to summon a creature that they fight with. Of these people, Satou Taketora is your typical lazy kid who doesn’t do anything, hence he’s ranked dead last. But one day, he’s dragged into a battle with his old childhood friend, and to everyone’s surprise… his summon is more than meets the eye… 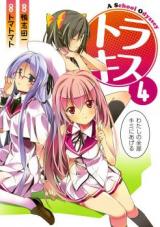 Generic yet confusing
by Sojiro888
September 20th, 2014, 3:31am
Rating: 4.0  / 10.0
Another cookie cutter harem with some action sprinkled on top, and yet it is still pretty confusing. Too many character that are introduced but not developed, too many plot thread that are dangled before being ignored, too many mysteries come to light never to be explained ...

The mangaka was apparently grasping at straws and not really sure where he wanted to go, which is too bad because the hero had a personality that had promises and the setting looked intriguing. Sadly, all these intriguing plot hooks never end up paying out, so the potential is wasted.
Was this comment useful?  Yes

A complete waste of time
by Lightbrand
July 22nd, 2014, 3:18pm
Rating: 9.0  / 10.0
This manga started out promising, a typical "fantasy high school" with battles and romance and what not. They threw in a lot of techno-jargons throughout the story where you'd expect them to explain what they means in the coming chapters. Well...not really.

It's really mind boggling what the author wanted to go with this, way too many characters were introduced and we barely got to know any of them, so why have so many? The main guy has 2 sidekick as friends whom we know nothing about, he also has a little sister who we never understood who she is (and why she has her feelings for her brother), then there are the few archtype girls who falls in love with our main guy because he best them in a duel, got a childhood friend who's the sister of another childhood friend who are both love interests. Then we got a bunch of school council people organizing a typical "inter-school competition" that never came to be.

If you want to label this story as generic then you certainly can, but this is no worse than Mahouka Koukou no Rettousei or any of the other harem school mangas. Instead we get a non-ending and have absolutely nothing explained. Main guy enters school to investigate what happened to his childhood friend, 20 chapters of filler, he finds her, he rescues her, end. No explanation as to who put her there or any of the greater evils still lurking about.

Goofy battle manga
by jeffreymgibson
March 14th, 2014, 5:45am
Rating: N/A
Just anothet goofy battle manga with a harem. Slapstick with loads of boobs and other fan service. Very silly and a complete lack of any depth. Would probably be better to read after its ended.
Was this comment useful?  Yes

it's just...
by Izhy
February 10th, 2014, 12:36pm
Rating: 7.8  / 10.0
Spoiler (mouse over to view)
the consequences of the duels..
maybe not all of the students challenge the others to duel? and i think, the rank doesn't have anything to do with the duels or how much they duels, because the teacher said his rank is still #3000 even after his win.
kind of reply for the other comment
hoping to see a good battle of his 'tora' (and maybe some 1st impression) is what keeps me reading this manga.
Was this comment useful?  Yes

This manga makes no sense!!!
by Kevadu
October 6th, 2013, 2:29am
Rating: N/A
I'm sorry, but this has been bugging me from the start. So this manga has characters who fight these duels and then the loser has to give their 'data' to the winner. This 'data' is exchanged by kissing. Whatever, it's manga so I can pretend to buy that. But the way these duels seem to work, win or lose there's going to be kissing at the end. It's just a question of which direction the data is going.

So how is it that every single girl in this manga seems to be kissing for the first time when the protagonist defeats them?! Even though they're supposedly already quite experienced at these battles? They ought to be used to it by now...

Look, manga authors can make up wacky settings all they want, but at least try to be *internally* consistent. It just shows you how poorly thought out the whole setting is...
Was this comment useful?  Yes

Not to hopeful
by Hanen
November 10th, 2012, 4:28am
Rating: 3.0  / 10.0
Opening developed too fast and characters are less than relatable to reality. Situations in the manga seem HIGHLY unlikely to occur in such a pubescent scenario or a high school situation. There is nothing wrong with the plot or the story, it is the way the story is being told that is the issue. Character emotions, and thoughts are too openly spoken making the characters seem to spontaneous. This manga has a lot of fan service worth only a passing glance.

Character design is lacking
by emkat
August 14th, 2012, 11:46am
Rating: N/A
The girl characters look too similar to each other. But the mascot looks pretty cool. This has potential as long as it doesn't get too cliche. The transfer of data seems like a way to provide fan service. But it seems to be worth reading if you're into the magic school type of story.
Was this comment useful?  Yes

Cliche BUT...!
by MatrixM
July 7th, 2012, 11:49pm
Rating: N/A
The main character in this is sooo good so far xD. I just hope he doesn't break character.
All the other characters seem generic though.

And that romantic plot device of what happens after a battle. And there seem to be a couple of inconsistencies like when the glasses girl reveals her 'Phi' in the classroom. Unless she's above the 'law' because of her position :/

Pretty damn funny and good!
by Spearsmen620
June 28th, 2012, 1:43am
Rating: N/A
With the 106 page premier chapter out, I am hooked! I am hoping that this manga does not disappoint unlike some other mangas that have great opening chapters and then derail. This manga deals with summoning monsters that you get from acquiring some sort of data. The main protagonist, Tora, is a laid back comedic guy who is dead last in rankings due to never showing up on test/ranking days. His childhood friend comes back and is ranked quite high and challenges him to a duel and whoever loses has to forfeit their data. BUT WAIT! Data transferring can only be done through mucous membranes touching/ through an exchange of bodily fluids(ie. Saliva). So it would suck if a guy lost to another guy... =.=

Anyways, this manga is too early to rate, but I have great expectations from this manga.
Was this comment useful?  Yes