Login to add items to your list, keep track of your progress, and rate series!
Description
Deep in the forest-covered mountains is an all-girls school, attended by children from only the richest and most prestigious of families. Here, the girls are raised to be perfect young ladies, cut off from the real world to preserve their innocence and ensure that they're free from all distractions. This policy of isolation is a double-edged sword, however, for after graduation, students of the academy often struggle to adapt to a world that's totally different from their cloistered school life.

To combat this inevitable culture shock, an average teenage boy, Kagurazaka Kimito, is kidnapped ... More...
Deep in the forest-covered mountains is an all-girls school, attended by children from only the richest and most prestigious of families. Here, the girls are raised to be perfect young ladies, cut off from the real world to preserve their innocence and ensure that they're free from all distractions. This policy of isolation is a double-edged sword, however, for after graduation, students of the academy often struggle to adapt to a world that's totally different from their cloistered school life.

To combat this inevitable culture shock, an average teenage boy, Kagurazaka Kimito, is kidnapped by the school to provide its students with knowledge of the outside world. Forced to enroll against his wishes, Kimito must now attend classes in a place where his very manhood relies on keeping the girls happy. Can one regular guy possibly survive in a fearsome, all-female student body? Less... 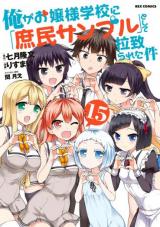 Note: You must be logged in to update information on this page.
Forum Posts Click to view the forum
Series axed
over 3 years ago

No worth for my time
by Alibaba_Saluja
August 12th, 2017, 10:48pm
Rating: N/A
The story revolves around a boy that been abducted to wealthy and prestigious school consists of female oujo-sama like....(read synopsis). There, Mc's founded a club of commoner with some girls. After some time, all girls members of the club including his childhood friend and a maid assigned to him feeling in love with Mc but had some sort of Tsundere personality. Much pitiful, Mc's so oblivious with the feelings of girls for him. WithTsundere girls and dense boy as focal point of the story, we will got endless loop of the story. Never ending. This manga should just already finished

feel free to read this manga but i'll pass. its not my cup of tea.
Was this comment useful?  Yes

fuking hilarious
by xeno01
January 2nd, 2016, 4:14pm
Rating: 10.0  / 10.0
I love this manga its stupid funny what the mc make aiki do sometime just kills me. N each character is likeable in their own way. sure it doesn't really have a deep meaningful story line and sure it is a cliché sometimes with characters you've probably seen somewhere else but its definitely funny with a story interesting enough for me to want to read more... you would not believe how many time ive caught myself laughing with tears in my eyes. its not crap at all if anything it is fairly likeable.

Firstly, Comedy: Yeah, the only thing funny bout' this is guy gets beaten up by a stupi... erm "Pure" Girl by smacking him for the lulz... NOT! Only a masochist would like this.

The maid, Oh how much I detest made like those to their own master. It's not even funny with all the homo stuff they keep saying...

This is just plain horrible even If I don't particularly like Loli, but I read romcom better than this.

Its good. Not as highly ecchi as it looks.
by Padawan
August 19th, 2014, 2:35pm
Rating: 10.0  / 10.0
I agree with just1moreazn below; the comedy in this manga is a bit different from other romcoms. Lots of hilariously absurd rich vs commoners jokes, and its always fun watching Kimito trolling the 'tsun-pure' Aika~

Kimito the mc is a pretty good-natured and sensitive guy. He's not too perverted either - just a bit, as he has a (female) thigh fetish (not muscle men lulz) but he doesn't show it so often. Speaking of ecchi stuff, this manga's ecchi content is relatively low, not overused (a good thing) and they're sparsely shown. I don't know why the author keeps having the girls show their panties on the volume covers, but trust me the amount of panty-showing is actually not really prevalent in this manga.

I've read tons of romcoms and not many are interesting anymore, but this one is one of the interesting ones. Its simply enjoyable to watch what the characters do every chapter, even more fascinating to see the girls slowly change as a result of the mc

I have to say, eventually similarities with Haganai will start to show, not that its a bad thing though (I love Haganai).
The art is very nice, very cute.

Also, Aika is adorable~
EDIT: I think I like Karen more now oh no~

It is definitely worth reading
by just1moreazn
April 23rd, 2014, 7:28pm
Rating: 9.0  / 10.0
I had my doubts when I first started reading it. But after reading the second chapter and on, I was dying laughing. Maybe it's because I haven't read too many comedy manga's but this one feel's unique. The comedy in this is something I haven't seen done in other comedy manga's. The main guy character is really likable. He is a cool, smart and hilarious one, maybe a little perverted but hey, who isn't. The female characters are the typical nice and fall for the main character kind of ones but the way the author executes them to meeting and interacting with the other characters (especially the main one) is refreshingly hilarious. I hope this manga continues, I really recommend people to give this a try!
Was this comment useful?  Yes

piece of crap
by mystichead
March 11th, 2014, 11:35am
Rating: 2.0  / 10.0
there really isnt anything much of substance except fanservice and EXTREMELY predictable and repetitive cliche events usage

that stuff can be acceptable ..and sometimes even excellent...depending on how much focus it receives and the execution..... this fails in all

if it was a true parody of those things... without completely being dependant on them i could understand

but no ..just no
Was this comment useful?  Yes

Not bad
by drunkguy
November 29th, 2013, 2:28pm
Rating: 8.0  / 10.0
There is a strong spirit of trolling in this story. The world is trolling the male protagonist by tossing him in a school full of helpless sheep where he'll lose his life/balls the moment they suspect he isn't a homosexual. To compensate, he idles his time away pretending to be gay while feeding them useless and often misleading information often making them to do stupid stuff for his amusement. The art is decent though not particularly detailed. This has light fanservice in the nipple-less barbie doll style (magazine scans?). Overall it is pretty enjoyable.
Was this comment useful?  Yes