Login to add items to your list, keep track of your progress, and rate series!
Description
Humans live mostly behind safe walls, protected from the many non-human creatures outside. In this kingdom's walled capital city of Mitera lives an unusual young warrior woman known as Claria. The story begins as she takes a potentially deadly walk alone in the woods, encountering various dangerous creatures. Most notably a lizardman that treats her surprisingly kindly. But what no one knows about Claria is that she is secretly this kingdom's ruler, Queen Vivian.


Volume 7 is a compilation of 8 short stories not included in the official English edition by Udon. 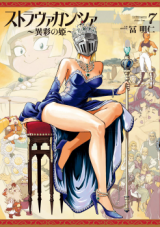 Stunning artwork
by Bebe~
March 27th, 2020, 8:59pm
Rating: N/A
The artwork was stunning. The series was short and sweet. One big plot to solve, and it was over with...nonetheless, it was a fun manga to read.
Was this comment useful?  Yes

Some other impressions also similar to 2nd one because couldn't get pass chapter 1. Until today...

I urge you, please overlook the first chapter. It's only a characters' introductions. It's silly. It's not my cup of tea (ever) and still not my cup of tea at the very end because I'm not comfortable with all the female nudity and breasts/butts aggression from the author. Like a lot of perversion, some might be great "bodies" of work, still too much for me. And that's the only minus point I can give.

The world built in this manga is very much influenced by Lords of The Rings. Of course when the author integrates something new and reflective of our world into it. And it's just enough and quiet succinct the story. The characters are all very likable. The bad guys are at certain level convincing but not invested. For example: one just wants power, becomes a dictator, and watches others burn - not much substances. The other one seemingly smarter and wiser and potentially has a nice back story and a chance to shine as a real baddie or an act of redemption - but no, no explanation whatsoever. Well, at least the main character - the Queen - has a good storyline and certain levels of maturity going on.

For sure if you like the fantasy, action, adventure genres and somehow this manga clicks with you, it will be a very pleasurable, entertaining, intense and satisfying ride for you. Especially if you're more on the side of preferring stunning artwork (me, as long as the story clicks, I'll stick).

At the end of the day, the messages I get out of this is acceptance, diversity, communication and understanding, love, sharing in a place/society/world that everyone can live in and mingle (unless you're foul beasts). But it's pretty Westernised in my opinion - of course I get the setting, I just want maybe us Asian (all okay) to be more prominent. Maybe only a thought and suggestion - it largely depends on the author interests per se. And through and through, although it's a happy ending, a feel-good kind of story (again, you'll definitely feel the tension, the dangers, the stake of war and all that, I'm talking about the end here), there are still rooms for improvement even on the ideals and representations of those ideals in this. At the least, I definitely commend the intentions and efforts from author-san 🙂

Highly RECOMMEND this series (if you like good stories and can get over/digest/have a love for all the breasts and butts).
Was this comment useful?  Yes

A truly boring story
by Seregosa
October 24th, 2018, 1:27pm
Rating: 4.0  / 10.0
It actually has pretty much nothing but pretty pictures and boobs going for it. The story sucks and the queen has no sense of responsibility. Putting yourself in lethal danger when you're in such a position and sneaking out etc. Come on, grow up. This could've been excused, of course, if the comedy was splendid, but the comedy was pretty much nonexistant. It's truly a dull manga.
Was this comment useful?  Yes

Here you will find a well crafted fantasy world with likeable characters, a story that starts light but gets progresively very interesting, imaginative settings and great artwork.

But you might be put off by the metric tons of fanservice. Now, I'm usually fine with a bit of fanservice, but here you get whole chapters dedicated to giantess boobs and similar stuff, chapters that would be best used for advancing the story. Though to be fair, even in those gratuitous fanservice chapters the author manages to sneak some character development or interesting character relationships.

This is mostly a problem at the start where the pacing becomes uneven with the mixture of action and adventure chapters that often end up in tragedy, and fanservice ones that are comedic and relaxed.

Lately the manga has decided to focus more on the fantasy and adventure and has advanced the story quite a bit, so I expect this manga to become one of the most interesting fantasy offers if it can mantain the level it has been showing.

Totally recommended, if the mentioned issue is not a problem, and if it is I recommend sticking with it anyways as it steadily improves as time goes on, to the contrary of what DrManga predicted some posts below.

Update: And as I expected, the tone gets darker and the story much more focused as volumes go on. Fanservice is still there but doesn't get in the way of the plot as before, conflict moves forward in interesting ways and action is given more relevance, and pulled-off very well. If you just started reading this, stick with it as it does nothing but improve with each chapter. The author has grown up quite a bit during Stravaganza, and it will be nice to see what else he does in the future.

Refreshing
by Daisukereds
June 16th, 2016, 3:04pm
Rating: 10.0  / 10.0
A female lead that is not only smart, but also courageous.
The idea of a ruler wearing a mask, that can be replaced by anyone.. greatly written characters that become likeable rather quickly, beautiful art.. and a shadow of a great future. This manga has it all.
Was this comment useful?  Yes

Strange, yet good series
by Mochileiro
June 18th, 2015, 11:33am
Rating: 5.0  / 10.0
It starts like a fantasy manga, with fights and monsters. After it becomes a slice of life adventures. Then it comes back to a fantasy blood manga. Not sure what the next move will be, but it is kinda different and fun to read.
Was this comment useful?  Yes

Great atmosphere
by drunkguy
April 25th, 2015, 1:59pm
Rating: 10.0  / 10.0
Read to chapter 10 so far and I have to say that the setting has a charm to it that I have not seen in many manga. There are elements of slice of life in the early chapters but it has gotten a lot more violent and bloody action in later chapters. This is as fine a fantasy manga as I have seen so far.
Was this comment useful?  Yes

--- November 2nd, 2014, 4:48pm
As of Chapter 5
DarrisonSaber below is wrong, The first chapter had me captivated. It was a great start. A fantasy world with beastmen, beasts and spirits.There was some skin but that's to be expected now days. On finishing the second chapter my hopes got shattered.

One realises there's not going to be a plot here. It seems a random collection of mishaps of Claria, the female protagonist. Of course these mishaps lead to to some skin being exposed and her getting all flustered. Why does she get flustered considering the light haired bimbo walks around most of the time with her ass half exposed.

The mangaka heavily replies on his great artistic skills to draw beautiful women and no plot driven story. Some people have compared it to something out of Heavy Metal and yes the first chapter does appear to be like that, however the rest is something without a doubt 100% Japanese.

So far it does not appear to be plot driven just random tales of Claira antics. Light read, I give it a 5.

A Definite Read
by DarrisonSaber
July 15th, 2014, 10:40am
Rating: 10.0  / 10.0
This is such a great series! The pacings, the visuals, the personalities; they are all so amazing! The only thing that it lacks is a deeper plot. Right now (up to vol.2) it really has been nothing but slaying monsters, defending kingdom, somewhat shonen typical. Otherwise, it's awesome! Wish it would be released faster though D;
Was this comment useful?  Yes