Login to add items to your list, keep track of your progress, and rate series!
Description
Izumi Seita, a gay, introverted, and pessimistic high school student, falls in love with Shinoya Toichi, his best friend. Shinoya is the complete opposite of Izumi. Before Izumi leaves for university, he gets his only chance to hold Shinoya. The sex they had seemed like a dream, but Izumi absolutely refuses to ruin his friend’s life and decides to try and forget about his feelings, even though it makes him miserable. But Shinoya won’t accept his decision… 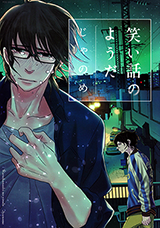 The first two chapters were really interesting and dramatic, after that it was more a slice of life. I would have liked to see them grow and change over a longer period. The author mentioned all the issues gay people face but didn’t go further, although it was the main reason the seme didn’t want to start a relationship with his best friend. That’s why chap 3 - 4 - 5 & 6 felt uninteresting and repetitive. Plus the seme was ANNOYING after a while, wimpy / simp / crybaby characters are the worst when they’re excessive.

Fairly good
by Nyxie4649
June 28th, 2020, 1:22am
Rating: 7.0  / 10.0
I couldn’t bring myself to like that super pessimistic wishy-washy seme, but it was a good read if I overlook my annoyance with the MC.
The artist has a rather unique style & it’s fairly beautiful~
Was this comment useful?  Yes

This sure is different
by OmNom
February 4th, 2017, 7:58pm
Rating: N/A
I like what I've just read for the most part. Love the main couple's chemistry and how each character completes what's lacking in the other. There's quite a bit of philosophy packed in the form of inner-monologues, which could sometimes dilute the flow of the plot progression, but other than that this is a heart-warming and charming manga.
Still wish the book cover could be a bit more subtle and eloquent though.
Was this comment useful?  Yes

Quite Ok
by Serendipity_
July 30th, 2016, 4:54pm
Rating: N/A
The story was nothing special/original and sometimes felt rather confusing. If the author got better at creating a more coherent plot I think we could expect great stories from her/him. Although the plot was lacking, I couldn't help but find the characters likable and the art really good! Character wise, some may think that the seme was too wimpy, however, I thought that was a refreshing idea. I like the strong uke/wimpy seme combo.

I would recommend this as a quick read.
Was this comment useful?  Yes