Login to add items to your list, keep track of your progress, and rate series!
Description
What if you were given the chance to enslave anyone you wanted? "SCM wearers" can do just that, but under one condition: a battle - which can take many forms, not merely physical combat - must be fought, with the victor becoming the master while the loser is forced into being their slave. 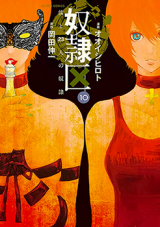 Good dark concept executed schizophrenically
by vapids
April 13th, 2018, 5:22am
Rating: N/A
Disclaimer: I read this online in English so can't vouch if any chapters were actually missing

Early chapters are just okay, but when you get to later chapters you start doubting your sanity in these ways:

1) Did I skip a chapter?
2) Did I forget plot points?
3) Did the scanlators mistakenly title the chapters wrongly?
4) Is manga supposed to be written this way?
5) Is the writer schizophrenic?

I really hope it's number 3, because the later chapters have extremely unnecessarily-jumbled chronology, while at the same time feeling extremely rushed.

Combine this with the many idiotic actions of basically every character in the manga and you get a dumpster fire.

This manga is a dumpster fire. I regret spending time finishing this.
Was this comment useful?  Yes

The twisted nature of a Master/Slave relationship
by harrysoung
August 25th, 2013, 2:32pm
Rating: 9.0  / 10.0
The story is simple. If two people have a device called an SCM (Slave Control Method), they can challenge each other to a game to determine the master (winner) and slave (loser). Master and Slave is used in the LITERAL sense, as in the slave CANNOT disobey no matter how much they want to.

What's interesting about this story is that each chapter features a different person with an SCM and their motives for using it. Some are bored and want a thrill, some want revenge, and others just want to dominate. What's even more interesting is that every single character is related to one another. Main characters from different chapters will make a small cameo or will straight up appear as the challengers for the current chapter. This interconnected structure not only advances the storyline but it also expands on the background of each character, giving more depth to the plot.

As for the art, the cover of Julia was what got me to read it in the first place. I wasn't disappointed.

I feel like there is room for a WHOLE LOT MORE, and I enjoyed reading every second of it. Judging from the quality of these five chapters. I give this manga a solid 9/10.