Login to add items to your list, keep track of your progress, and rate series!
Description
From ANN:

The story follows Kanzō Wakai, a 15-year-old who is considered weird due to his hair which has looked like "dried seaweed" since birth. The boy with the troubled adolescence happens to encounter Noemi Hokari, a mysterious, peculiar girl who believes that she "cannot touch people." Were the "dried seaweed monster" and the "electrified girl" destined to meet? 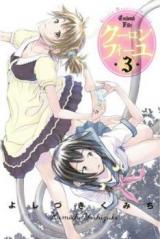 Note: You must be logged in to update information on this page.
Forum Posts Click to view the forum
Someday's Dreamer's Kumichi Yoshizuki to End Coulomb Fille
over 8 years ago

A bit absurd, but it somehow works out
by Joese
January 27th, 2022, 3:51pm
Rating: 6.5  / 10.0
It looks as if the plot was made by a 5 year old kid that had overslept after watching a documentary about electrolysis and they somehow turned that into a heartwarming manga.

Apart from some absurd logic used it's quite nice, they could've perfectly gone without some of the fictional elements,most of the speech and the first half of the first chapter (his father is creepy).
Was this comment useful?  Yes

Spoiler (mouse over to view)
Noemi just disappears on Kanzo and he never sees her again sadly...

It was kinda stupid.
Was this comment useful?  Yes

DANGER! DANGER! HIGH VOLTAGE
by Zoadol
March 4th, 2017, 11:23am
Rating: 8.5  / 10.0
He's a monster. Brutish strength, creepy smile, and seaweed-like hair that will have you literally tremble. He's used to being ignored, cast aside, hated, loathed. Coulomb Fille is a fantastic, criminally short series by Kumichi Yoshizuki with expressionate characters, an incredibly supportive cast (<3 Yurie), and the MC Kanzo invokes empathy in just the first chapter.

All you need to know about the MC is that he's sick and tired of putting up with abuse and staying low to be liked, so he pulls a 180 and rampages against those who he thinks hate him because of his hair(read, everyone).

The gem is of course the titular character, Noemi. She is a kindred spirit, and lives secluded in the mountains because of her particular quirk: she electrocutes those she touches. No room for heroes, yet a saviour all the same as she befriends Kanzo and they find enjoyment in being in the company of another. It's innate to find enjoyment through seeing others fill with joy and wonder, and it pairs well with your own curiosity in learning more about how she interacts with the environment.

Read now, and you'll get a heartwarming tale of two outcasts growing up, learning to accept themselves and venture back into the society that cast them away. Act fast, and you'll get charming scenes that play with the idea of an incredibly electrostatic body, making Gr. 9 science much more interesting.

Anyhow, it's always good fun to have a great character that goes all out, puts everything on the line and for lack of a better term, is a man's man. Yes, there are a some "too good to be true" cases, and we've got to get Timmy away from wells, but it never truly detracts from the enjoyment of the series. The biggest qualm is that the mangaka clearly has something in mind when introducing a particular character, and is blatantly villainized to fill a role.

All in all, the series is nothing too complex, and a great series to finish in one sitting.
Was this comment useful?  Yes

It Was Alright
by plaiin
December 11th, 2014, 8:05pm
Rating: 6.0  / 10.0
The friendship that the two had was rather interesting, and it developed rather strangely into love. It was always uneasy, and never really defined until the end, but it was pretty cute. If you want to read something refreshing and somewhat light, try this!
Was this comment useful?  Yes

Surprisingly good
by sinxer
September 29th, 2014, 11:10pm
Rating: 8.5  / 10.0
Didn't think id enjoy reading this manga as much as a did, the first chapter didn't really hook me in as well as others but it is worth reading. My only regret is that there isn't more chapters as the end wasn't all that satisfying for me because there feels like there's so much more to this story that could be told.

Damit so disappointed there isn't more >.<
Was this comment useful?  Yes

Fun, satisfying read
by auriga
September 29th, 2014, 5:59am
Rating: N/A
Those three volumes sure were satisfying. The storytelling does tend to get a bit contrived as the series progresses but Noemi and Kanzo's relationship more than makes up for it.

That final arc, though: it came off forced and too over-the-top especially when compared to the rest of the story. I had a hunch the story would go haywire the moment I saw the creepy stalker guy. Creepy stalkers that appear out of nowhere near the end of the story are really, really terrible plot devices.

Spoiler (mouse over to view)
Bulletproof hair? SERIOUSLY? The gun turned out to be weak, but still.

Had Yoshizuki-sensei chosen to wrap things up more naturally I probably would have put this in my top manga list.

But yeah, overall this series is worth checking out. Two hours well spent.

PS: While I am satisfied with the ending (seriously, it isn't hard to imagine what comes next), it seems a self-published continuation is in the works. I guess that is something to look forward to.

Cutest thing ever!
by zimzimbadabim
June 20th, 2014, 9:31pm
Rating: 10.0  / 10.0
This is one of the most romantic things I have ever read. EVER! I can not fully describe how big a fan I am of this series, and I wish that the updates would come a bit quicker. There hasn't been one in over a month; hope the series hasn't been dropped.
Was this comment useful?  Yes