Login to add items to your list, keep track of your progress, and rate series!
Description
Momochi Himari, despite being an orphan, unexpectedly inherits an old house. Despite warnings she receives on the Momochi House being haunted, she decides to go live there anyway. She soon learns that the house is already occupied by three somewhat strange men, Aoi, Yukari and Ise, all of whom may or may not possess supernatural abilities to combat evil spirits. What happens when stubborn Himari decides to stay, despite being told to leave? 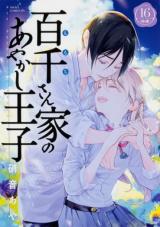 The Demon Prince of the Momochi house.
by Shellshock
May 9th, 2021, 1:15am
Rating: 7.0  / 10.0
This is a story of a random girl named momochi who at the age of 16 (which is considered marriageable age for women *wink*) owns the momochi house, which is more like a huge fucking mansion., However inside already live some freeloaders such as the Male lead (Aoi) and a buncha slaves he owns. This is one of those nice masters where the slaves want to serve the master kinda thing. Of course it had to be like that otherwise he wouldn't be the male lead.

The reason they live in the house is because the Momochi house actually chooses someone to be the guardian the house and gives them immense power. Momochi was supposed to be that chosen one but Aoi accidently stumbled inside instead and became the chosen one instead. Which lets Aoi who is a hot dude with a pointy chin, turn into an even hotter dude with an even pointier chin but this time with wolf ears. And essentially they are Monsters that help other monsters or dispel them. You probably know the deal by now. So now you have this 1 girl living with 3 and a half men under 1 roof. She slowly gains feelings for Aoi and vice versa. So the characters past and story is slowly revealed as more and more of there relationship is affirmed throughout the series.

I think the series strongest point by far is the art. Similar to Kono oto tomare the art of this series is just fantastic. The imagery and amount of detaill leaves little to the imagination. The author im like 50% sure was just showing off at one point. It kind of sucks the story just isn't as strong as the art that the author potrays. What i love about the series is pretty much the characters. The relationship between Momochi and Aoi is very adorable. The side characters are really entertaining to watch too. Kasha the main villain is a bit on the weird side. He is pretty much the villain character in the series but only really shows up when the plot needs to start moving forward. Which makes his entrance and exists pretty jarring.

The series also had an issue with pacing. Being somewhat jarring. Like i mentioned with Kasha, things sorta just happened to move the plot forward. Why didn't these things happen before? well thats how the author wrote it you silly billy. These inconsistent moments really only took a hit on the overall quality of the series near the end however. There is this suspension of disbelief that happens in every series. In this series specifically the author mainly uses the art to increase that suspension as to hide the inconsistent moments. However this is just too much near the end where everything becomes a little to jarring and weird for no reason.

The ending of this series is also quite a bit odd. Mostly because stuff just happens and quite some stuff was left unanswered. Its this randomness that pulls this series down. Some of the characters are also straight up forgotten, because im pretty sure the author also forgot them. In regards to the randomness, There is foreshadowing done right with the lantern scene. Scenes involving the lantern felt legitimate and natural but in comparison the other scenes felt really weird and out of place.

Despite these mistakes i still enjoyed this series. Yeah it had its fair share of problems but the characters were good, the story slowly unraveling was interesting. and the art was phonomenal. I've seen people mention this series and call it a weaker version of Kamisama Kiss.... and yeah thats pretty much what it is. But I would still recommend it. Even if you have read the Kamisama Kiss.

TLDR: Shit happens cuz the author wrote it that way. Everything else is what makes this worth reading. 7/10

Good HECKING art but story is also messy as HECK
by Lifelikegirl
August 25th, 2019, 8:04pm
Rating: N/A
Not on equal par as Kamisama Hajimemashita, a good read if you’re not looking for somethkng high quality
Was this comment useful?  Yes

Confused but still gives this manga a chance
by Haribote
May 7th, 2019, 11:16am
Rating: 5.0  / 10.0
I'm just going to honestly say it but I hate it.Is it the characters? How their relationship develops? The dialogue? Or how it is transitioned? I don't know. The reason I'm confused, well first of, it's labeled as harem(some reverse harem). I might be blind but I guess I am. I can't seem to see it. All I know that the ayakashi LOVES Aoi so much(well some of them). Though I'm no expert at harem since I dislike reading those, yet I was hooked into this.

There are times that I love the characters, how the story is paced, and how the characters interact with one another but dang it! I can't help but dislike most of those parts more.

Yeah, sure Himari is a strong girl(in a way) but I find her character weak. I know she gives purpose to Aoi; but same goes to Aoi, she gives him purpose but he gives up easily and would run away with him full of secrets. Geez. It's frustrating how these characters sometimes interact. I'm just confused on what to expect anymore. I've come this far reading this; whether I'll regret it or not, I'll finish this.

I believe the only character that I love is Hakka. In my honest opinion, he makes sense in the story.

Artstyle is beautiful. Love me some supernatural tag which made me read this. Hopefully this could end well. I'm giving my high hopes since this has potential.

Girl power!
by toshirodragon
July 19th, 2016, 4:17pm
Rating: N/A
The art is gorgeous, especially the yokais and the story is top notch. Himari is a bit annoying at first, but she's been forcibly thrown into a world she didn't know existed and after some wishy washy heroines *cough Black Bird cough*, it's great to see a strong, even headstrong girl lead.

What a Waste
by NoOneSpecial75
July 7th, 2015, 5:14pm
Rating: 5.0  / 10.0
The five points are for the art. Shouoto has a nice enough drawing style, but the story is so corny and contrived that I just can't take it seriously. If you're looking for a series that lays on the fan service straight out the gate
Spoiler (mouse over to view)
Aoi is naked half the time and we're never told why, he sneaks into Himari's bed the day they meet, etc
then you might like it, but if you want something with more subtlety then this probably isn't for you.
Was this comment useful?  Yes