Login to add items to your list, keep track of your progress, and rate series!
Description
This manga is about the black cat "Kuro" and the lone girl "Coco" living together in a large mansion. Cute, fun and somehow eerie... Check out this full-color manga full of mysteries! 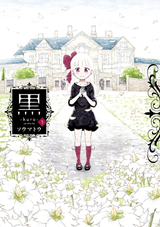 And nothing happens to him. He just gets away with it. The ending is just the MC going "oh, okay then" and then acting like nothing happened. What the actual fuck! Actually maybe the MC got brainwashed by the pedophile priest guy or something.

The rest of the story is just wacky hijinks with the monster cat pretending to not be a monster. It has no depth whatsoever. If you want a supernatural SoL read Acony instead, it's 1000x better than this manga.
Was this comment useful?  Yes

What a pity that this got axed
by Meins
October 14th, 2020, 3:54pm
Rating: 8.0  / 10.0
IMHO the Manga got axed in middle of volume 3, the pace of storytelling change a lot in middle of this volume dramatically. So, no wonder this manga get at the end a rushed, uncompleted felling. What a pity.

First the art is satisfactory good, not extraordinary but good. The full color style are a good choice for this setting and it's done OK. In this Manga old people are drawn differently than young. Almost none Mangaka nowadays can draw a old mans or womans face, the simply draw the same face-outline as for young people and add a beard or some half-assed wrinkles. Here we have different styles of face-outlines for different people and it's drawn good enough, which I appreciate. The movement of peoples and things is pictured almost every time understandably and correct, so you won't find here panels with something drawn, as pseudo movement or the like, which has to be guessed what it is.
So, a 7,5-8 out of 10 for the art (not quite sure until know).

At the beginning the story, and especially the world building, develops in a very slow pace. Later it get more momentum. And the dystopian character of this world unfolds first in very causal way, later with the power of a sledgehammer with a cute ribbon. The axed ending made this Manga lose at lest a whole point in my overall Rating. I could only speculate here but would say the 2 Mangakas wanted to make at least 4 volumes not 3. The World described in this Manga is a original work of the Mangakas not a 947th genre copy. IMHO the Mangakas has put some thoughts in the world before drawing. And wanted to tell even more about it than already done, but haven't get the time to do so. The last part (how the world works) was IMHO not really needed, but it's OK.
For Story I would give 7.5 out of 10.

But in overall, I liked the first 2 volumes much, the 3rd destroyed little bit of the good feeling, but still. So, my overall Rating is 8/10, also because axed endings is most of the times not Mangakas fault.
Was this comment useful?  Yes

review
by BeAsOne
April 19th, 2019, 5:00am
Rating: 4.0  / 10.0
Beyond the pretty art the story is predictable, repetitive and the dialogue flows unnaturally. Nothing is accomplished. Nothing is gained. Nothing is achieved.
Was this comment useful?  Yes

A Beautiful Story
by Dalis
November 2nd, 2017, 11:57am
Rating: 10.0  / 10.0
I came up from the story by accident to be honest I'm really glad I did. This story is about a little girl who lives in this great big house with her black cat, Kuro. The Mystery the story has was intriguing and had you on the edge of your seat to try and fit the puzzle pieces together to see the big picture. It was a beautiful story and the fact that the girl was lonely and this huge house with only herself in the small cat but still found the will to smile everyday couldn't help but make you feel as if anything it's going to be okay if something's there to keep you from being lonely. The ending was of mixed feelings and had me crying from the feelings that it pushed into me. It wasn't as much of a sad story as much as wistful but still happy. I would recommend this for anybody looking for a good but kind of short Reed. This is one of the stories that were highly rated by me because I am such a picky reader.
Was this comment useful?  Yes

Really Good
by LUEser
April 16th, 2017, 8:49pm
Rating: 10.0  / 10.0
Extremely simple read that depicts the everyday life of a little girl and her oddball black cat that seems to be possessed. The most unique part of this manga is the transition: it is not a one-flow storyline but rather the every page is consistent of with how she spends her day and how the people secretly treats her. Great simple art that you can appreciate along with the simple story. It's actually a pretty good take of parasitical possession.

Take your time to read it. You won't regret it.
Was this comment useful?  Yes

Good.
by MondSemmel
August 20th, 2016, 1:05pm
Rating: 8.0  / 10.0
This manga had an absolutely great beginning, with the first half essentially being a genre mashup of both cuteness and tragedy/horror/apocalypse. The world itself is like a subdued, moe version of the setting (though not the plot) of Attack on Titan.

The second half of the manga, in contrast, feels far too short, and the ending in particular could have easily been 30+ pages longer than it actually was. The world just seemed kind of under-explored. A pity. The result is a good manga, but it could've been amazing.

Eery yet strangely heartwarming
by Dr. Love
August 5th, 2016, 4:04pm
Rating: N/A
This story has a unique unsettling way of making you think something is wrong but you can't quite put your finger on it. The cute character designs contract nicely with this ominous atmosphere. Being entirely full-color makes it stand out and the short length makes for a brief entertaining read.
Was this comment useful?  Yes

Bizarre, beautiful, frightening, adorable
by cecropiamoth
April 6th, 2015, 6:23pm
Rating: 10.0  / 10.0
There are few things in the world more frightening than cute little girls in danger. When the girl does not KNOW she's in danger, and displays the happy innocence of a child who's always been safely cared for, it's worse. For that reason, this story would be very hard to read, if it weren't for one additional factor -- the amazing drawing in this manga, which consists mostly of gorgeous full-color pages, featuring the cutest children imaginable, and lovely, impeccably-rendered settings.

I don't know how this is going to end, and I fear a sad, maybe awful, outcome, but in the meantime I see this story as symbolic. Life often places bad things around us that we don't notice. Only in retrospect do we see they were there. And sometimes we also see that our blindness at the time was blessed.

This is a very rare kind of manga. I think it provides just about the highest manga art I've discovered coming out of Japan, surpassed in my experience only by YOKOHAMA KAIDASHI KIKOU.

Interesting
by bakerygirl
March 9th, 2014, 5:23am
Rating: 9.0  / 10.0
That's all I can say for now. The story revolves around a girl, Coco, and her cat, Kuro. The cat doesn't seem very much like one though. Though, the readers have been given many hints till now, I haven't been able to arrive at any concrete conclusions. But my speculations are going to keep me occupied. looking forward to more of this ^^
Was this comment useful?  Yes