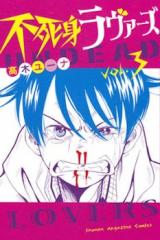 Decent mystery/love story but axed
by Theoneyedsnake
June 26th, 2020, 7:24pm
Rating: 7.0  / 10.0
The story was great, the art was decent enough to bring about the feeling of insanity and emotions.

The story kept me captivated as it had mystery/supernatural elements that kept me wondering, while being able to maintain comedic and serious tones when wanted.

However, the story had been axed. So the mystery that was going on throughout the story will never be solved. It essentially ends in a cliffhanger.
Was this comment useful?  Yes

Ok so part 1
by sinxer
June 14th, 2017, 1:10am
Rating: 8.4  / 10.0
Don't normally rate or review part 1's without reading all the other parts as well but I was unaware there was going to be a part 2(pleeeeeeease be a part 2 o God please). First I found the disappearing lover routine really good, watching the mc try and make he fall for him over and over despite who/where/age was brilliant you'd think it get repetitive but she's completely different each time so it's almost a series of one shots with recurring characters(Almost lost it thinking they changed her "condition" during the one day amnesia rino). Chapter 10 was so brilliant I could not stop laughing but after I did calm down it did make me feel that the mc wasn't simply chasing the face of his disappearing love but their soul. Cant wait for the next part!
Was this comment useful?  Yes

Fantastic in its first half.
by MondSemmel
April 19th, 2017, 1:05pm
Rating: 8.5  / 10.0
There's much to love about this manga - the protagonist's pure obsession with his love is a delightful change of pace compared to the typical protagonists of harem manga - who are either perverted, or absurdly hesitant.
The central mystery also allows for a remarkable variety of romances. The love interest ostensibly remains the same, but in practice they're different each chapter, sometimes surprisingly so.
Finally, the protagonist's heartrending despair is depicted wonderfully as his body metaphorically falling apart, or having a heart-shaped hole where his heart is supposed to be, etc.

Why don't I rate this manga as a 10? Because it fizzles out by the end - by the second half of the manga its chapters become a bit formulaic, and more importantly, the central mystery is never resolved. I found that really annoying - I don't think it would've been all that hard to bring the story to a satisfying conclusion, but I felt a bit let down by its merely okay-ish end, and its unresolved mystery.
Was this comment useful?  Yes

just when you thought can the author bring more to this complicated love story, the mangaka just bring it to the next level.

the ending is so heart wrenching. this really is star crossed lover in a whole new sense
Was this comment useful?  Yes

Unique and quirky experience, but definitely feels incomplete
by Imouto-chan
March 26th, 2017, 10:29am
Rating: 7.0  / 10.0
I just finished reading the last chapters of Fujimi Lovers and I have to say it was quite a wild ride. The mangaka knows how to keep pushing the envelope on the protagonist's ability to love Hasebe Rino, and with each iteration of her I felt more and more invested in his journey and wanted him to succeed. I doubt I will ever see someone with such a strong love so soon.

Not only that, but the way the author presents the humor and sets up the punchlines is pretty amazing and I don't think there are many manga out there with insane, out-of-nowhere punchlines such as this one.

However, the manga ends on a very open note, clearly implying there's supposed to be a sequel, and without said sequel this story is just incomplete as we don't get to learn much about what is actually happening to the characters.

I recommend people read this manga for a different kind of romance experience, but I also warn anyone who goes into it that there's still a lot left to be told and all we can do is wait for a supposed part 2.

Original Idea
by sarin68
April 17th, 2015, 3:39pm
Rating: 10.0  / 10.0
I've read some reincarnated lovers before, but this one takes the cake. Lots of props to the protagonist and his undying love for this chick, even when she's much younger than him.

EDIT: finally read the last chapter and HOLY **** does there need to be a part 2. It said "Part One" so there should be a part two... right? RIGHT?!

its almost like a series of one shots with a similar outcome each time. for me, it stopped being sad around the fourth or fifth encounter, though the last encounter did surprise me. (and i can't find any raws past c11).

the stories are pretty engaging in and of themselves but in the end i was left with a sense of confusion and frustration. the metaphors and subtext (as well as overt text) about love aside, i was left scratching my head with whole lot of

if the over all aim was to bewilder the reader, then it succeeds admirably.

i can't rate this one because i can't figure out if its done or not.
Was this comment useful?  Yes

Too bad it's sad as fuck. God damn it, the worst are his internal dialogues and reactions when shit hits the fan. I'm really rooting for the guy, but it really is heartbreaking to see him suffer.
Was this comment useful?  Yes

Beware If you are looking for a light hearted comedy, the humour here is kind of twisted- that is, if your definition of funny is seeing the MC's heart being broken and stepped on by fate over and over again. Nevertheless, the story is very compelling ( not really cliche at all), the characters are very likable, especially the MC, he makes you want to root for him so much!

The manga also ends with a very very surprising twist.

Fujimi Lovers actually reminds me a bit of Watemote, every chapter you just hope everything works out, but it doesn't and in the end, a little part of you dies inside

I even cried when I read the ending. Overall an excellent read, I totally recommend it.

I read somewhere that the mangaka is going to write a sequel, if it comes out in the near future, I'd totally jump at it.

So fresh
by jackblk
October 8th, 2014, 11:00am
Rating: 10.0  / 10.0
The idea of this manga is beyond what i thought when i read the description. This one is one of the best at the moment, it gives me new light in the darkest room full of the same mangas.
Was this comment useful?  Yes