Login to add items to your list, keep track of your progress, and rate series!
Description
From Storm in Heaven and one of their legacy groups, Bamboo Feathers:

In ancient China there exists an alternate dimension called Jusenkai, whose inhabitants, the Senkaijin, possess tremendous powers. One of them, YanLang, fled to Earth along with his rebel army after being defeated during his attempt to overthrow the Emperor. In order to capture the fugitives, the Emperor sent his elite soldiers to Earth after them.

LiFang has been traveling alone to find his father's murderer when he picks up a sick and injured man. That aloof man, TuoRen, turns out to be one of the imperial soldiers sent ... More...
From Storm in Heaven and one of their legacy groups, Bamboo Feathers:

In ancient China there exists an alternate dimension called Jusenkai, whose inhabitants, the Senkaijin, possess tremendous powers. One of them, YanLang, fled to Earth along with his rebel army after being defeated during his attempt to overthrow the Emperor. In order to capture the fugitives, the Emperor sent his elite soldiers to Earth after them.

LiFang has been traveling alone to find his father's murderer when he picks up a sick and injured man. That aloof man, TuoRen, turns out to be one of the imperial soldiers sent to earth to hunt and capture the Senkaijin rebels. While his comrades work in pairs, TuoRen prefers to be alone. That is, until the strangely powerful human, LiFang, decides to follow him on his quest. 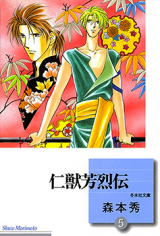 I'm pretty conflicted...
by calstine
April 25th, 2017, 9:12am
Rating: 6.7  / 10.0
...over how to rate this series. I want to give it a 7/10, because a BL manga with any kind of plot extraneous to the romance and drama is an incredibly rare gem, but as someone who's read a lot of fantasy/supernatural, I feel that anything above 6/10 would be very generous indeed, because this is a very generic fantasy series.

Pros: Both guys are strong (physically/mentally) and have an even standing in the relationship, it's shounen-ai but has a completely unrelated plot (which still relies heavily on the two male leads' mutual bond, so BL fans needn't worry), there are some really likeable female characters, the non-romantic relationships are also quite sweet, the animal sidekicks are unbelievably cute.

Cons: Predictable (not a single plot point truly surprised me), too much reliance on "the power of love" to solve serious issues, boring and long-winded action scenes that didn't rely on strategy or even power -- just some abstract thing which gets pulled out of nowhere at the author's convenience.

To sum it up: If you're the kind of person who mostly/only reads BL and aren't much of a fantasy fan, I highly recommend Jinjuu Houretsuden. For everyone else, it's still recommended, but don't expect too much complexity or you'll be disappointed.

Could have easily been WAY longer, I wouldn't have minded

There are characters that were barely used or introduced, but considering the story is about Lifang and Tuoran, it makes sense that they are in the center at all times. Not many mangas do that, so kudos to the mangaka. This truely was a good read. I'd without a doubt recommend it to others (especially if you like josei, as I feel this reads like one).

And for those who don't like shounen-ai, don't worry, it's very much just a bromance (aka they are just really close friends). No romantic actions are shown (other than a half chapter, but even then..).
But to my fellow fujoshi, there is tons of subtext, you'll see

HNNNNNG
by On_vacation
January 7th, 2015, 5:40pm
Rating: 9.0  / 10.0
I can't really describe how much I love this series. There's a strong focus on plot and character development. It really reminded me of Shiho Sugiura's works (such as Silver Diamond and Koori no Mamono no Monogatari) so if you liked those then you'll probably like this too!

First of all, the characters are all really friggin awesome and they're pretty well-developed. There are strong female characters, both physically, mentally, and in the story-sense of the word too! HuLei's and XiangLin's relationship with each other was really fun to read about and their bickering like a married couple was hella nice (when XiangLin kissed HuLei on the cheek and HuLei's all like "HKSGJAGH" was so cute). TUOREN AND LIFANG THOUGH. The whole entire time I wanted them to kiss. Like I could feel it in my very bones, the strong desire for them to at least smooch. The mangaka really knows how to write good chemistry between characters, ha ha.

If you like to watch out for problematic stuff, there's not a lot in the story. XiangLin, despite being recognized as being a very feminine male, isn't subjected to homophobic treatment as a "joke" and even though XiangLin is pretty much a gay man, he's not portrayed as being a misogynistic douchebag (that "i'm gay because I hate women" bullshit). Also, none of the female characters have to deal with overt sexist bullshit like "oh you're a girl so you can't fight." It's always nice to see female mangakas treating their female characters right. Also, the only fanservicey thing you'll ever get is shirtless guys, no shirtless ladies or panty shots or whatever else there is.

But I totally recommend reading it or at least giving it a try? Like I was reading at night time and I was like "I HAVE TO GO TO SLEEP" but I just couldn't stop reading.

And also,
Spoiler (mouse over to view)
chapter 13
scared the shit out of me. The mangaka drew this little monster thingie that WAS SOOOO CUTE, the design was so cute, but the way she portrayed it was pants-shittingly terrifying. I don't even know why I was terrified, but I was terrified. I wasn't expecting it and it scared the shit out of me. It was like waking up cause you hear like a soft crunching noise and looking at your bedside to see a fucking furby staring at you. That kind of horror.
Was this comment useful?  Yes

Awesome!
by sOm1
December 22nd, 2009, 8:21am
Rating: 10.0  / 10.0
I read only until ch 8 this is really good!The art is pretty good too.The story is interesting and make you curious about what will happen next.Once you start reading it you can't stop XD.Highly reccomended!

Definitly worth reading
by crecia-8
March 9th, 2009, 1:50pm
Rating: 9.0  / 10.0
Currently this manga looks promising with light humor and action. The story is easy to follow and the art is nice and pleasant to look at. Once you start reading this you can't stop! I hope SIH will release more chp. soon. I'll give it a 9 for now.