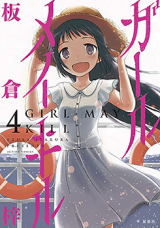 It left me sad
by OmegaAlison
August 2nd, 2017, 12:19pm
Rating: N/A
I wish for a sequel. Somewhere when she like 20. I want to know his death meant something. A lot of you won't like the ending either but it was meant to be.
Was this comment useful?  Yes

Warning: depressing ending
by fig00r
February 1st, 2016, 10:16pm
Rating: N/A
I've read a fair bit of manga with good endings. I've also read a fair bit of manga with bad endings, rushed endings, boring endings and even endings that punches you in the gut. But the ending of Girl May Kill is different. Out of all the endings it could have had (and there were many options), it chose to go for the one that makes me wish I didn't read this thing at all. It made me think "why did I invest time in these characters? What was the point?" Basically, the ending completely ruined what was until then a fairly enjoyable read.

If you're like me, and you think that a bad ending can ruin a good manga, then you want to stay away from this one.
Was this comment useful?  Yes

Rough Ride
by Cheshyr
April 29th, 2015, 4:57pm
Rating: N/A
The thing that strikes me about this manga is how it doesn't glamorize organized crime. It has some fanciful moments, but for the most part it drags you through some very realistic portrayals of broken people adapting to miserable lives in horrendous situations. Good intentions, ignorance, consequences, and how far a mind can bend when trying to cope. I guess you could call some of it smutty fanservice, but it usually just comes across as awkward and uncomfortable.

Not really a light read, but not a bad one either.
Was this comment useful?  Yes

Fine
by RaigonZelo
November 2nd, 2014, 1:48am
Rating: 8.0  / 10.0
Art and story are fine. Plot is mainly about a main who becomes involved with a young girl and a homo man who work for the mafia. The interaction between the characters are enjoyable, and I liked the plot is conflicting. The majority of the plot is fine but the girl's backstory and anything related to it is terrible.
Was this comment useful?  Yes

Sick and Twisted
by great_k
September 8th, 2014, 6:53pm
Rating: 1.0  / 10.0
You must have some sort of psychosis to like this series. The main cast are all terrible people except for the protagonist who has this notion in his head that he has to look out for the school school girl killer. There is some sort of expectation that we should feel sorry for mei because she is a young girl with a tragic past but she is simply a monster who has no qualms about who she kills and is more than willing to get involved in the drug business no matter who's lives it damages. The characters consist of amoral mafioso who simply exploit and trample others and those who become collateral/victims