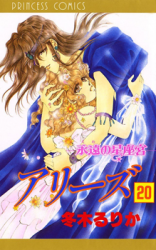 I'd give my firstborn for someone to translate this to the end.
by azariie
June 16th, 2018, 8:52pm
Rating: 8.0  / 10.0
Isn't it a waste there aren't more mangas focusing on Greek mythology? Such rich material and not even US YA novels seemed too interested in exploring it other than Percy Jackson.

Anyway, I've always loved the Hades/Persephone myth. The original telling has enough holes and variants to twist it into so much more than a horrid abduction story without betraying the roots. (Did you know "Persephone" only adopted that name - which translates roughly to "chaos bringer"- after being taken by Hades? And she ruled the Underworld by his side as an equal, unlike Hera o Amphitrite? Elysium was only created by Hades per her request. Yet other tellings note Kore/Persephone just walked into the Underworld and declare herself queen to comfort the souls there.) And, while Fuyuki Rurika didn't waste much time establishing their relationship (Persephone basically falls in love by proxy and it takes Hades about half a day to forget her old lover for her), the background to it it is so much more interesting than the bare bones we are given in the myths.

My one complaint is that the author's insistence on keeping modern-day Persephone in the dark is a real hindrance to the plot and the formula (mythic figure appears - threatens Arisa/Persephone - Amano/Hades saves her without her knowledge or ACTIVELY making her forget his involvement) gets tiresome real quick. We get a breath of fresh air soon enough in the form of Poseidon, but Hades does it's best to keep him at bay so as to disrupt the status quo for... reasons... and it takes a whole another volume for more dynamic characters (Apollo, Athena) to break into our couple cyclic bubble of bickering for no other reason than Hades passion for alienating Arisa every other minute.

It would seem later volumes speed up the pace but, alas, only three volumes were scanlated.
Was this comment useful?  Yes

^-^ love it!
by Tiannu
April 28th, 2012, 6:17am
Rating: N/A
This is an amazing story! It actually made me read the Chinese version so I could finish it...
Sad as it may be, there were some slightly unnesscary misunderstanding between the main couple...
The story is pretty original, except for maybe the shounen cliche 'having a power up at the right time'(though back then it probably can't be considered a cliché)
oh and
Spoiler (mouse over to view)
too many people dies! Like, almost every God except the main couple dies!

Love stories about greek mythology!
by KriIce
April 10th, 2012, 10:30am
Rating: N/A
I also like old ones and I also love how the drawing style reminds me of red river which is one of my favorite mangas. I can't wait to see when she finally remembers her past, and when the two main leads get together. I have very high expectations and am very fond of Greek mythology stories. (love ya Poseidon)

I love oldies
by dancebaby
January 22nd, 2012, 11:34am
Rating: 10.0  / 10.0
Every chapter is kind of a short story within the overarching theme, which I really like. Can't wait to see how the relationship between the two leads develops

The old classical style of drawing is really pretty as well. Thanks Kaizoku for sharing this great series!!