Login to add items to your list, keep track of your progress, and rate series!
Description
While walking around the streets, Momose stumbled upon his classmate cross-dressing as a girl. Ever since then, he couldn't help but to take notice of him in school..? 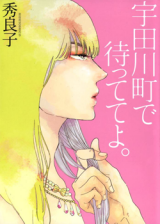 
Serialized In (magazine)
On Blue (Shodensha)

Beautiful Art and Story But
by toastmuncher
February 10th, 2017, 2:53pm
Rating: 9.0  / 10.0
I felt that Momose's character was too forceful and just a tad bit too awkward when it came to getting Yashiro to love him, otherwise it's a 10 for me. Still, I did love how Momose backed off himself and recognizes that he has to treat Yashiro "as something precious", to quote, and apologizes earnestly to Yashiro and takes care of him.
Though another snag for me for the depiction of Yashiro's gender fluidity(?). I have seriously nothing against that but I feel that if one or two pages were given to explaining Yashiro's own understanding of his gender and sexuality, this manga would have been more concrete for me.
Yashiro does have sex with women, he had a girlfriend, and had a one night-stand but now he has a boyfriend, and he prefers men though he is afraid to admit that he is gay. But, you see, then this fear of being gay (which he overcomes thank you Hideyoshico) closes the door on him being able to consider taking any other gender identity.
Also, I know its a yaoi manga so the characters must be gay, but just because its yaoi doesn't mean that a conversation about gender fluidity or inter-sexuality cannot come up. [m] IS - Otoko demo Onna demo Nai Sei[/m] is an excellent example, though important to note that for very good reasons it rightfully does not a yaoi tag.

On a side note; 1 and a half year and one volume of six chapters? o.O My mind boggles at the time duration it took to make this and get it published. I mean, I know that it takes immense time and effort to make some good manga, but when someone breaks it down like this for you, it really hits you. Even though this is nothing.
Also, congratulations Hideyoshico on the live action for this manga.
Was this comment useful?  Yes

Mindblowingly realistic!
by Nitorin
March 15th, 2016, 10:16pm
Rating: 10.0  / 10.0
I can't believe how realistic this manga is. I love that despite having some yaoi and all, the author don't forget to describe the little things that happens in reality. Recommended if you want to have a look at these kind of relationships in real life.
Was this comment useful?  Yes

Dessert
by sarin68
January 9th, 2016, 2:04am
Rating: 10.0  / 10.0
Most yaoi manga have sex be the focus, but this one has it as the bonus. There's so much to love besides the sex it's amazing. Momose and Yashiro are amazing characters and realistic. The gender-bender is done well and deals with non-binary gender pretty well. The romance is also really cute and the sex is just frosting on the cake.

I still need to watch the movie but can't wait until I have the time to watch it! Here's hoping I love it as much as the manga.
Was this comment useful?  Yes

aaaaaw!!!~
by Maria-Ayako
September 1st, 2015, 10:49am
Rating: 9.5  / 10.0
I like sketchy art styles, there is something charming about them~ :3
I was nicely surprised to see realistic gender bender!!~ <3
The two were so sweet together!!! A touching story that seemed real and close to heart!!
There were funny moments, painfull too, blushing main leads, cute clothes and school background~ even some hot scenes!!!
Anyway i really liked it!!! Wish it was longer!!!
Was this comment useful?  Yes

Has a realistic feel to it.
by Ahzinal
August 1st, 2015, 6:36pm
Rating: 10.0  / 10.0
I’m disappointed of myself because of how I can’t find the right words to properly describe the emotions which were awakened by this work.

The changing POV between the two protagonists were always introduced at a proper time that helped further develop the characters in the manga. Yashiro was a strong, distinct character whom I empathize with entirely. I understand his turmoil and fear and I am attracted to the beauty of the spirit which he represents. Having said that, the one who completely won me over was Momo. I loved Momo from the first panel of this manga. The way he falls for Yashiro is a big part of why I love him but I also enjoy his unique and pleasantly quirky character.

All their sexual experiences were properly executed by Hideyoshiko sensei. Sensei brilliantly managed to use many tools (like allowing certain emotions to dominate the scene or knowing when to focus on the crossdressing or not to) to highlight each scene.
Spoiler (mouse over to view)
Ex: The sex in the bonus chapter didn’t have any crossdressing in it. Actually, all the sex scenes were very hot to me.

Hideyoshiko sensei’s art is so captivating especially that colored cover of Yashiro. (In fact, I always fawn over all her colored covers so I’m guilty of extreme bias here.) Momo was right, you can always tell Yashiro was a man which made him all the more beautiful. I would have loved to see how would Yashiro groom Momo and much more but that’s just me being greedy.

Quite frankly, I don’t know how to express myself any better than this. Just enjoy it yourself.

Why is there only one volume!?
by HoshiSama
November 2nd, 2014, 5:36pm
Rating: 9.0  / 10.0
Whhhhhhhy!!? But seriously, it's awesome! I don't usually like gender-bender but this one is awesome. At some point the characters seem to realize and accept that they are gay, which is refreshing

mind blowing ! \o/
by gloriel
February 23rd, 2014, 1:50pm
Rating: N/A
great plot, great characters!!! I just love it! but I have just one little disappointment
Spoiler (mouse over to view)
İ am not against crossdressing or whatsoever but in the end I found myself thinking it would be wonderful if Momose could love Yashiro as just as he is himself. ( I mean he is a young man, he don't have to dress like a woman to look beautiful) and i love the little details that mangaka gives about characters either, like how Momose listens Metal music :) it may not have any effect on story but still...
Was this comment useful?  Yes

A Yaoi lover.. Really Really should read it!
This manga is worth to take some your time!
Definitely RECOMMENDED!