Login to add items to your list, keep track of your progress, and rate series!
Description
1) Ren'ai Han'i 1%
Kagami and Fukamachi are two friends who both secretly love each other, but the other doesn't know it. Then one day, Kagami tells Fukamachi that he's interested in his sister Lisa, upon which Fukamachi then reluctantly decides to take Kagami home to see Lisa. Now Kagami is faced with showing Fukamachi how he feels before he's forced to go out with a girl he doesn't love...

3) Urahara na Koi
Kyouya, a socially awkward college student has trouble smiling and gets bullied at school. What happens when he s... More...
1) Ren'ai Han'i 1%
Kagami and Fukamachi are two friends who both secretly love each other, but the other doesn't know it. Then one day, Kagami tells Fukamachi that he's interested in his sister Lisa, upon which Fukamachi then reluctantly decides to take Kagami home to see Lisa. Now Kagami is faced with showing Fukamachi how he feels before he's forced to go out with a girl he doesn't love...

3) Urahara na Koi
Kyouya, a socially awkward college student has trouble smiling and gets bullied at school. What happens when he stumbles into Akira (a high school student) when he's out drinking?

4) S ni Ochita Seinen
Kyouya (not from chapter 3) is in love with Shirou, his business partner, but Shirou already has a lover?!

5) Don't Worry About It!
Ryuusei has for a long time been in love with the carefree and friendly Nagisa, who on the other hand is oblivious of Ryuusei's feelings for him. The day comes when Ryuusei has had enough and confesses to Nagisa by giving him two options, to become his lover or stop all contact with him. Now, what will Nagisa do? 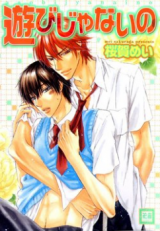 Such a shame
by Mochi__x
August 19th, 2013, 11:17am
Rating: 7.5  / 10.0
As others have also said, the dialogue was a little confusing. I'm not sure if it's just the translation or whatever, but there were times when it made very little sense. Though it's not just the dialogue that irks me, it was the characters themselves that were odd. For example, as MirayAllen also mentions, at first Kagami seems kinda disgusted by homosexuality, then later in the same chapter he sleeps with Fukamachi. Then the second chapter confused me even more, as Kagami basically says he's been in love with Fukamachi for a long time. So why did he act so weird at the beginning? -- Again, I'm not sure if this was a mistake on Sakuraga-sensei's part, or if the translation was just a bit misleading at times, but either way it was frustrating.

The other stories had pretty much the same problem. Almost all of the character's thoughts and actions seemed a bit too disjointed really. It was kinda like they all had sudden epiphanies that we, the readers, didn't get to witness.

Unfortunately the art wasn't Sakuraga-sensei's best either. I normally love her bishies, but this time they weren't up to her usual high standard. Though again I don't know if it was just the scanlation that seemed a bit off, as I haven't seen raws. So it was quite disappointing as I do love her artwork usually.

Anyway, the saving grace to this manga is definitely the 6th chapter. The reason obviously being that both Mikado and Yukimura (from the Warui Koto Shitai series of course) have cameo appearances! ♥ I really do love all the Warui related stories (eg Kirai ja nai Kedo/Mujihi na Otoko/etc), so I really enjoyed their interference in this final chapter. ^__^ So 7.5/10 just for this story (thanks to them!)

Hard to fairly comment on
by OmNom
August 18th, 2013, 10:35am
Rating: N/A
Well, I'm not gonna press on anymore about this manga's issues other than what has been pointed out in the comments here in mangaupdates. After all this was only Sakuraga Mei-sensei's 4th printed volume published at the time and I understand the fact that sometimes a mangaka's earlier works aren't always as refined as their later mangas despite people's hope and expectation. This also applies to many other things in life not just the manga world. After all practice makes perfect, and I'm a person who have sadly realized they have to rely more on experience than impromptu genius moments.

My point is I'm sympathetic with her and don't want to criticize her so much. Thus I don't want to be so harsh on her, especially when I myself have been and probably always will be a fan of her infamous series that's still going on strongly to this day that we all know about. In fact I doubt most of us wouldn't even have known of the existence of this manga let alone read it but for the Warui Koto Shitai series. Speaking of which, I was so surprised I literally shouted out loud when I read the 6th chapter of this manga, which had just been scanlated a moment before I'm writing this. And if you have also read it then come on, I think you know what I mean and should be at least a bit surprised too, the setting is the same from the Warui series! Yikes! Didn't see that coming at all xD
Was this comment useful?  Yes

...
by MirayAllen
May 21st, 2013, 4:02pm
Rating: N/A
The first story felt seriously pointless: best friends gone lovers, are they? We don't really know, since their relationship is hardly developed, either before or after they get together. I can't really sympathize for characters who hold no credibility, who have no charm or nuance, who come across merely as an author's puppets, therefore reaching no one.

I didn't quite understand Kagami's point either, I mean for the sake of the plot itself. In the beginning he can't bear the thought of two guys together in bed, can't even bring himself to kiss his closest friend just for the kicks of it, but then out of the blue he has no problem jumping into Fukamachi's panties, right in front of the latter's sister no less, and apparently he knows exactly what he's doing, so much so that afterwards he shows no signs of regret or... I don't know, reflection? And in the meantime, where exactly is Fukamachi standing, watching as the other sorts everything out?

Then we have what I think someone else has already pointed out: the dialogue. This may just be another of those critical cases where most of the important stuff get lost in translation, but truth is it gets seriously damaging. Between them is like they are not really holding any conversation, and the "voice-over" itself wasn't much of a help, as sometimes it even broke into dialogue as well...

Sometimes I think people misunderstand the term oneshot. Oneshot doesn't mean no depth of plot or lack of character development. That happens when the author just wants to put out something, and anything will do. At least that's the feeling I got from this manga. It doesn't have to be that way. Don't get me wrong, I like Sakuraga Mei -- I love Kirai Ja Nai Kedo and sequels, for instance --, but this one is just meh....

Didn't read the rest of the stories, sorry....
Was this comment useful?  Yes

Annoying
by mlat26
September 21st, 2012, 12:51pm
Rating: 4.0  / 10.0
The plots are disappointing, I kept waiting for the story to pick up but it kept going down hill. Some of the stories don't make much sense. The characters are not likable, most of them are just really annoying and mean. Ugh it was so difficult to finish reading them.
Was this comment useful?  Yes

Stupid
by varianthart
September 20th, 2012, 10:19pm
Rating: 3.0  / 10.0
These were all bad, IMO. They weren't very interesting and I found they moved too quickly to connect with in any way. They're not really porny, nor are they really legitimate stories, so I'm not sure what they have going for them. Most of the characters were completely intolerable and the relationships were anything but cute(more like abusive). No thanks.
Was this comment useful?  Yes

Soooo cute
by HautxTalons
October 1st, 2011, 9:34am
Rating: 10.0  / 10.0
I'm normally very picky, but just because it is so freaking hot and adorable, I gotta give this a 10. Not a good plot you say? Well, I agree it's pretty mediocre, but the way she draws and writes the dialogue makes this very enjoyable. I definitely have a soft spot for this one. ^.^
Was this comment useful?  Yes

Pointless
by Vanadie
July 11th, 2011, 8:48am
Rating: 4.0  / 10.0
Stories like these are just absolutely pointless.
Only read the first story and didn´t even want to look at the others.
I know you can´t expect two much of oneshots, but seriously? The only thing this author seems to want to show the reader is how sex between men works out. There is no real plot, just the messy affair between two former best friends gone lovers. Everything is rushed to the point that nothing seems to make sense. The dialogue is even worse as that the two protagonists always talk about two different things and aren´t even able to hold a normal conversation.
I give the artwork some credit, I rather like Sakuraga´s style. But if you just want to read this manga because of her art I´d recommend a different story. There are better manga of her out there.
Was this comment useful?  Yes

Not bad
by Sasageru
June 4th, 2011, 5:29pm
Rating: N/A
This had some great slap-tstick style moments of humour which really made my day, also some of the expressions the characters have make me laugh - which is always a good sign. In regards to the art, its not bad but can at times be a little involved which might deter some. The stories are entertaining but don't have much depth - which is understandable considering their length. In general these are pretty standard stories, entertaining but without any real plot or depth to them. Enjoyable, but not addictive.
Was this comment useful?  Yes

not very interesting
by pleochroic
March 12th, 2011, 2:36am
Rating: 5.0  / 10.0
there isn't much point to these stories, and they're entirely forgettable. there were some starts that had enough seed for a story, but sakuraga didn't give them enough space to develop into anything; the sex was always way to fast. and alas i didn't find the sex interesting enough to serve well as a mere smut PWP. i can't really assess the art because the scans were overlevelled and blurred. the scanlation was full of really basic english errors (your/you're, their/there/they're) -- i am not blaming the manga for that, of course. alas the raw i could find was also overlevelled, so there's no easy way to find out whether the art is actually better in the original.
Was this comment useful?  Yes

Not Bad; Not Good = Mediocre
by MightyMaeve
November 14th, 2010, 5:20am
Rating: 6.0  / 10.0
The scans were a bit blurry, so my opinion is tempered by my eye-hurt level. Overall, it was mostly a PWP quickie-read with no lasting impression. But I did keep reading, so it got my attention and retained it.