Login to add items to your list, keep track of your progress, and rate series!
Description
It takes all of Yuusuke's courage to approach super cool and brash classmate Mukogawa. But with a casual, "Ok.", Mukogawa agrees, and suddenly Yuusuke is being pulled along at Mukogawa's pace. 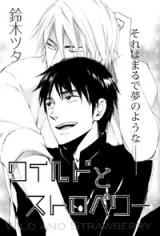 Actually Good
by toastmuncher
April 25th, 2017, 11:01am
Rating: 8.0  / 10.0
While the pacing is kept fast, quite fast indeed, there is a flow to the story, and by using a change in the point of view in the middle for 2-3 pages the fast paced is slowed down a bit.
I was worried a bit in the middle of it where this seemed to degenerate into one of those “naturally untamable male desire” types, however the portrayal of the uke within the situation did not come off as forced nor as was the card of Stockholm Syndrome played. Thus, I am quite happy with this oneshot.
Was this comment useful?  Yes

Average but Enjoyed
by FeyPhantom
January 25th, 2015, 3:30pm
Rating: 8.0  / 10.0
I feel like the plot can be summed up with "teenage hormones". This is a comedic little oneshot not meant to be taken too seriously. The characters are somewhat two dimensional, but it was cute for what it was. I actually thought the seme was refreshing in his point-blank attitude of 'if the sex in the relationship is good, I'm happy.'
Was this comment useful?  Yes

Amazing
by KittyTeea
May 3rd, 2012, 8:42am
Rating: 6.5  / 10.0
I was in disbelief the whole time while reading this. It's so ridiculous that all I could do is stare at it, but it was funny at the same time lol. That guy actually looked for how to do it on the internet, hail wikipedia 😛 . That was the worst and funniest sex scene I've ever seen. What I'm saying might sound like a spoiler, but for god's sake this is an oneshot there's nothing I can actually spoil, just read the dialogues and be amazed.
God I have to stop every three pages just to laugh or get used with the idea. Actually I'm commenting while reading it, which I rarely do and this is an oneshot.
Finally I finished it, though I'm not quite sure how to rate it, it's either epic fail or a gag masterpiece.

hmmmm
by lyrabela
April 16th, 2011, 1:32am
Rating: 7.0  / 10.0
this is my least favorite of Suzuki Tsuta's works. usually her oneshots are amazing so I guess it doesn't quite compair with her other works. But it is still good...a little typical...but good
Was this comment useful?  Yes

there's nothing "typical" about this
by pleochroic
March 14th, 2011, 11:10pm
Rating: 8.0  / 10.0
seriously. this isn't her best work, and not my favourite oneshot, but it's still original. and hilarious. the sex scene had me laughing out loud. the sex isn't forced -- minoru is more eager to have sex than yuusuke, who's mostly still shell-shocked that minoru agreed to go out with him, and who is embarrassed (which sounds typical, but isn't really -- he has good reason to be embarrassed; the conversation is priceless). yeah, sure, in real life i'd be critical of minoru moving so fast and not getting totally explicit consent, but this is humourous fiction; the same criteria do not apply.
Was this comment useful?  Yes

Rough sex.
by PaperSwallow
August 12th, 2010, 7:33am
Rating: N/A
For a work by Suzuki Tsuta, it wasn't as good as I thought it would be, her other works are much better, according to me.

I really don't like the seme-uke relationship and as usual the seme wants to have "rough" sex while the uke is a crybaby. The thing that was different have to be that the uke confessed to the seme first and, yes, he wants to have sex with him, even tho it looks kinda forced...

A good oneshot, a bad Suzuki Tsuta.
Was this comment useful?  Yes

Well I over all enjoyed it. I would have loved to have seen the characters develop more. But it's a one shot. The art is lovely and I thought Mukogawa and Yuusuke were just adorable.

over all I think Tsuta fans would enjoyed it.
Was this comment useful?  Yes

but i want to say that it was fairly cliched and average...
Was this comment useful?  Yes

loved it^^
by foryouinfull
June 7th, 2009, 6:38am
Rating: N/A
wow. I don´t really like oneshots but this one was amazing. The story was so good and the drawings are awesome too.
I think the mangaka should do another chap.
Was this comment useful?  Yes

The characters were nice. I liked the seme.
The sex scene was good, especially what they were doing during. *grin*

Seems to be a oneshot?