Login to add items to your list, keep track of your progress, and rate series!
Description
Shoyu operates a cozy pub called "Tamaya's" in a sleepy part of town. In the evening all kinds of tired office workers gather in his shop to drink away their daily worries. Shoyu has more or less settled down in his lifestyle as a gay bar owner, even though his love life has been rather lukewarm since the incident 12 years ago. What will happen when his past unexpectedly catches up with him? 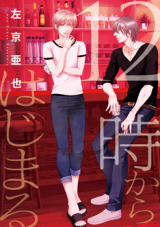 I'm the odd one out
by kurosu_yuuki
January 14th, 2020, 11:08pm
Rating: 9.5  / 10.0
This was my first manga by this mangaka and, contrary to most reviewers, I loved it. In fact, it's been a while since I've read anything that got me this hooked. I didn't stop reading from beginning to end.
But obviously, whenever there's non-con, people are touchy about it. And, as usual, I didn't think they understood the plot - the point was not that Chiharu kept on going despite Shoyu's pain, but that he didn't continue their relationship. If he had, the sex on the rougher side would've been fine. It's not uncommon that it hurts in yaoi, and that normally isn't a problem. The only reason it was a problem in this case was what came after. Shoyu even [i]says[I/] that. What hurt him wasn't physical, but the fact that, after being with the guy he fell in love in, they suddenly became distant.
With that being said, I see the source of the misunderstandings and also why I won't give this a 10. There needed to be more of everything, the past and the future. How their relationship started is barely brushed upon, and I'd definitely like to see how the friendship started, how it evolved into more than that, how their first time came to happen and what it was like afterwards. I also think the hospital was a bit too much, Sakyou-sensei could've left it at the "we slept together and he was gone when I woke up" or something.
The part I do like is their relationship in the "present", and how every little scene is about them and not some filler, funny moment or secondary character's plot. The entire story focuses on them, from meeting again to getting closer again, living together, taking care of the shop and getting intimate. I often read yaoi where there are events which are both fillers and funny, deviating from the main plot, and I find it quite frustrating, but it doesn't happen here.
But then the future and resolution lacks the proper conclusion as well. It should've taken longer than a few pages for Shoyu to realize the real reason he had been feeling like that, longer for him to accept Chiharu again, Chiharu being clearer about what he was feeling in the past and why things turned out this way...and I'm silly, but I'd love to have seen some newly renewed "I love you"s before it wrapped up (side note that the translation I read was pretty bad, so what was translated as "I like you" could've well been "I love you"😉.

I do also like more things about this manga. First, the artwork is gorgeous. Their bodies are amazingly drawn (though Shoyu's ding-dong seems quite small even for an uke lol), masculine but not in a bony, unattractive way (recently read a manga where their knees were so bony in the sex scenes, it distracted me from the smut). Their faces are masculine too, but not bara-like, nor flamboyant and ukeish.
But I love their personalities even more than that. That's what's missing from most mangas I read: men being men. Yes, they are gay, and they cry, this is yaoi and that's what we want to read. But they also have sex, want to have sex, say dirty things. I really like that. It was also quite refreshing to see the uke take the initiative and be confident in his skills, despite the fact that he was a little slutty not being a huge turn on to me. Furthermore, that sex scene with the cumming...omg, you know which one I'm talking about. Haven't read anything that sexy in a while. I was squealing when reading it, which rarely happens anymore.

So yeah, for every 10 bad yaois I read, one of them is like this: dramatic, makes me cry basically throughout the whole thing (which is what I'm looking for), has a pushy seme and wild, pained uke, perfect sex scenes...and that's what's good! So, contrary to popular opinion, I'd definitely recommend this! Go read it now!

Not okay
by butako chan
June 19th, 2017, 11:24pm
Rating: 4.0  / 10.0
As others have mentioned, it's not really okay to portray rape in a romantic light. It's not cute, and I find it frankly pretty unbelievable that someone would be able to form a healthy romantic relationship with their rapist even if 12 years has passed... The fact that the seme continues to intrude on the uke's life even after his initial rejection is already the beginning of a poor relationship. I think the story has addressed some issues of rape, but not really in an in-depth and mature way. Anyway, although the art is nice, I can not in good conscience recommend this manga.
Was this comment useful?  Yes

Yeah, Not Gonna Happen
by toastmuncher
January 7th, 2017, 9:58pm
Rating: 1.0  / 10.0
Why does Sakyo expect Yuu to fall in love, and remain in love, with Chiharu and for us to buy it when BOTH of them keeping doing the same thing again and again? I just cannot suspend my disbelief.
I picked this up because of the art, and even thought that I might give it a 2, but after due consideration, 1 it is. Why? Well, it's not even because of what happened in the past since there aren't enough details to make out what happened but because Chiharu does the same thing again, two times, three counting the extra, and that just takes the characters back to square one.
But, yeah, the art is absolutely beautiful, and the body proportions are fab.

Rape is disgusting, repeat this mantra.
by Serendipity_
November 14th, 2016, 12:14pm
Rating: N/A
I don't understand nor will I ever understand why some authors thinks it's okay to portray rape in a romance yaoi? Rape is rape, there is nothing more vulgar or shitty. Trying to link rape and romance together is disrespectful.

Spoiler (mouse over to view)
The Uke was raped to the point of him being sent to the hospital. The seme shows up and apologizes and tries to put part of the blame ON THE UKE. What the actual hell? I can't even.

Apart from the rape, it would be an Ok manga. I like Sakyou Aya's art. Her characters could be a bit shallow sometimes (shallow as in you don't really grasp their personality), however she kinda makes up for that by having funny side-characters.
Was this comment useful?  Yes

Less rapey than some of her other stuff
by toshirodragon
August 7th, 2016, 2:58pm
Rating: N/A
I'm not certain that I would call the incident in the past straight up rape, for Sakyo san it was fairly consensual. Overall, the resolution was pretty fast, there needed to be another chapter where they actually talked about what happened in the past. But experience has shown that discussion is not Sakyo san's thing, her characters barely understand it's definition.
Was this comment useful?  Yes